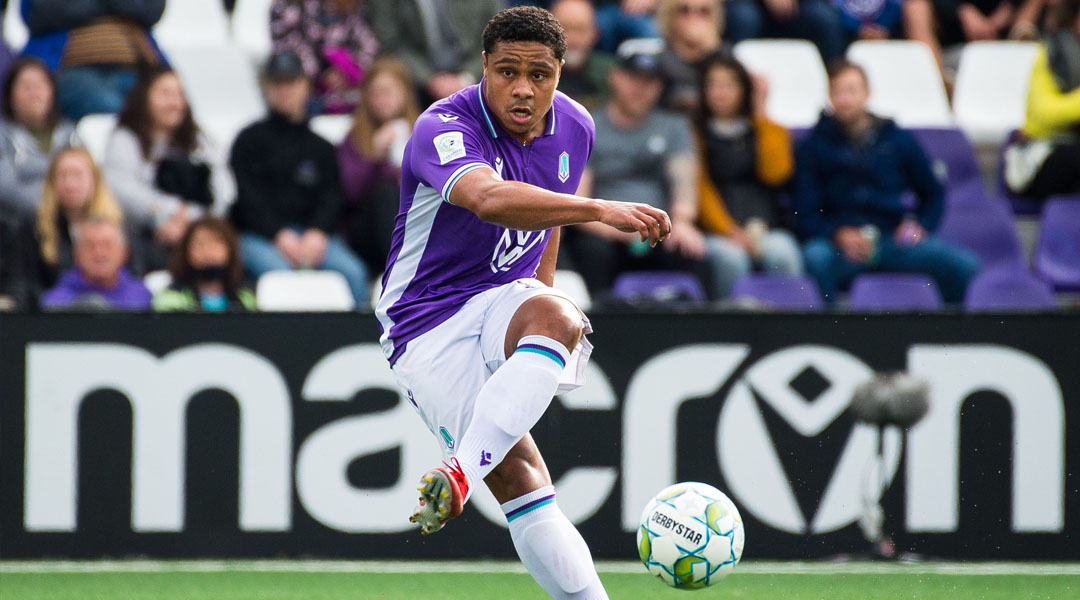 When all-time Pacific FC top goalscorer Terran Campbell was confirmed to be a new Forge FC signing, the news made waves from coast-to-coast.

Campbell, 23, had procured a team-high 25 goals across his three seasons with Pacific, reaching double-digit scoring heights through both of its full-length seasons. Last season saw him put forth a personal best eleven league goals, earning him a 2021 CPL MVP nomination en route to a North Star Shield win.

It was at this point that the striker got poached by Forge FC, where head coach Bobby Smyrniotis had kept a close eye on his progression since the league kicked its first ball in 2019.

“We do a pretty good job of tracking these guys in the league,” the Forge coach told the CanPL Newsroom, “Terran is a player that we’ve liked going back to year one, and just seeing his growth as a player and his ability to put the ball in the net – that’s the biggest thing that he has, and how he takes his position in certain spaces in the attacking part of the field.”

The Burnaby-born forward has spent the majority of his life out on the west coast, developing with the Vancouver Whitecaps and eventually playing for their USL2 affiliate sides VWFC 2 and Fresno FC. He joined Pacific FC for the inaugural CPL season, becoming the first CPL athlete to see his goal tally reach double digits.

“It’s a good fit – it’s a young, Canadian player who has a pedigree in the league, and it fits in the philosophy of what we want here. We want Forge to be a destination club for young aspiring Canadians. That we want our club to be, and that’s how we want players to look at us.”

Terran, evidently, liked what he saw from the Hamilton-based team. He had enjoyed three years out back home on the west coast, but like midfielder Alessandro Hojabrpour, felt a yearning to try something new.

“I’ve been in the league for three years now. For me, it’s about trying something new. I had a really good time at Pacific and I love the club, but for me it was time to move on. I’ve been at home on the west coast for the long time and haven’t really been around, so it was time for me to move on from the club and try something different.”

The striker describes his time in purple with plenty of positivity, thanking the side for giving him the opportunity to excel. “I’ll be forever grateful to James, the ownership, Pa, and Michael Silberbauer back from the first year, and everyone from the organization,” he said, “I’ll definitely remember winning the championship, but also to struggling from first year and the building to winning that championship.”

After spending much of the league’s inaugural spring season in the middle of the park, an injury to Marcus Haber saw the youngster tasked with adopting to a more attacking role up top. A hot spell of form in the fall season saw him him score eight goals in a span of ten games, and he’s been deployed in that role ever since.

While Campbell played on both flanks under Pacific – and Bobby agreed with Kristian that he had the capacity to do so – he seems set to play directly up front in a central role. While Bobby mentioned that he’s keen to see the striker find space between the outside-backs – but not necessarily as a winger – fans can expect to see the 23-year-old play from a fairly central position.

“That’ll give him some space to put himself up. It gives us that tactical flexibility,” says Smyrniotis, who also said the club always wants to improve its lethality in the final third.

When you can add quality attacking to the pieces of a squad that has done a good job of scoring goals and creating opportunities, and we’re able to add a piece in these who’s got a great strike rate, with the opportunities that we create I think Terran’s going to help us a lot.

Campbell himself revealed that he expects to play in a number nine role, stating that he’s at his best when he can float around the eighteen yard box. “We’ll see how things play out,” he adds.

On the flip side, the affirmation that Terran will likely play as a nine lends more credence to the potential departure of Molham Babouli, which has been rumoured for the last week or so. Smyrniotis did mention that one or two of the club’s front line were expected to depart, with Campbell set to come in as a crucial replacement.

It was impossible for Campbell not to keep a close eye on the two-time champions, who are now set to start their preseason in the next week or so ahead of a Champions League debut.

They’ve been a really good club for the past three years, and they play a really good brand of football. I had the opportunity to go there, and it was my time to try something new. They’re also in the Champions League, so it’s a really good opportunity.

The hammers are just over a month removed from a high-profile two-legged bout against Liga MX giants Cruz Azul, which he describes as a good opportunity not only for himself but for the club. “Hopefully we can do well in that game,” he concludes, “and of course we’re going there to win. I’m really excited.”

The Hamilton-based side has confirmed three players ahead of its 2022 CPL season so far, with Campbell and Hojabrpour set to arrive alongside returning defender Dominic Samuel. Most of the squad is expected to return, with further news expected to come in the very near future.