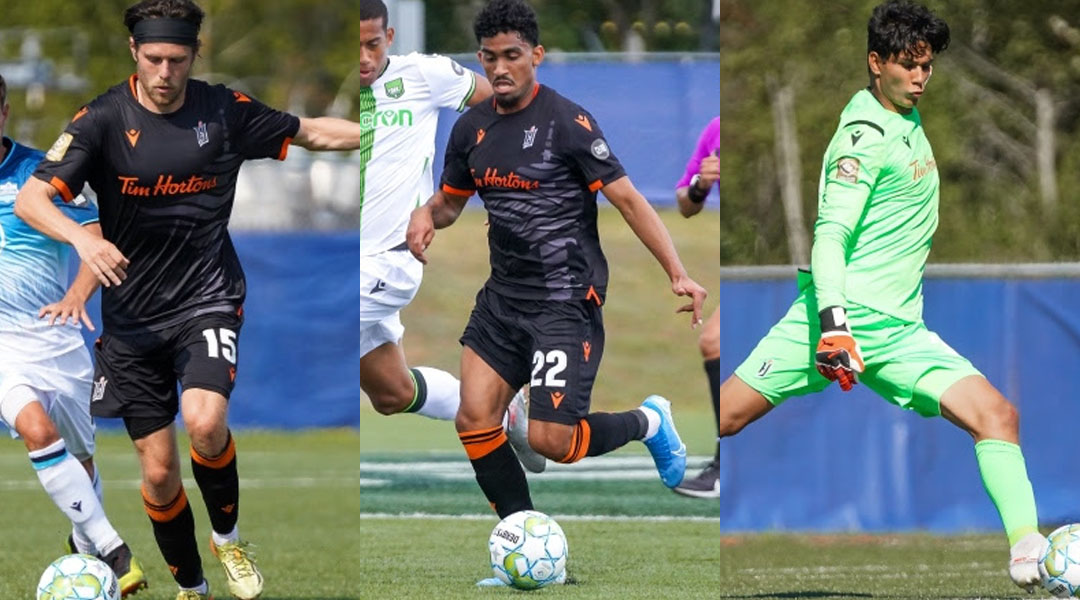 Today, the reigning CPL champions announced the return of Maxim Tissot, Monti Mohsen, and Baj Maan, with the trio set to remain with the hammers for a minimum of one upcoming season.

Former Montreal Impact and Ottawa Fury full-back Maxim Tissot proved to be a big addition at The Island Games, with the 28-year-old taking part in all eleven matches of the bubble tournament, with his sole goal coming in the CPL Final against the Halifax Wanderers.

The versatile Quebecer told us that he was as fit as he’d ever been ahead of the season, which saw head coach Bobby Smyrniotis deploy him as a full-back, defensive midfielder, and briefly up on the left flank, too. He also appeared for the Hamilton-based side in three Concacaf League matches, which included a full ninety minute shift against CD Marathon.

Prior to signing with Forge FC last summer, Tissot had accrued 45 Major League Soccer appearances with the Montreal Impact and DC United, scoring five goals during his time in the US top flight. The five-foot-eleven left-back has also played for the Richmond Kickers, the San Francisco Deltas (alongside Kyle Bekker), and the Ottawa Fury.

Monti Mohsen found himself a talking point last season as Forge FC cut it close to securing its required domestic U-21 minutes, with the utility player accumulating 208 minutes of game time following an injury to Klaida Cela.

The Ottawa-born athlete – who now returns for his third year with the reigning champions – has suited up thirteen times for the Hamilton-based side after appearing once for the Ottawa Fury in 2018. He has played all across the left flank, scoring his first professional goal against Pacific FC in the inaugural CPL season.

Goalkeeper Baj Maan arrives for his second year as a professional with the side, though he was called in as an emergency backup in 2019. The 20-year-old goalkeeper first signed on with Forge FC following the quick departure of David Monsalve last year, with Maan making his debut in a 2-2 draw against Valour FC at The Island Games.

He will be a backup behind Golden Glove winner Triston Henry, with his arrival indicating that former Eddies man Dylon Powley will either land at Valour FC or, more likely, Atletico Ottawa.

Forge FC has now signed eleven players for the 2021 Canadian Premier League season, with Smyrniotis securing most of the core roster in the preceding weeks: Kyle Bekker, Triston Henry, Kwame Awuah, Dominic Samuel, Alexander Achinioti-Jonsson, Elimane Cisse, Jonathan Grant, and David Choinere have all been signed on for at least the upcoming year.

The club will also call 2021 CPL-U SPORTS Draft picks Garven-Michee Metusala and Jose da Cunha to its training camp, while it has also retained the draft rights for Gabriel Balbinotti.

In terms of potential outbound players, Portuguese media is now reporting that striker Anthony Novak is set for the lower divisions overseas, though he could return in time for the upcoming campaign. Centre-back Daniel Krutzen just trialed in Sweden, and would be a key player for the side to re-sign. Fans will also be eager to see if other core members like Chris Nanco or Paolo Sabak will return, too.

With the belated Canadian Championship Final still set to take place at an as-yet-undisclosed date, the club will need to have a matchday roster ready to go in the somewhat near future.

Forge FC did not disclose the financial details of today’s three returning players, simply stating that their contracts will see them remain at the side for at least the 2021 CPL season.