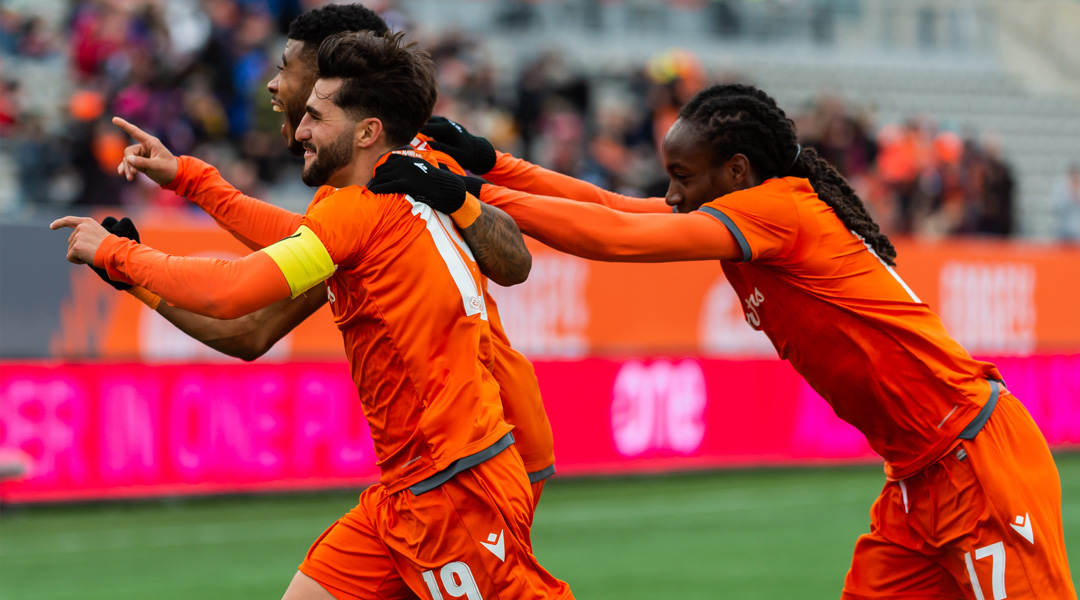 OneSoccer analyst Oliver Platt has suggested that 2019 CPL Player of the Year Tristan Borges could be set for a Canadian Premier League return.

The 22-year-old former Forge FC midfielder set the league alight in its inaugural season, contributing thirteen goals and five assists across 27 league appearances. The Toronto-born athlete scored goals against every CPL club present in 2019, taking home the Golden Boot, Best Canadian U-21 Player, and Player of the Year honours at the 2019 CPL Awards.

He was then sold to Belgian side Oud-Heverlee Leuven in a deal estimated to be valued between $300,000 to $500,000, but staffing changes within OH Leuven have seen Borges limited to just a handful of appearances for the first team, the last of which was over a year ago.

With Borges evidently surplus to requirements in Europe, Platt states that a return to Forge FC may be in progress:

Borges is already back in Canada and has been training in Milton, so the Canadian midfielder is already where he’d need to be to slot right back into a Forge FC preseason camp that is presumably set to begin in the very near future. The Hamilton-based side is set to take on Toronto FC in a belated Canadian Championship Final expected to take place in 2-3 weeks.

As Gareth Wheeler puts it, Borges’ return would seem like a moment of destiny:

I think it would be convenient enough if somehow that announcement came in the next few days, where there’s a little bit of a buildup, a little bit of a runway, for him playing against the club that he grew up playing with, Toronto FC, in his first game back. I think it’s made in the stars, and it’d be something that I’d be fully supportive of.

Borges did indeed spend time with the Toronto FC Academy as a teenager, where his progress saw him earn a call up to the Canadian U-17 national team. After playing well and scoring against Mexico, Borges was invited to a two-week trial with Eredivisie side SC Heerenveen, who signed him to a two-and-a-half year deal as a youth player.

His time there went in a similar fashion to his most recent transfer to OH Leuven: he found himself unable to break into the first team, which at that point convinced Borges to return to Canada and give things a go with Sigma FC. He left Bobby Smyrniotis impressed after his sole season in League1 Ontario, and the rest is history: Bobby brought him along to Forge FC for the inaugural Canadian Premier League season, where the quick-footed midfielder was the star of the show.

After a year spent without first team action, a second stint in the Canadian Premier League would certainly allow Borges to express himself and, perhaps, open doors to a new opportunity – one that he isn’t likely to get at OH Leuven.

With his lack of game time seeing him recently excluded from Canada’s fifty-man provisional roster for the Concacaf Olympic Qualifying tournament, it’s clear that a fresh start is needed, especially considering that he made his debut for the senior national team during the tail end of his Forge days.

While Joel Waterman has proven to be a success story with the Montreal Impact, the other inaugural CPL campaign exports have had a tough go of things too: Tyler Attardo‘s move to Europe has been stalled with the youngster in the midst of a two-year loan move in Cyprus, while Emilio Estevez recently switched from the Eredivisie to the Spanish fourth tier.

If Borges does return, the 2021 Canadian Premier League season would begin with the midfielder tied with FC Edmonton’s Easton Ongaro as the league’s all-time top goalscorer, with each player laying claim to thirteen league goals apiece.

It’ll also be interesting to see where other Ontario-based free agents like Chris Mannella and Ryan Telfer end up, though Atletico Ottawa may just be favourites to sign either of them in comparison to Forge FC, which has retained fifteen players from its Island Games roster so far. The side confirmed the return of former TFC striker Mo Babouli yesterday.

While what ultimately happens for Tristan Borges remains to be seen, there will be a lot of curious eyes to see where the former Forge FC star ultimately ends up – assuming, of course, his time with OH Leuven has come to an end.