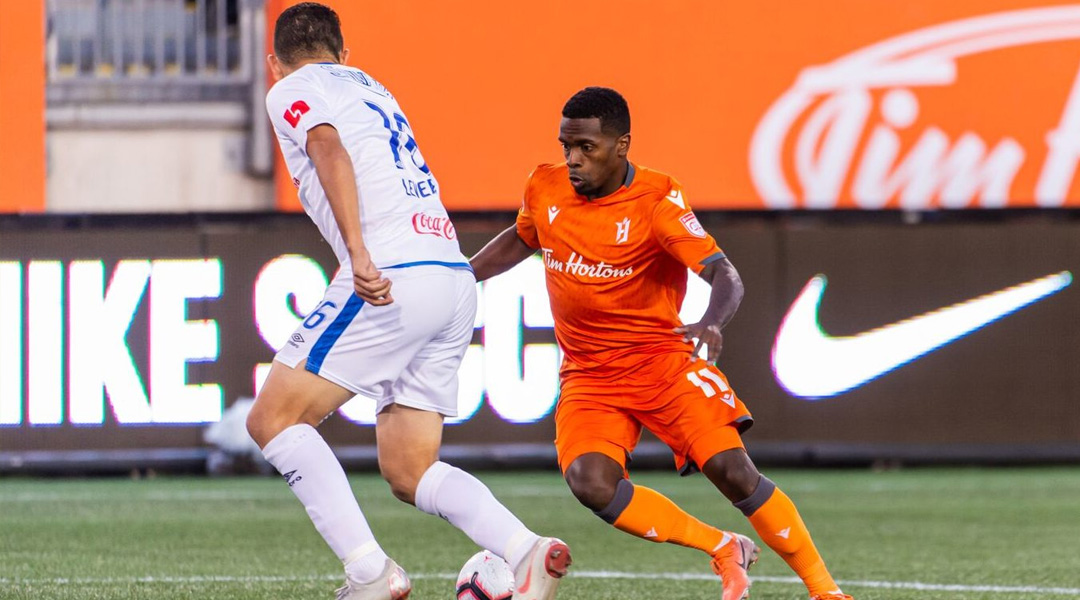 When Forge FC advanced beyond Antigua GFC to reach the CONCACAF League Round of 16, the club knew it had simply reached a new mountain to climb despite the historic result: it now had to face CD Olimpia, the reigning Honduran champions who had lifted the CONCACAF League trophy in its inaugural year.

A crowd of over 4,000 took in the Thursday evening match at Tim Hortons Field, and it didn’t take long for the home side to get off to a flying start: a blistering run from one of the club’s first-ever signings, Chris Nanco, saw the midfielder fire a low ball near-post that found its way beyond Honduran goalkeeper Edrick Menjivar. Four minutes into the match, Forge FC had the lead.

Forge were comfortable in possession as the game progressed, but found itself in danger of conceding an away goal after Giuliano Frano conceded a penalty in the 22nd minute. CD Olimpia defender Ever Alvarado stepped up and struck a good low ball to the corner, but Triston Henry made an impressive save to keep the home team ahead.

Kyle Bekker then nearly doubled the hammer’s lead with a finely struck ball that ricocheted off the crossbar, with Junior Lacayo striking the post for CD Olimpia before an exciting first came to a close.


The second half would see the Honduran champions dictating more of the tempo, with several low driven shots sliding through the front of goal in Triston Henry. In truth, Forge FC is lucky that CD Olimpia couldn’t find anyone on the other end of these frequent crosses: had any attackers connected with them, it could have been a very different scoreline for the Canadian Premier League club.

As the match neared its end, perhaps the biggest scare of the second half came in the form of a mad scramble in the Forge FC box that involved several players from both sides, but it just wasn’t to be for CD Olimpia: Triston Henry kept his clean sheet in the end, preventing an away goal that would have changed the shape of the second leg entirely.

For Forge FC head coach and technical director Bobby Smyrniotis, the match was indicative that the Canadian Premier League is doing its job in regard to giving domestic players a chance to shine where they were otherwise slipping through the cracks:

Look how far we’ve come. Last year, we didn’t have a league; we weren’t playing in these competitions; the majority of these players weren’t playing at this level, and here we are now, in this Round of 16, and now we’ve got a great result here against a historic and great club. That’s the significance of where we’re going, not just here at Forge, but in Canadian soccer overall.

Of course, the battle isn’t over yet: Forge FC will be travelling to San Pedro Sula to play the away leg behind closed doors. While the match was originally poised to play out in front of a live crowd in the Honduran capital, recent club-related riots between CD Olimpia and rival club FC Matagua resulted in multiple fatalities and forced CONCACAF to alter the arrangements of the second leg to keep players safe.

CD Olimpia was forced to travel without the likes of prolific striker striker Jerry Bengtson, who won the golden boot in his domestic league last year. He’ll be expected to make a big impact for the club’s home leg, which will see the Honduran champions return to a full roster once again after visa issues and Pan-Am commitments depleted the squad for its trip to Canada.


Whatever happens in the second leg, the Hamilton-based club has done the Canadian Premier League proud: after just four months of action, the club has contested for its domestic league and progressed further in the CONCACAF League than many had expected. Certainly, many would have guessed that today would end in a blowout win for the visitors, but the fact that the result went the other way is a strong testament to the resolve of Forge FC. It’s all to play for in the second leg.

In the event that Forge FC progresses into the quarter-finals, the club has a fairly good chance of qualifying for the 2020 CONCACAF Champions League. The top six teams from this year’s iteration of the CONCACAF League will qualify for this, though there’s still a long way to go before this becomes a possibility.