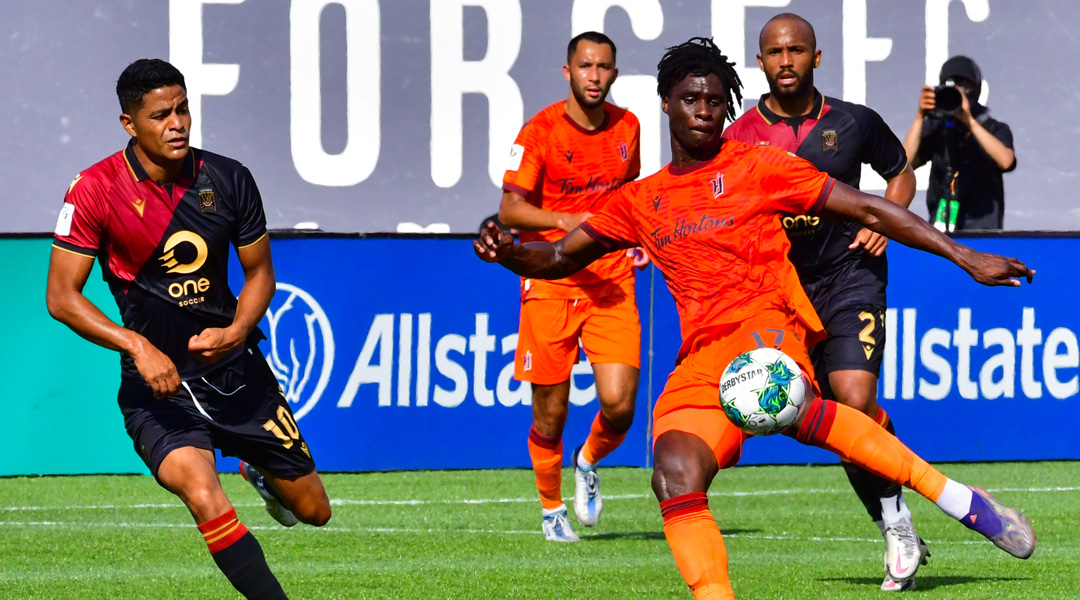 For the third time this season, League1 Ontario and the Canadian Premier League hosted a double-header. Having liked the success of the previous two occasions, the two leagues saw the opportunity to continue hosting these back-to-back matches.

The first game of the day pitted Sigma FC and Hamilton United Elite, with the former being considered as the hosts despite the latter being from Hamilton. Andres Delascio scored a hat trick for Sigma, which made the difference as the Mississauga-based side triumphed 4-1 over the Hamiltonians.

The win leaves both teams on 25 points in the league standings, with Hamilton still ahead courtesy of having won more games. It is looking unlikely now for either team to make the playoffs with just a few games left. They are, however, in a good position in the standings in their hopes to be in League1 Premier come 2024.

The CPL game that followed saw Forge FC exact revenge on Valour, earning a 3-1 win. Having already battled just a few weeks ago, also in Hamilton, things did not go the way of Bobby Smyrniotis’ team back then, who lost to a William Akio strike.

It looked as if Valour would repeat the same trick once more as Moses Dyer got his head on a cross midway though the first half. The Hammers would not let the goal startle them, as they searched for an equalizer.

They got their goal minutes before the break. After David Choiniere’s cross had a couple of deflections, the ball fell to Woobens Pacius just outside of the box. The Forge striker took a touch then hit a sweet shot past Jonathan Sirois in the Valour goal. The strike by Pacius was his fifth in his last three outings.

The hosts got the go-ahead goal three quarters in as Bekker capitalized off a careless touch by Jean-Baptiste, rounding Sirois and setting up substitute Terran Campbell, who slotted it home.

That saw Valour push late on for an equalizer, but unfortunately for them it would not come. In stoppage time, Forge got an insurance marker. One again, a Valour giveaway allowed Aboubacar Sissoko to drive with the ball, slipping it to Emery Welshman. The Forge number 14 squared it over to Campbell, who had the easy task of putting the ball in an empty net.

Today’s action will not be the last of the CPL – L1O double-headers this season, as there are still two more set to take place at Tim Hortons Field in Hamilton: Sigma will take to the field in August, hosting Unionville Milliken. The game later on that day will see Forge host the Halifax Wanderers in a CPL clash.

Two weeks later, Hamilton United Elite will also play a home match at Forge’s venue, as they host Simcoe County Rovers in the last round of the League1 Ontario regular season as playoffs loom. The CPL tilt will feature another 905 Derby, as York United will make the trip to the Hammer on that occasion.

League1 Canada President Dino Rossi has already mentioned and to have a League1 Women’s match also be part of a double-header at a CPL venue. As of the time of writing, there is no game set to partake in one.