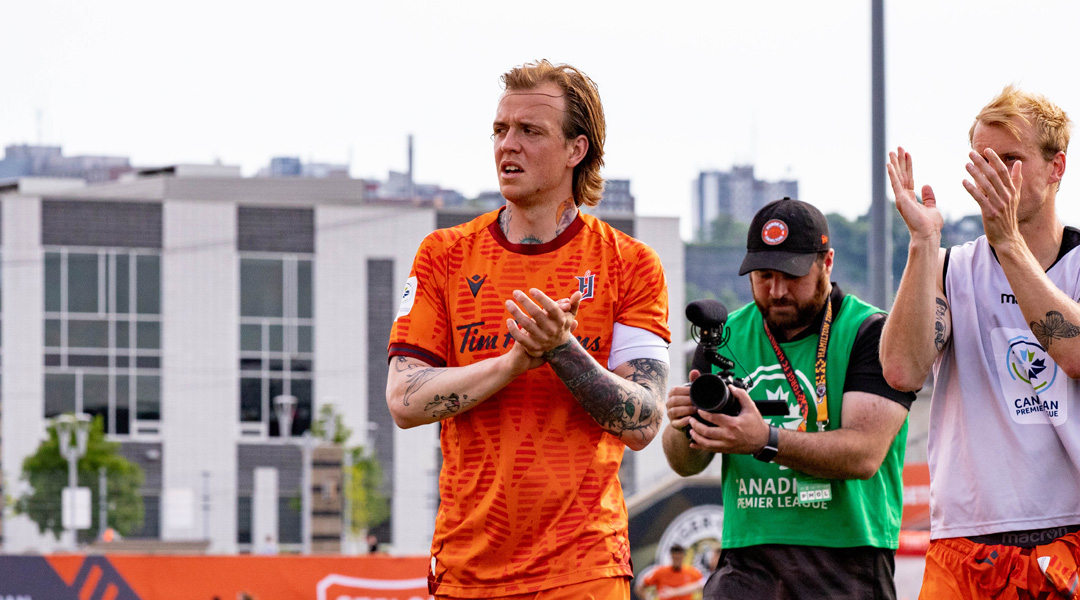 Forge FC now finds itself ninety minutes away from a fourth consecutive CPL Final, which in itself shows how dominant the Hamilton-based side has proven in the first four years of the domestic league’s short existence.

With them every step of the way has been Alexander Achinioti-Jonsson, a six-foot-two defensive midfielder who was asked to play centre-back this year. Diving in with aplomb, he’s been nominated for not only Defender of the Year, but the highly-coveted Player of the Year award, too.

His quest for silverware doesn’t end there, though: with Forge set to host Cavalry in the second leg of the league’s semi-final stage, a record-extending third title is up for grabs – and he played a large part helping the club reach this point.

If someone had told Alexander last year that he’d be a nominee in two award categories this year, he wouldn’t have believed them. Even after a season that saw the defender lead the league in passes while proving 9th and 11th best overall in recoveries and duels, he simply describes it as a ‘learning experience’.

“I primarily played in the midfield last year so I definitely had to change the way I played a little bit off the ball, because as the last line of defense I can’t jump in like I do in midfield, going crazy runs. I’ve had good support from from David Edgar especially, he’s helped me a lot with positioning and how to work differently as a centre-back,” he says. “It’s been it’s been good.”

Good is an understatement, though he’s evidently staying humble as he prepares for the club’s second semi-final leg against league rivals Cavalry FC. Forge battled to a nervy 1-1 draw with Cavalry in enemy territory last weekend, a match in which the double-nominee nearly put the side in front with a volleyed effort that struck the crossbar.

“It is what it is,” he says simply. “I just jumped when when I started to get it, and couldn’t wait for the ball to drop. It was a bit unfortunate to hit the crossbar, but it is what it is.”

The fairly even contest saw Forge dominate at times, though he admits they weren’t at their best in the opening leg – now that things are still even after the draw (there’s no away goal rule), he’s pleased with their chances heading home to Tim Hortons Field where a home crowd will cheer them on.

He knows Cavalry will play aggressively, noting that the two clubs are always keen on a showdown – there’ll be no love lost between the rival sides. He describes it as two different playing philosophies clashing together, which adds up to an intense fixture and one that he enjoys playing in.

Will fans see a similar attacking move from the defender in the second leg? Probably not.

“We have some fantastic attacking players on our team, so maybe me going on a run as a centre-back isn’t going to help,” he laughs. “Where I am really depends on the game plan – I guess we’ll see.”

The Big Swede is expecting a good showing of home support, and the fans in the stands will be expecting a show: these are the moment championship teams are made of, says the defender, and he and Forge are ready for it.

“Every game against Calgary shows they’re a very difficult team. It’ll be a good game,” he surmises. Should the hammer strike on Sunday, they’ll be 90 minutes away from what would be his side’s third North Star Shield, thoroughly establishing Forge as a dominant legacy force in the league. Alexander isn’t getting ahead of himself, but one can’t help think about it.

“It would mean everything. As a club, we want to go finals, we want to play in these big games. It’s been our direction from day one: we didn’t have the North Star Shield or Concacaf games, but we had the mindset that we wanted to, and we achieved that over the years. I think this is a big part of our identity in pushing for those big games, and we’ve been lucky enough to have great, great performances that led us to situations where we have been able to play those games. Hopefully, we can keep that going with this one.”

When asked about his defensive contributions, the 26-year-old was quick to point some accolades at those he stands shoulder-to-shoulder with on the pitch, too. The backline saw Rezart Rama prove a force on the flanks, with ‘Mr. Toronto’ himself, Ashtone Morgan, replacing Awuah out left. While the defensive line-up shifted in terms of faces and formation, Achinioti-Jonsson remained a constant as the side wrapped the regular season with the least goals conceded out of any side.

With the 2022 CPL season either set to wrap this weekend or next for him, he’s keen to add another great memory to what has proven to a fruitful pile of them during his time in orange.

“There’s been so many,” reflects the defensive midfielder. “From the Canadian Championship Final this year where we put on an amazing performance, last year in Concacaf in our comeback against the Costa Rican team where we won three-nil at home and sealed the deal for us going to the Champions League, and winning the league two years in a row – too many too choose to from.”

While he’s keen to make a new memory by reaching a fourth-straight CPL Final for a third potential North Star Shield, whatever happens next won’t mark the end of his time in orange: having inked a multi-year deal at the start of the year, Achinioti-Jonsson will still be here for hammer come 2023.