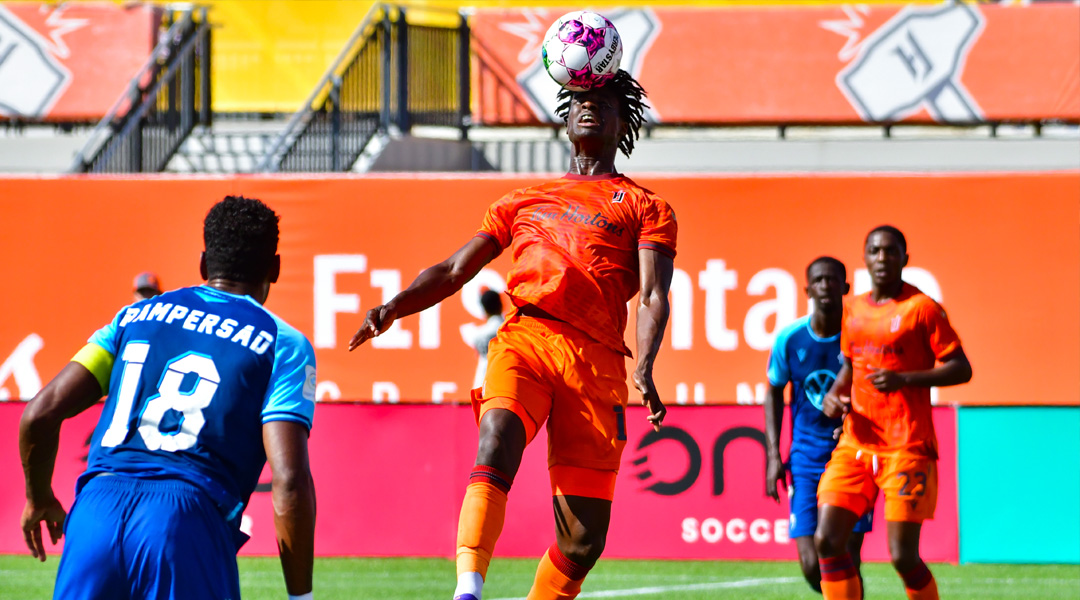 Two weeks after the latest installment of the Canadian Premier League and League1 Ontario double-header, Forge and Sigma were once again involved. The result: another win for each side one after the other.

It was not the vintage Forge team that fans have been accustomed to seeing, but the Hammers got the job done courtesy of a Woobens Pacius header less than two minutes in.

Before the game, Forge defender/midfielder Alex Achinioti-Jonsson was honoured for reaching the century mark in club appearances. That had actually been achieved last weekend in Forge’s 4-0 win in Ottawa, but the Swede got his recognition at home during the pregame ceremonies.

As for the game itself, it was Tristan Borges who won and took the first corner of the game, with the red-hot Pacius heading in the game’s only goal from six yards. It was his sixth marker in as many matches, surely turning a few heads at higher levels.

Halifax did not back down, and had several chances of their own throughout the 90 minutes. Their best chance came half an hour in. Fumpa Mwandwe found space in the six yard box but fired his effort above the bar. That was by far the best chance for the Wanderers.

The visitors ramped up the pressure in the second half in an attempt to get something from the game. They hit the crossbar with a few minutes to go, but just could not get the ball past Triston Henry. Outside of the goal, there were not a lot of shots on target in this one.

In the post game press conference both coaches pointed out the difficulty their players had adjusting to the heat in Hamilton. Water breaks were required in each half, with the late afternoon heat on a turf pitch making things challenging for both. The victory was Forge’s sixth on the spin and will ensure that the Hammers stay on top of the league table at the end of the week. It’s one win in eight for the Wanderers, who stay sixth in the rankings.

With Forge coach Bobby Smyrniotis and his brother Kosta watching on from the stands, Sigma FC found the net seven times in their 7-2 rout of Unionville Milliken.

The Mississauga-based side were good for three goals inside the opening twenty minutes to put themselves in firm control. Ten minutes before half-time, Unionville got one back to make the game a bit more interesting. By the hour mark of the game, both teams had scored once more, with Unionville still in the game and trying to make something happen. Unfortunately for them, the two goal deficit was the closest they came.

With three Sigma goals coming in the final seven minutes, they were able to ice off the game and put an end to their opponent’s attempted comeback. Sigma ended up with six different scorers on the night in collecting their fourth straight win and fifth in their last six, now eighth in the league tables.

Unfortunately for them, results did not go their way last night, and were officially eliminated from playoff contention in the league despite the win. They are still poised to end up in the top half of the table and leave themselves in good position to partake in League1 Premier come 2024.

Unionville Milliken’s setback was their 13th loss of the season, all coming within their last 15 outings. They are now in 19th place with 14 points, and are on a six-game losing slide. It will just be a matter of trying to end the season on a high for them.

There is one more League1 Ontario and Canadian Premier League double-header set to take place at Tim Hortons Field. On August 20, Forge will host York United in the third 905 Derby of the season in the CPL. Following that, Hamilton United Elite will take on Simcoe County Rovers in a League1 Ontario tilt, which will be part of the final round of the regular season. Hamilton United was also eliminated from postseason contention last night, though they could end up playing spoiler for Simcoe. At the time of writing, the Barrie club is in seventh, just a point and a place behind the playoff spots.