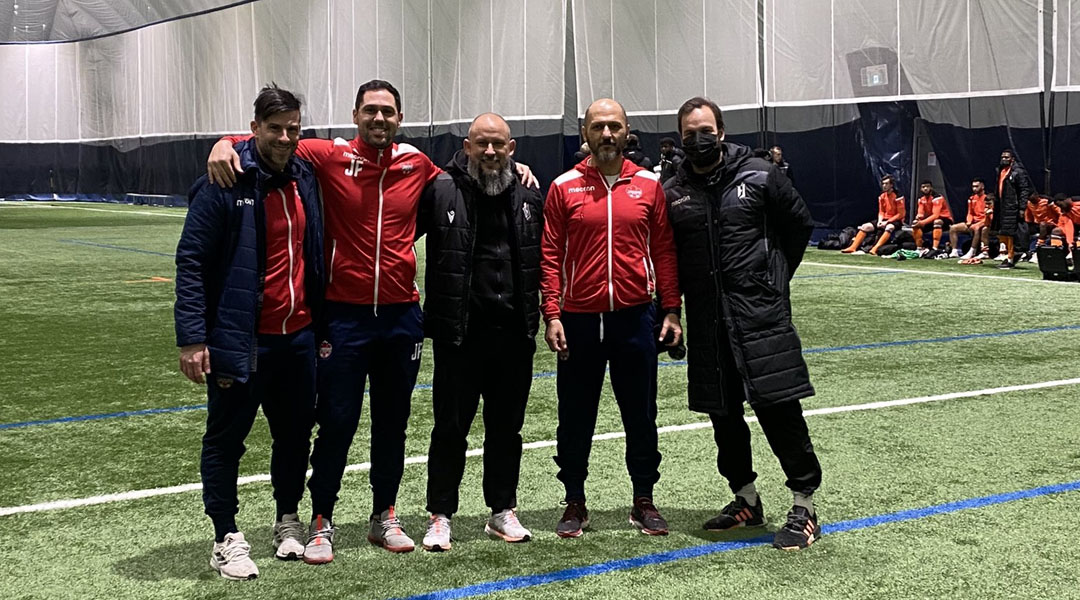 The Hamilton-based side played a full ninety minutes of action against League1 Ontario side Vaughan Azzurri, with one staff member present stating that the quality of play for the preseason friendly was “very good” for both teams.

The hammers are ramping up their preseason preparations ahead of a Champions League tie against Cruz Azul in two-and-a-half weeks, where an away trip to the fabled Estadio Azteca will mark a far cry from the soccer dome in which the current squad played in over the weekend.

Neither club released information as to the score of the match or any formations, though we’ve confirmed that both teams fielded multiple trialists throughout the match. The scrimmage saw the traditional format of two 45 minute halves.

The background of the above photo shows Emery Welshman, Woobens Pacius, Chris Nanco, and Dominic Samuel, who were all confirmed to be returning by the club this earlier month. Kyle Bekker and David Choiniere also feature, though it was known they had signed multi-year deals last season.

Also pictured behind the coaches is a player who appears to be Guillaume Pianelli, who was selected in the 2022 CPL-U SPORTS Draft. With second round draft pick Mohamed Alshakman being from Hamilton, it is expected that he was present as well.

The friendly also marked the first match overseen by Carly Shaw-Maclaren as a newly-minted FIFA referee, with Brad Doubrough and Melissa Snedden assisting.

The hammers have made big intra-league acquisitions in Alessandro Hojabrpour and Terran Campbell, though they haven’t been spotted in Hamilton as of yet – though there’d be no reason for them not to be there. It also appears that Triston Henry has re-signed with the side, as he’s featured in promotional content during training sessions at Tim Hortons Field.

The hammers have officially announced eight players for the upcoming season, but are set to undergo some changes after forward Molham Babouli departed for Qatar and Maxim Tissot joined Atletico Ottawa, with left-back Kwame Awuah still in the midst of a trial with the Vancouver Whitecaps.

While the full shape of Forge’s early preseason plans are yet to be revealed, it’s good to see that the two-time CPL winners are able to get some competitive minutes under their belt ahead of an away match against Liga MX opposition like Cruz Azul. The club will be entering as significant underdogs, but have consistently exceeded expectations in continental action.

The single preseason friendly already more of a preseason run than the club got to enjoy last year, where they even had to cede a potential Champions League berth after provincial health regulations saw them unable to begin training.