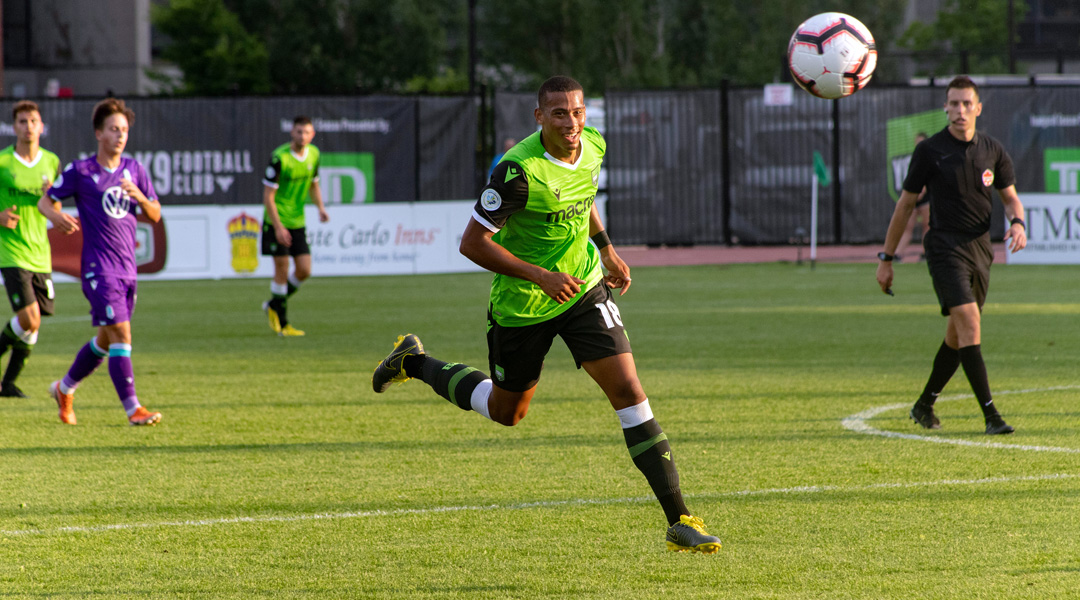 Ryan Telfer’s time at York9 FC has been good: he’s scored plenty of big goals (including the league’s first), he’s kept fit, and he’s certainly developed as a player. That’s three for three.

The 25-year-old midfielder’s efforts haven’t gone unnoticed by Toronto FC head coach Greg Vanney, who touched based with CPL Editorial contributor James Grossi regarding the good form of his loanee:

He’s developed a lot of confidence, and he knows he’s capable of not just competing, but excelling. You can see his chest is up and he’s very comfortable, and that he can make a difference. That’s part of the purpose [of this loan]: to gather that level of belief and feel that [confidence]. It’s been a great experience for him and we’ll continue to keep an eye on him.

The sentiment of Telfer’s impressive progress is echoed by the Nine Stripes coaching staff: assistant coach Carmine Isacco, who had coached Telfer throughout his time with the York Lions and ultimately swayed him to join the Nine Stripes on loan in the first place, called the 25-year-old ‘the perfect prototype of what the CPL is in development of a player’, while simultaneously stating that Toronto FC would do well to send some of its youngsters on loan to the Canadian Premier League.

Telfer’s 1,648 minutes on the pitch so far this season have seen him become a fan-favourite, and they’re also one of the reasons Telfer agreed to coming to the Canadian Premier League side in the first place:

At this point in my career, those minutes in this competitive league are very important for my development.

Telfer was briefly recalled to Toronto FC for a single game back in June, where he came on as a substitute and made a clever run to connect with a lofted pass from TFC designated player Alejandro Pozuelo. With a speedy burst of pace that came as no surprise to fans of York9 FC and TFC, Telfer made space for himself and sent in a cross for Jordan Hamilton to slot home an equalizer from.

He credited his loan to the CPL for his good performance.


Whether the loan ultimately allows Telfer to carve out game-time at the MLS level next season remains to be seen, but it’s clear that so far he’s a good success story for the league. The important thing for Telfer is that so far he’s impressed the boss at his parent club, and that’ll go a long way for his future with Toronto FC.

For the CPL, it’s doing exactly what it was put in place to do: give Canadians time on the pitch to develop in a professional environment. In that regard, Telfer isn’t the the only one to have exceeded expectations: youngsters like Tristan Borges and Terran Campbell have played well, and are almost certainly getting more playing time in the Canadian league than they would in any other professional league around the globe.