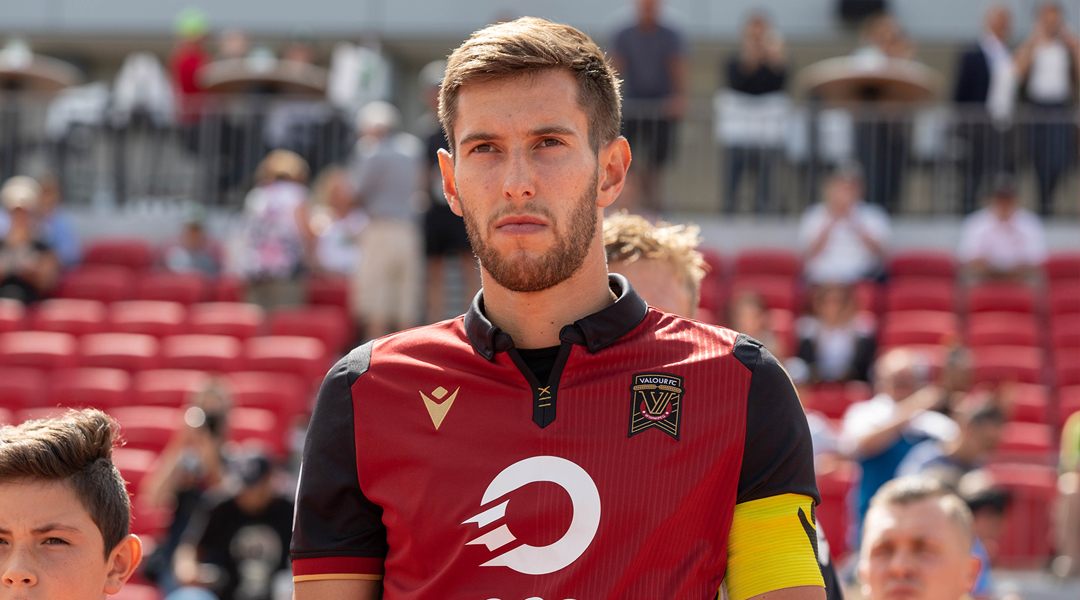 When the Halifax Wanderers made just the second-ever CPL intra-league transfer to get Louis Beland-Goyette, head coach Stephen Hart knew he was getting a midfielder who wasn’t afraid to lead in the locker room.

In a league filled with plenty of brand new professionals, that’s a character trait that some would likely describe as priceless. Hart himself had lamented some of the difficulties that members of his inaugural roster had in regards to the 2019 season, which saw the Wanderers endure a congested fixture schedule, plenty of injuries, fatigue, and some of the longest away days in the entire world.


As the Halifax Wanderers eventually plummeted to a last-placed finish in the fall, Beland-Goyette – then at Valour FC – was tasked to wear the armband over in Winnipeg after injuries and dramatic suspensions forced changes in the locker room. His impressive inaugural season campaign with Valour FC was cut short after picking up a knock in the fall season against York9 FC, with the midfielder now stating he’s fully recovered and ready to get work done on the east coast.

When asked if he’d be comfortable wearing the armband if asked, Beland-Goyette expressed that he is quite willing to establish himself as a leadership figure at Wanderers Grounds. If any of the new professionals in the club’s ever-growing roster are in need of help or advice, he’ll be there.

It’s never something I look to do or to have, the captain’s armband, it’s just part of my job and who I am, and maybe my winning mentality to try to be a leader on the team. I have a little bit of experience, so hopefully I can help their players that don’t have that experience or that are looking to get that experience. It’ll be important for me to just try to help and make the team go forward, so if I can do it by leadership than I will, and it’ll come naturally for me. It’s never forced out of me.

For the Wanderers’ debut season, the club announced three captains: Jan-Michael Williams, Elton John, and Chakib Hocine. The latter two were released by the club, while Williams has returned in a staffing role as the new goalkeeper coach. The club has a vacant captaincy, it seems, and Beland-Goyette may just fit the bill – though it remains to be seen who else will arrive to the club this year and who else may step up in that regard, too.


When Beland-Goyette first put on the armband for Valour FC, the experience was a first for him: the then 23-year-old was used to being one of the lesser-experienced players at his former clubs. In Winnipeg, he was tasked with leading the club on the pitch and in the locker room. It was somewhat of a culture shock, but it made the Pointe-Claire-born player mature quickly as he adapted to his new responsibilities.

It made me mature a lot, because it was very different in the locker room where guys don’t know how to react to certain situations. For example, sometimes in Valour it was getting rough because we were losing a lot, and that’s when it was very different for me, and that’s when I needed to step up because I had been in situations like that compared to a lot of other players on the team that didn’t, so I think it came naturally for me because of what I had experienced before. That was the main difference, having other players that had never played professionally before and had never been in an environment where winning is the most important thing and you don’t care about anything else, it’s about winning. That was a bit different, but I think it made me mature a lot in that one year.

Whatever happens, Louis is eager to bring success to the Wanderers in 2020. He’s set a lofty goal for himself: win the championship. By that he means the combined league table rather than the two-legged play-off. The Finals count for less, he says, because topping the cumulative league table is a harder, long-term goal.

Of course, winning the North Star Shield would be nice too, he says with a chuckle.

Captain or not, he’s got drive, and the former Montreal Impact man has impressed at the CPL level so far from his time with Valour FC. It’ll be exciting to see what he can produce for his new home on the east coast, which has now signed no less than five brand new players amidst a significant squad overhaul. Beland-Goyette suggests that a change in power dynamics between CPL clubs may be in the mix for 2020, and that’s exactly what coach Hart will be hoping for: less draws, more wins, and a rise up the league table.

The Halifax Wanderers did not disclose Beland-Goyette’s financial compensation or the length of his contract.