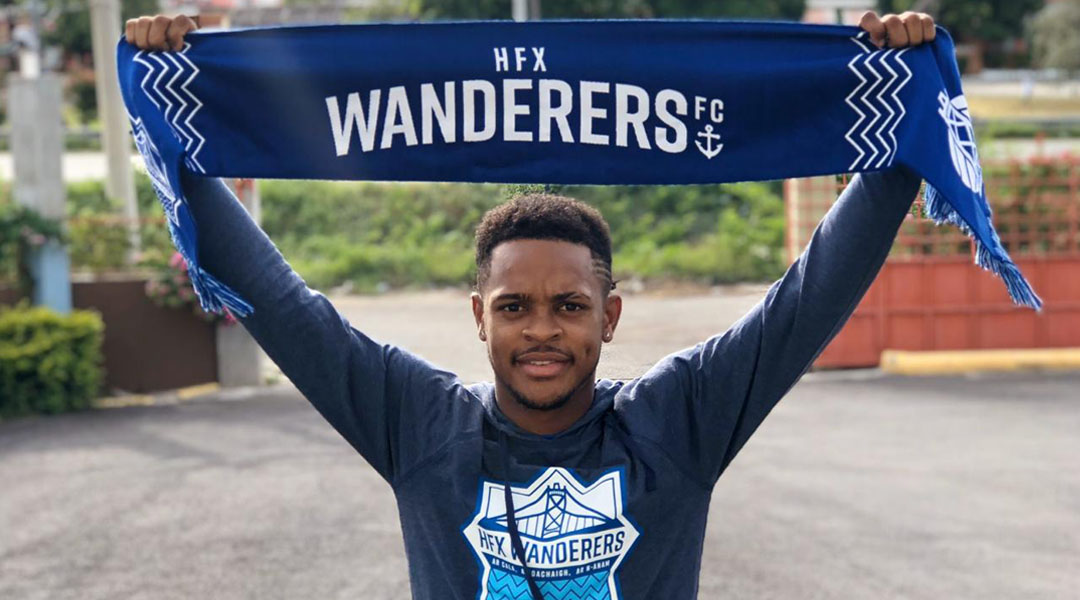 With the pandemic preventing many international players from entering the country – and clubs like York9 FC already opting to part ways with three of them – one could be forgiven for having assumed Marshall wouldn’t be where he is today.

If you’d asked Marshall if he thought this moment would come even just one week ago, you might have received a similar answer: things were finally looking good when his lawyer told him his travel documents were finally ready for pickup, but upon arriving at the office they didn’t end up being there. In that moment, he says, he was truly wondering if he was going to go. Thankfully, the misplaced documents ended up just being a slight blip in the bureaucratic system of pandemic-era travelling.

Marshall had consistently kept his cool about the situation ever since the COVID-19 pandemic forced the delay of the season itself, and was simply relieved to see things work out this week. He was able to eventually secure his documents and, after months of uncertainty, board a long-awaited flight to Halifax.

Arriving with a few balls, two resistance bands, and a lot of time, Marshall is now self-isolating ahead of the 2020 Canadian Premier League season. He kept fit in Jamaica by way of running on beaches, but there’s no opportunity for similar luxuries as he awaits permission to train with the Halifax Wanderers squad for the first time. Given the circumstances, Marshall recognizes that he’s got a lot of work to do in order to catch up to where the rest of the squad is at.

They’re all good players. It’s going to be a challenge, I’m going to work my way in. I think I’m going to play catch-up, because I think everybody is probably ahead of me in terms of preseason and being prepared for the tournament. I like the challenge. I’m just going to go and work hard, and hopefully I’ll play as much as possible.

Where Marshall will fit into the squad is still anyone’s guess: he’s a winger that can play on either side of the pitch, with head coach Stephen Hart having previously stated that he could fit into a number ten role, or even find himself up top as a striker. Marshall says he certainly isn’t a ‘one position’ type of player, even jesting that he’s happy to play as goalkeeper if that’s where Hart wants him.

Hart had previously stated that they needed to wait until Marshall was training with the other players to find out where he best fit in with the team, but in the present circumstances that won’t leave them with a lot of time to figure things out. That’s life, summarized the international signing, who felt there was no point in getting frustrated.


As things stand, Marshall will only have a matter of days to train with the squad in PEI before The Island Games kick off, though the date of the first Wanderers fixture – or the season in full – is still yet to be revealed. Marshall seems to indicate that teams won’t have too much time to rest in between games, which is something that members from the league’s inaugural season are likely well-accustomed to already.

Honestly, the only problem – it’s not really a big problem because life comes with challenges – is just that I wish I had more time to train with the team before such a big tournament. This is going to be a very difficult one, because as you know it’s going to be in one destination, one place, and the games are going to be very close. When games are that close there’s going to be a lot of fatigue. But, that’s life.

The 22-year-old isn’t the only Red Stripe Premier League player to have signed with a CPL side for the 2020 campaign, either: his former Cavalier SC teammate, Nicholas Hamilton, remains stuck outside of Canada for the time being. Marshall says the duo still talk everyday, and he’s praying that Hamilton will be able to participate in The Island Games as well.


With York9 FC quiet regarding his potential arrival, things look less likely for Hamilton. Similarly, the status of Marshall’s Brazilian teammate Eriks Santos – who coach Hart described as a catalyst to build the Wanderers roster around – is still unknown.

Alex’s capture of an overseas opportunity was something that came years in the making: Marshall had participated in two overseas trials before, but found lasting opportunities hard to come by. Being scouted by the CPL’s centralized scouting system this year, though, brought interest from more than one CPL side. It didn’t take long after that for The Wanderers to secure his signature.

When I found out that I was going to Halifax, I didn’t have any words to say to my coach and my agent, I didn’t know what to say. As you know, I’d been waiting for a while to be go overseas. To get this opportunity is something amazing, and words couldn’t explain how I felt.

Having made ten appearances for the Jamaican national team, Marshall finds the CPL to be a good league for his continued development. While the likes of Amer Didic, Marco Carducci, and Tristan Borges made Canadian headlines by earning national call ups due to their CPL play last year, Les Rouges weren’t the only national team watching the league: both Ryan Telfer and Akeem Garcia made appearances for Trinidad and Tobago, while Emilio Estevez made his debut for Taiwan before being sold to Dutch Eredivisie side ADO Den Haag.

With just under two weeks ago to go until The Island Games kick off, Marshall is eager to do his best in the bubble tournament and begin his Halifax Wanderers career on a high note. Arriving on a multi-year deal, head coach Stephen Hart has made it no secret that he has big plans for the young Jamaican international.


To that end, Hart has completed a significant roster overhaul on the Halifax Wanderers side that finished last in the fall season of 2019. Marshall is joined by new internationals Joao Morelli, Jems Geffrard, and top draft pick Cory Bent, with the club also bringing in high-pedigree domestic signings like Louis Beland-Goyette, Daniel Kinumbe, and Jason Beaulieu.

As things stand, fans won’t have to wait too long in order to see how the club’s thirteen brand new player signings gel together. Whatever happens, it’ll be good to see Alex Marshall finally suiting up for his side nearly half a year after his transfer was made official.