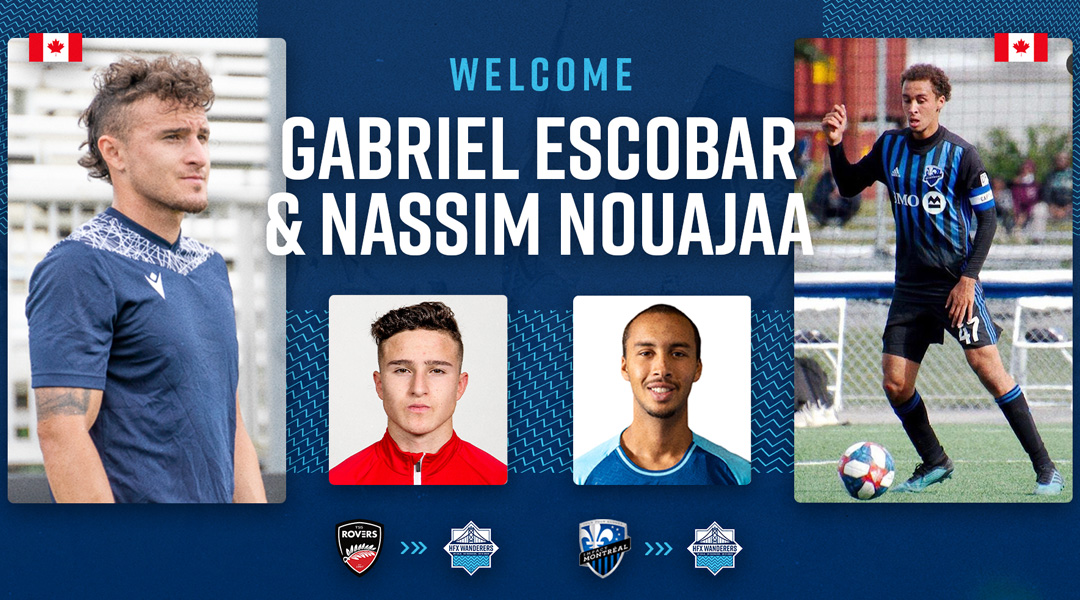 Just hours after confirming the departure of two defenders, the Halifax Wanderers have revealed both of their replacements.

Today saw the east coast side confirm the arrival of Canadian-Salvadoran left-back Gabriel Escobar and former CF Montreal Academy centre-back Nassim Nouajaa, with the former arriving on a full contract with club options and the latter arriving on a developmental deal that, if all goes to plan, will be extended into a full contract.

The 22-year-old Escobar will be a familiar name to League1 BC fans, with the left-back having helped the TSS Rovers take the league’s inaugural championship as a five-time Team Of The Week athlete.

“Gabe comes into the group sharp from a strong season and with valuable youth national team experience under his belt,” revealed sporting director Matt Fegan. “He is tenacious with an excellent mentality that will be important as we compete for the playoffs the rest of this season. He also enjoys getting forward, an attribute we like in our full-backs.”

Like many west coast-based athletes in the league, Escobar is a product of the Vancouver Whitecaps Academy. The dual-national had also featured in Canadian youth national team camps from the U-15 to U-17 level, finishing rupper up for the Canadian U-17 award in 2016 bethind Alphonso Davies and Jonathan David.

Escobar then transition to the El Salvador U-20 national youth team for the 2018 Concacaf U-20 Championship, but – like former Eddies forward Marcus Velado-Tsegaye – still awaits a call-up to the senior level. All-told, he looks like an intriguing pickup who could prove to be Fernandez-esque surprise.

The Wanderers also brought in 18-year-old defender Nassim Nouajaa, who has Canadian and Tunisian roots. He comes in as the second midseason reinforcement from La Belle province, with Halifax recently adding PLSQ striker Ludwig Kodjo Amla to the ranks.

Nassim developed with amateur side Caravelles de Sainte-Foy-Sillery and participated in a U-15 national team talent identification camp alongside the likes of Jahkeele Marshall-Rutty, Matteo Campagna, and Dino Bontis en route to joining the MLS Academy side, though he’d largely dropped off the radar in the time since.

The young defender returns to Canada after exploring some footballing opportunities in Tunisia and cracking the U-20 squad for the country’s 2023 Africa U-20 Cup of Nations qualifiers.

“We’re happy to welcome a player of Nassim’s potential to our club,” added Fegan. “He is still only 18 but is composed on the ball and has strong leadership qualities we admire as well as a versatility to play at the back or in a holding midfield position. We expect him to compete immediately for first-team opportunities.”

For now, the defender arrives on a developmental contract that includes the option to extend it another a full deal. As per the league’s roster rules, Nouajaa will be eligible to play three matches before the club makes a decision on him – in short, it’s a great way to trial him at the pro level.

He isn’t the only defender on a developmental deal fighting for an opportunity, with Nicolas Gagan still awaiting a chance to break through. For now, however, it’s the two new signings who are more likely to crack the matchday roster against Atletico Ottawa this week.

There have been a number of CF Montreal youth prospects to break through at the CPL level ahead of Nassim, including red-hot Forge striker Woobens Pacius and new Pacific FC midfielder Cedric Toussaint. Nouajaa had played alongside Cavalry loanee Jean-Aniel Assi at the youth level, though his stock never rose quite as high.

The Halifax Wanderers host a hearty contingent of players from La Belle province already in the mix, with Jeremy Gagnon-Lapare, Pierre Lamothe, and Samuel Salter already well-seasoned out east, while Zachary Fernandez has certainly made waves this year.

The Halifax Wanderers have conceded more goals than any other team barring FC Edmonton, dropping 1.5 goals per game. With Mateo Restrepo having left to pursue a medical career and two U SPORTS defenders having just left, the duo’s arrival comes at a time when a defensive shake-up looks needed.