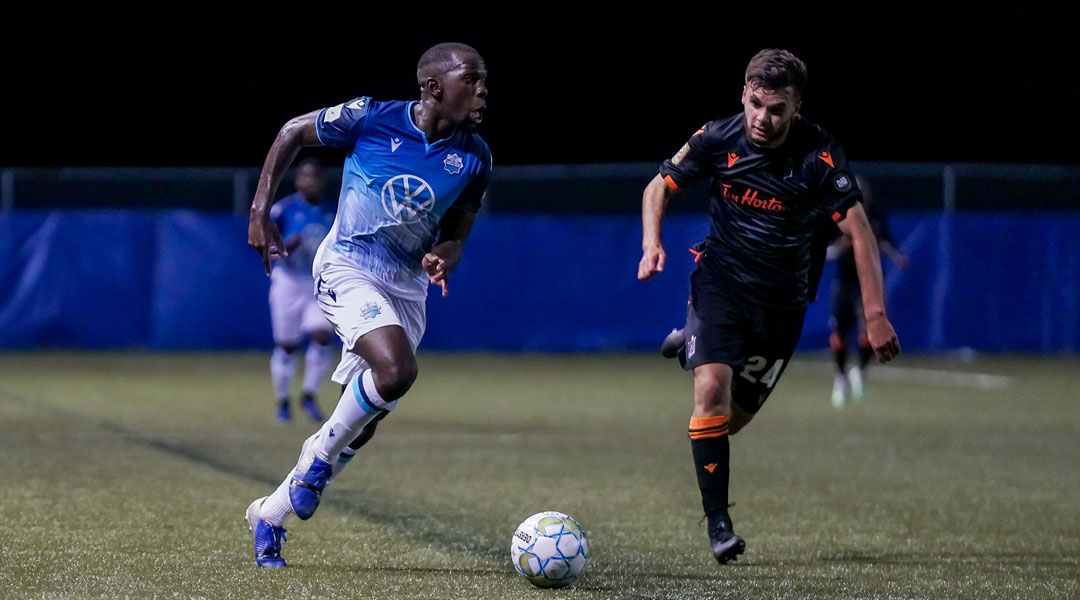 Canadian Premier League favourites Forge FC were held to their second draw at The Island Games following a resurgent second half from Stephen Hart’s Halifax Wanderers.

Stephen Hart rotated his own front three, with Cory Bent pushed out right, Akeem Garcia starting up top after having impressed as a substitute in the side’s season opener, and former Montreal Impact midfielder Daniel Kinumbe making his debut on the left.

After a few minutes of back and forth action, an out-of-the-blue foul by goalkeeper Jason Beaulieu saw referee David Barrie immediately point to the penalty spot. Belgian midfielder Paolo Sabak stepped up, firing home a tidy penalty to give Forge FC the early lead.

As CanPL Editorial staff member Marty Thompson pointed out, all seven penalties in the league play this season have resulted in a goal – though Beaulieu can at least take some solace in the fact that he did dive the right way.

The hammers nearly doubled their lead from a corner in the fortieth minute when the ball found its way across the net to Marcel Zajac, but Beaulieu was able to sprint across goal to quickly block the shot. Moments later, Kadell Thomas would find himself in space, but a repeat wonder goal wasn’t to be as he was quickly closed down by the six-foot-two goalkeeper.

The second half saw Stephen Hart bring on Jamaican international Alex Marshall, who was able to enter Canada and quarantine shortly before the Island Games kicked off.

The Wanderers got off to a flying start in the second half, with Trinidad and Tobago international Akeem Garcia equalizing for his side just two minutes into the restart, nutmegging Triston Henry after a beautiful lead ball from Marshall.

Paolo Sabak should have equalized for Forge FC in the 52nd minute, having found himself free in the middle of the box but skying a shot taken from just beside the penalty spot. Thus far, no player has scored a brace at The Island Games.

There was almost some late game drama as Alex Marshall neatly collected the ball at the edge of the Forge FC box, switched his feet and firing a shot that flew just over the net. Moments earlier, big man Ibrahima Sanoh had fired a shot just wide of Triston Henry, too.

Maxim Tissot fired a rocket of a freekick from well outside the box in added time, with the effort curling just outside the goalpost. Three days ago, the left-back’s dangerous set piece resulted in a goal when it went off the head of Eddies man Kareem Moses.


With both sides unable to score a second goal, the two sides shared a point each as the final whistle sounded. Forge FC sit at the top of the table with five points after three games played, while Pacific FC rest in sixth place with two points from just as many games.

Forge FC will jump to west coast opposition this weekend, with Bobby Smyrniotis set to take on Pacific FC this Saturday. The game will be available live on OneSoccer and CBC Sports, with the league now also being picked up by Indian channel 1Sports.

Stephen Hart’s side will have an extra day of rest before taking on similarly tough competition in Cavalry FC, with the match available live on OneSoccer and CHCH TV for Canadian consumers.