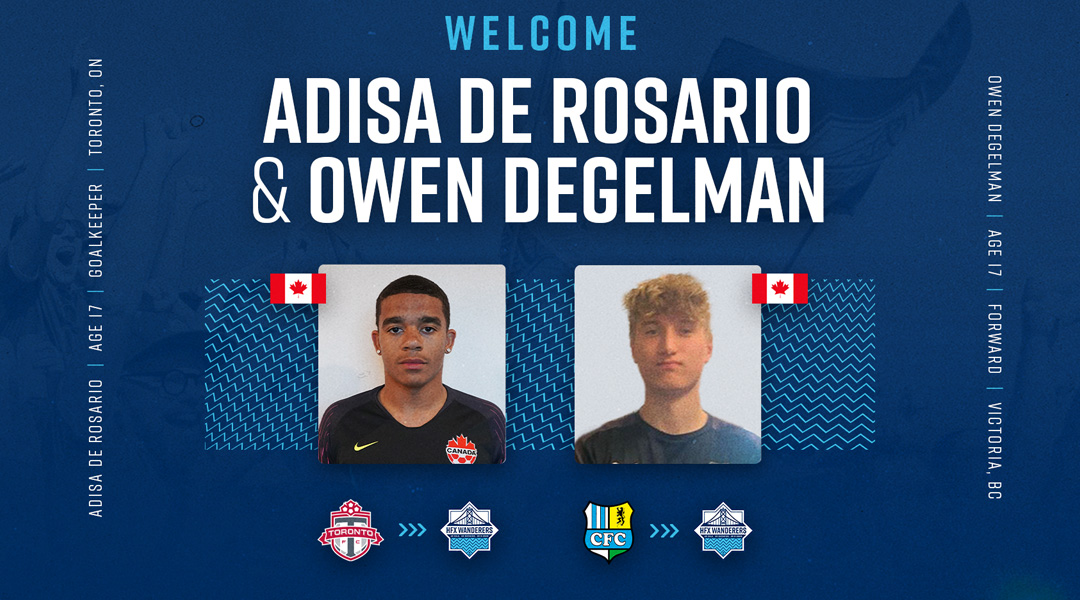 Fresh off of two young defensive recruitments, the Halifax Wanderers have added two more teenagers on developmental deals as the club approaches its final eight matches of the regular season.

Today saw the Wanderers add 17-year-old duo of goalkeeper Adisa De Rosario and forward Owen Degelman, who aim to contribute on opposite ends of the pitch.

The addition of a third-string goalkeeper may raise some eyebrows, especially with it coming not long after Keiran Baskett missed a match through club discipline. With Oxner and Baskett both on club options next year, the message is clear: it’s performance time.

The young De Rosario arrives to Halifax from the Toronto FC Academy, having also integrated himeslf with Toronto FC II this year. He’d also received a call-up for the Canada U-20 camp ahead of the Concacaf U-20 Championship, too.

“We’re pleased to welcome Adisa into our squad and see how he can challenge himself further in a professional environment,” stated Wanderers sporting director Matt Fegan, with the youngster now set to develop under the tutelage of Jan-Michael Williams.

17-year-old forward Owen Degelman arrives with some international experience after spending the previous season with Bundesliga side Chemnitzer FC, where the sizable six-foot-two youngster featured for the U-17 team.

Degelman tallied five goals an two assists in eight matches, with interest from the first team stalled due to the inability to sign a foreign national under the age of 18 in Germany. Their loss, it seems, is Halifax’s gain.

“Owen now has a chance to come into our squad as a development player and benefit from being in a professional environment,” added Fegan. “As with any young player, it’s important they show the right mentality to want to learn and soak up the experience and ultimately earn some first-team minutes.”

Fans shouldn’t expect the tall forward to stay out east after this season, however, with the Wanderers reporting that there are plans for him to return in Germany in the off-season. He’d also featured in the Vancouver Isle Wave program, too.

“He arrives with an excellent reference from his coaches at Chemnitzer, and we’re working on plans for him to return to Germany in the off-season. We must always keep an eye on the future and how we can help young Canadian players develop and prepare themselves for the next level.”

The club has confirmed that both youngsters are due to arrive out east this week and will immediately join the squad for training.