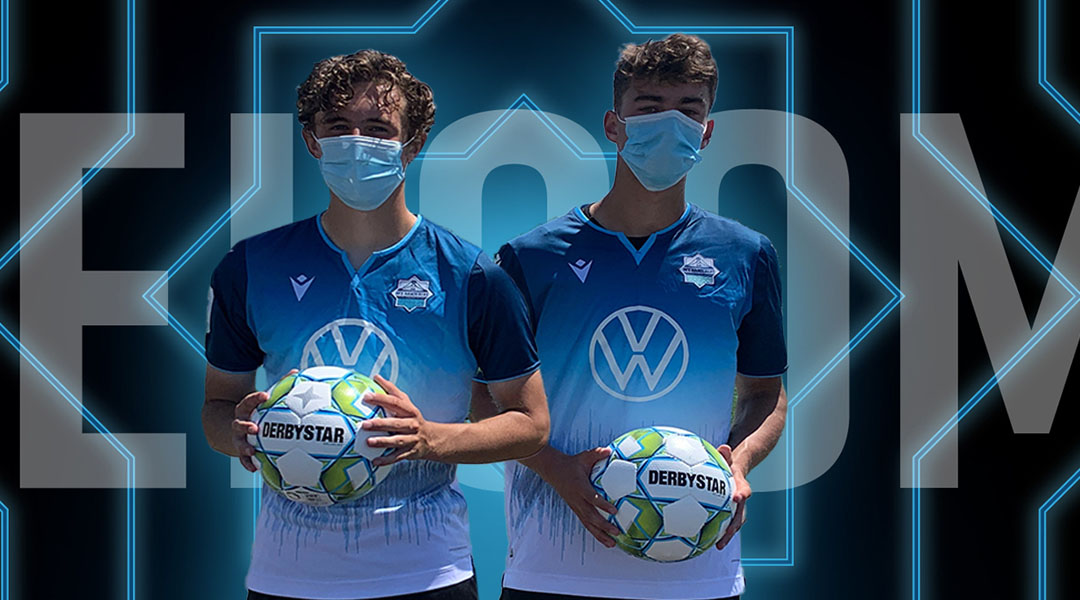 While the Halifax Wanderers had previously called their roster complete, the side has now added two young Canadians in CPL-U SPORTS Draft Pick Jake Ruby and Halifax-born Luke Green, who joins on a developmental contract.

The two defensive-minded signings arrive as depth options for Hart’s backline, with Ruby filling in at right-back and Green at centre-back.

Jake has very strong defensive qualities and he reads the game well and Luke has trained with us since last year and is very calm and measured which are good qualities as a centre-back.

Former Vancouver Whitecaps Academy product Jake Ruby first arrived on Hart’s radar after impressing during his time at Trinity Western University. The former FC Nurnberg trialist had been training with the Wanderers for some time prior to the invitation to officially join, too.

It’s been amazing training with this team and I’m super happy and motivated that there is going to be a league. The club gave me the option to go back home because of COVID-19 but I decided the best move was for me to stay here and show my commitment to the club and that was the right decision in the end.

Green, meanwhile, had actually been a regular fan in attendance during the team’s inaugural campaign last year. He had previously played with local side Suburban, where he credits Wanderers assistant coach Mesut Mert for helping him progress. He had trained with the club a few times back then, too.

Mesut made me into the player I am. Just his style of play, he loves technical players and he made me try to play quick and was all about the passing type of game. It’s a dream come true because to watch the team in the first year and to be from the city is unreal, so for me to have this chance to play pro in Halifax means everything

The news come as the Halifax Wanderers confirmed that Eriks Santos, who is still unable to enter Canada, is part of the club’s long term plans: if he isn’t able to arrive this year, Stephen Hart still plans to included him as part of his side’s 2021 roster.

Jamaican international Alex Marshall arrived to Canada earlier this week, and described his current time in self-isolation with us. Similarly, goalkeeper coach Jan-Michael Williams was able able to return to the province.

Stephen Hart’s latest signings provide depth for a club which looks much-improved from last year on paper: with higher-profile players like Louis Beland-Goyette, Alessandro Riggi, and Joao Morelli all complimenting several other signings, it’ll be interesting to see how Hart’s side fares for the 2020 Canadian Premier League season.

The Island Games are poised to kick off on August 13, with the Halifax Wanderers playing seven games across the shortened regular season. If the side can secure itself a top four spot, the club will progress into a second round robin playoff ahead of a potential CPL Final appearance.

Given that both of today’s new signings arrive on a U SPORTS and Developmental Contract respectively, the presumed contract length is solely for the run of the season with a minimal cap impact – if any – for the club.