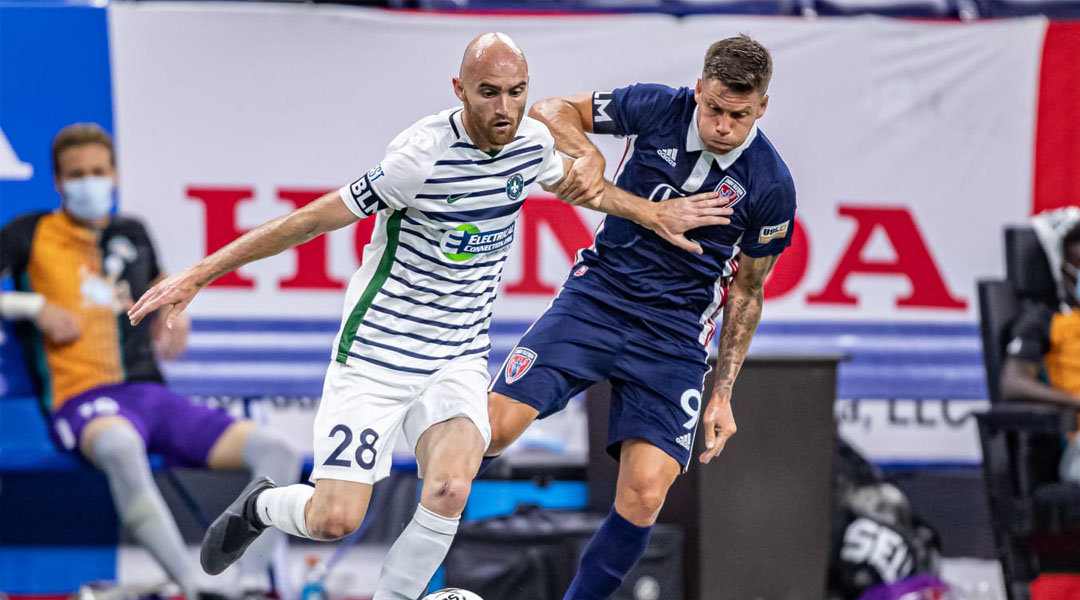 Jeremy Gagnon-Lapare was revealed as the newest Halifax Wanderers signing earlier this afternoon, with the versatile 25-year-old arriving to Wanderers Grounds ready to prove his worth in a midfield role.

He credits the transfer coming together in large part to Stephen Hart, who wasted little time in reaching out to the former Saint Louis City man following the club’s final USL season. The early interest led Gagnon-Lapare to reach out to former Montreal teammates Alessandro Riggi and Jems Geffrard, who both had plenty of positives to say about the east coast club.

Gagnon-Lapare then had a more in-depth chat with Stephen Hart, who was interested in bringing om the versatile athlete for a midfield-focused role. Things came together fairly quickly after that.

The 25-year old arrives after seeing his previous two clubs both fold, with the Ottawa Fury dissipating after a sanctioning row, and Saint Louis City folding due to the financial impact of COVID-19.

Calmly calling those past two events ‘a little bit unfortunate’, Gagnon-Lapare is hoping for more stability with his return to Canada, noting that a two year contract offer from the Wanderers which included an option for a third season was a big draw for him:

I’m hoping I can find some ground where I can establish myself and establish some consistency, and hopefully stay there for a bit longer than the two previous clubs I was at! I’m definitely hoping that Halifax can be a longer stint.

One of the net positives he took away from being one of the new guys for two years in a row is that he’s now much more comfortable jumping into a new environment, stating that he’s ready to express himself in the Wanderers camp and help lead some of the club’s greener professionals by example:

I set the bar pretty high for myself, and that’s something that I want to see in everyone I’m working with in a group. I’ll do everything I can to push everyone forward in the right direction, and whatever the coach wants me to do I’ll be ready to do it.

Of course, Jeremy hasn’t just played with a few of the Wanderers like Riggi and Geffrard in the past: he’s played against some of them, too. In 2019, the then-Ottawa Fury man appeared against the side for two legs in the Canadian Championship, where he was deployed as a centre forward with an aim to put one beyond Christian Oxner.

The home-and-away leg affair ended in the Fury’s favour with a tight 5-4 aggregate scoreline. While Gagnon-Lapare didn’t find the net against his new team, he recalls being impressed by the east coast side’s home support and the quality of their inaugural roster in general:

I was actually surprised by the level they had, and they put us under real pressure. I remember the second leg of the cup, we were trailing at one point two goals on the aggregate. It just shows how quickly the CPL was able to acquire a high level through some good coaches and good players. When we played in Halifax, I remember the crowd being close to the best we’ve had that season in the USL. It shows just how well the CPL has developed over a short period of time.

Having now signed on for the team ahead of its third-ever season, he notes that another big attraction for him was the fact that the club re-signed most of its core players. He likes the stability this presents, especially after liking what he saw of the club’s attacking prowess at The Island Games.

Head Coach Stephen Hart can take a lot of credit for instigating a massive club rebuild following the club’s last-placed finish in 2019, with the 2020 Wanderers squad making it all the way to the CPL Finals. His quickness to reach out to players has also seen some astute pick-ups like former York United full-back Morey Doner.

With over 100 professional appearances to his name, Gagnon-Lapare now arrives to Wanderers Grounds as a proven domestic talent in midfield who can be deployed all over the pitch if needed. It also gives the club a solid midfield option should Aboubacar Sissoko not re-sign with the team.

While his 2020 season was cut short following a fractured facial bone and a concussion, Gagnon-Lapare states that he was fully fit at the tail end of last year’s USL season. He’s currently back in Montreal, training hard in the offseason before his scheduled flight to Halifax in March.

It’ll be one of the longest offseasons of the former CF Montreal’s career, which has been spent largely in North America at the USL level beyond a short stint in France.

He’s proven capable of playing all over the pitch in that time, and while he’s willing to play wherever Hart needs him to, the expectation is consistent minutes in midfield.

It’s also been some time since the Quebec-born midfielder featured in the national team, with his five senior caps for Les Rouges coming back in his CF Montreal days, the last of which came in a friendly against Colombia in 2014.

To that end, joining CPLers like Amer Didic and Marco Bustos in a national team camp isn’t something he’s focused on right now:

The national team is always something that is on the back of everyone’s mind, but it’s really a consequence of a great showing and good playing at the club level. That’s how it’s going to happen for anyone, so it’s not something that I focus on. My focus is really on helping the team and trying to get to know the players and the coach first so I can perform well on the field. Whatever good will come out of this, then maybe it’s a possibility.

If the Quebec-born midfielder can find the stability he’s looking for, the Halifax Wanderers have made a solid pickup for its midfield engine as the club seeks to repeat its strong Island Games performance – a feat that’s certainly easier said than done.

The club’s fifteenth signing of the 2021 Canadian Premier League season will be headed to Nova Scotia in March, a few months ahead of the league’s tentative start date in late May. The club has announced a new player signing every Wednesday of the month so far, having already unveiled Morey Doner and Kieran Baskett earlier this month.

Gagnon-Lapare arrives on a two-year deal with an option for 2023. The financial details of his contract were not disclosed by the Halifax Wanderers.