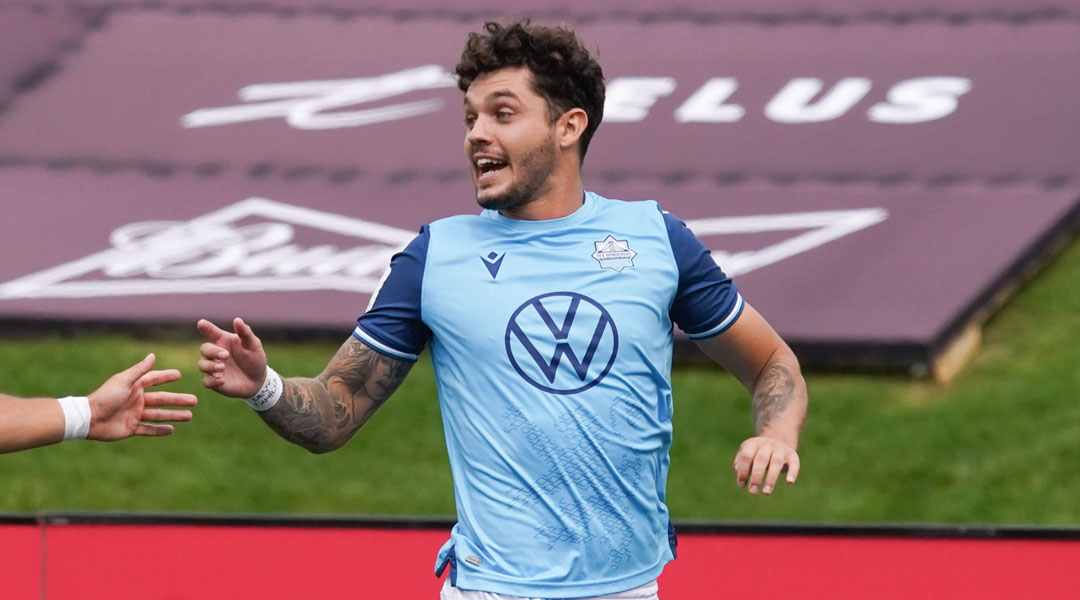 Morelli now has five braces this season (six overall), which is a league record. Five of his eleven goals came from the penalty spot, with the rest coming as a mix of left and right footed efforts from open play and set pieces.

The 25-year-old attacking midfielder hadn’t taken long to make an impact when he first arrived last season, recording four goals and providing one assist at The Island Games. The club moved swiftly to activate the first of two one-year contract extensions ahead of this season, meaning Morelli is likely to stay for longer yet.

Pacific FC forward Terran Campbell became the first in league history to hit the ten goal marker during the inaugural campaign, doing so in twenty league appearances. Forge’s Tristan Borges would hit the marker later on that month, going on to win the golden boot with 13 goals. Behind him were Campbell and Malonga (11), and all-time CPL goalscoring leader Easton Ongaro (10).

That makes Morelli the fifth Canadian Premier League athlete to hit the milestone.

The Brazilian’s most recent brace has also given him a four goal cushion in the golden boot race, with Atletico Ottawa’s Malcom Shaw rising to second place with seven after having equalized from Morelli’s first goal. Behind them is a three-way tie for third, with Terran Campbell, Alejandro Diaz, and Easton Ongaro all on six apiece.

Overall, the Brazilian has scored six against Atletico Ottawa, four against FC Edmonton, three against York United, and a single goal against Cavalry and Pacific. He has yet to score against Valour and Forge.

With fifteen all-time league goals to his name and a track record of one goal per 96 minutes this season, he’s looking likely to break the single season goalscoring record and potentially challenge for the all-time goalscoring record, too.

Morelli also bagged a goal against AS Blainville in the Canadian Championship, though that won’t count towards the league’s golden boot tally.

Last night’s brace from Morelli drove the Wanderers up to 21 points, with a playoff position now within one win’s reach for the east coast side. They’ll be hoping Morelli – who has scored just over half of the team’s goals this season – will stay healthy as the 2020 CPL runners-up begin a big push for a postseason berth.