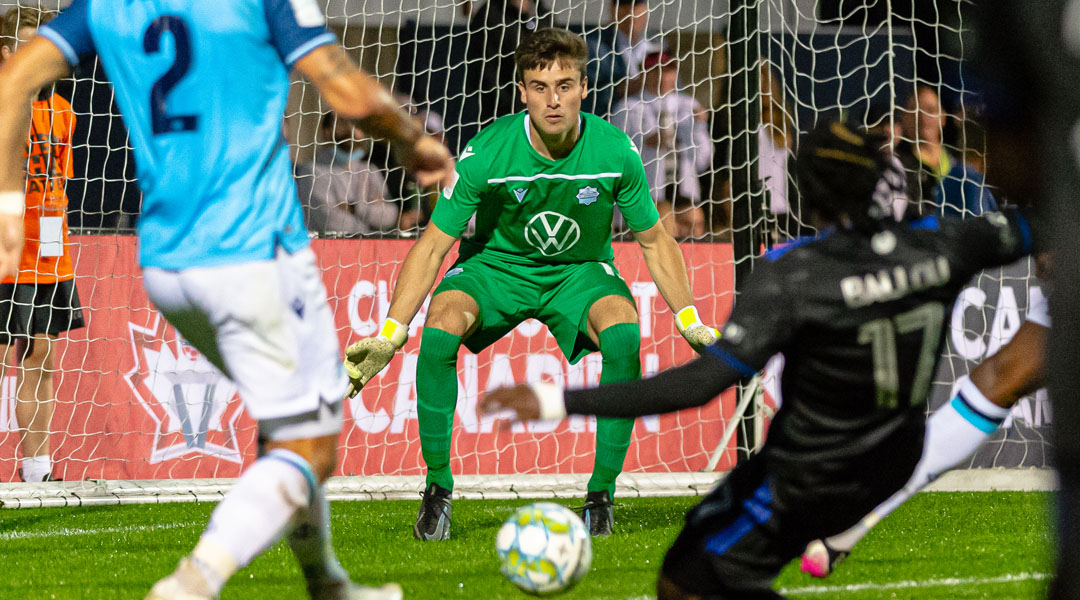 After Haligonian goakeeper Keiran Baskett carved out a starting position for himself in his debut campaign with the Halifax Wanderers, it should come as no surprise that the 20-year-old has now signed a contract extension with the team.

Today, the east coast CPL side has announced that Baskett has inked a new contract for the 2022 CPL season that includes a club option for 2023. It was also announced that the 20-year-old will spend his offseason training with Championship side Coventry City.

The six-foot-four goalkeeper made twelve appearances for the Wanderers this year, making his debut against AS Blainville in August before usurping the starting spot from Christian Oxner the following month.

Related: Baskett Reflects On Journey To Hometown Club, ‘Nowhere I’d Rather Be’

He would go on to make four clean sheets throughout the rest of the campaign, featuring against CF Montreal and procuring a highlight-reel penalty save against Cavalry FC’s Joe Mason during the club’s playoff push.

While the Wanderers ultimately let its postseason position slip, the 20-year-old has left a positive impression that now sees him set to return as the expected starter next season, where he is expected to contest against likely returnee Christian Oxner.

Sporting Director Matt Fegan was hopeful that Baskett’s contributions to the club could be long-term:

In his first professional season, Kieran showed he has all the attributes to go on and become a
top class goalkeeper. He has benefited from quality local coaching growing up and now working under our Keeper Coach Jan-Michael Williams, Kieran has gone from strength-to-strength. We’re pleased he will continue his development here for years to come.

When asked about his upcoming offseason training stint with Coventry City, Baskett described the opportunity to play in England as a dream come true: “I just want to learn as much as I can while I’m here,” he said, “and get the most out of the experience.”

It’s also worth noting that the 20-year-old goalkeeper reportedly turned down a training opportunity with an MLS side in favour of going abroad for the offseason.

It’s an absolute honour to get extended and I’m looking forward to the upcoming season and
hopefully more. It means the world to me and it’s so perfect that it’s in my own backyard.

The Haligonian becomes the second player to extend his stay with the Wanderers this offseason, with 2021 CPL MVP Joao Morelli recently inking a two-year deal of his own.

Baskett’s new deal with the club is structured as a one-year deal with an option for a further season.