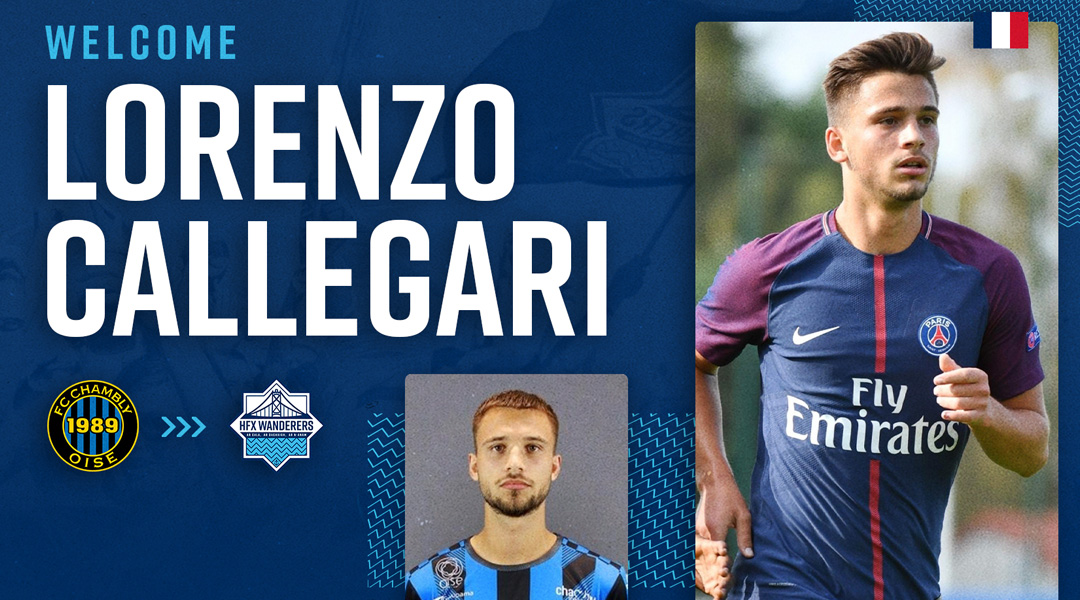 The Halifax Wanderers have announced the capture of French midfielder Lorenzo Callegari, who arrives on a one-year deal with an option for 2024.

The 24-year-old most recently played for FC Chambly, who recently dropped down to the fourth tier of French football – though Callegari comes from prestigious roots after progressing through the Paris Saint-German academy to feature for the first team.

“We’re happy to welcome Lorenzo to Halifax and delighted he chose to take the next steps in his career with us,” stated Wanderers Sporting Director Matt Fegan. “In our discussions, he has been thorough in his assessment of everything we’re doing in Halifax. He has shown a great appetite to contribute to our project, and he will add some experience and forward-playing creativity to the base of our midfield.”

The holding midfielder made his professional debut with the Paris Saint-German first team in 2016, making 43 appearances for the reserves during his time in the French capital.

He then plied his trade with Serie A side Genoa before returning to France with US Avranches, eventually signing with FC Chambly before his move to Canada’s east coast.

He’s also featured for France through to the U-20 level, making 18 youth appearances in all. He helped the youth national team to a U-17 European Championship and featured for them earlier at the 2015 FIFA U-17 World Cup in Chile.

All-told, Halifax’s capture of the former PSG midfielder looks like a well-placed gamble: he’s got an incredibly high ceiling if he settles in well, with a club option to boot.

Wanderers head coach Patrice Gheisar states that the club’s newest signing has plenty of high-level experience despite his young age, and was impressed by his technical ability and passing range – something that comes as no surprise given his roots.

“I can’t wait to come to Halifax to meet the other players and the supporters that I know always come out and support the Wanderers,” Callegari said. “I’ve never been before, but I can’t wait to discover Canada; I’ve only heard good things! The club has kept important players from last season, so I think there will be a good atmosphere within the team.”

Callegari becomes the third brand new addition revealed by the Wanderers this offseason, with Canada U-20 international Tiago Coimbra and Vaughan Azzurri standout Massimo Ferrin joining, with former Eddies loanee Wesley Timoteo set to suit up for the side this year too.

The Halifax Wanderers are set to undergo their first campaign under the helm of Patrice Gheisar, who will instill a comitted attacking philosophy to the east coast side.

Callegari joins one a one-year deal with an option for 2024.