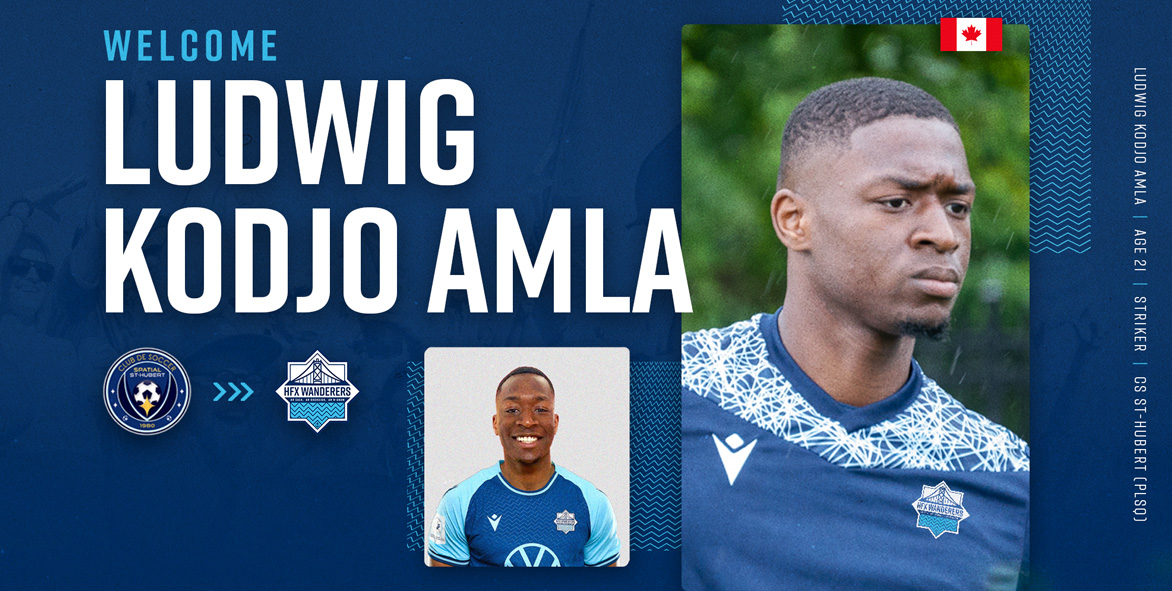 It’s been a wild week for new Halifax Wanderers striker Ludwig Kodjo Amla, a Danish-born athlete who played an exhibition match against the Wanderers U-23 side before signing with the senior team this weekend.

The six-foot-four striker played 53 minutes of action in last night’s 2-4 loss to York United, with head coach Stephen Hart throwing the 21-year-old right into the mix.

“Ludwig is another young Canadian talent we have monitored for a couple of years,” explained Sporting Director Matt Fegan. “He combines pace, height and finishing, qualities we have wanted to add to our squad this summer. “

He arrives to an east coast side now double-digits away from a playoff spot, with other reinforcements like Mour Samb and Fumpa Mwandwe also hoping to charter a new course for the club.

Amla’s new chapter out east isn’t his first stint with professional football: he played professionally for Macedonian top flight side Makedonija Gorce Petrov last year. Following that, he returned to Quebec to join CS St-Hubert for the 2022 PLSQ season, bagging a hat-trick against AS Blainville.

The tall striker then spent the last few weeks on trial with the Halifax Wanderers, rejoining his PLSQ side to showcase himself in an exhibition match against the Wanderers U-23. He did well, bagging a brace in a 3-2 win before a full contract offer from the east coast club was finalized.

Related: A Deep Dive Into The Halifax Wanderers U-23 Roster

The club’s long-term scouting of Amla has resulted in a contract that runs through the 2023 season, with a club option for a further year. Amla isn’t the only player to sign for the Wanderers after playing a match against them this year, with Ryan Robinson having suited up against them with the Vaughan Azzurri in preseason before being invited to join.

While of Togolese descent and born in Denmark, Amla grew up in Quebec and holds a Canadian passport. He developed with B.67 in Denmark, and the likes of Cosmos de Granby, CS Longueuil, and FC Saint-Hyacinthe in Canada before making a splash as the 2018 Championship MVP with College Ahuntsic – the same place MLS SuperDraft pick Charles Auguste played.

“At just 21, he has already challenged himself overseas in a tough league which is always a good test of character. He arrives as a young striker, hungry to show he has what it takes to succeed in the CPL, and that desire is exactly what we need in our playoff hunt,” added Fegan.

Head coach Stephen Hart – who has struggled to find a true attacking rhythm for the team in the absence of Joao Morelli – states that the striker gives the club something very different up top: excellence in the air and the ability to make lots of space.

Kodjo Amla’s first steps on the pitch came just one week after he blended into the crowd to watch a home match against FC Edmonton, which gave him a good inside look at the club’s consistently thunderous support.

“When I came to watch the game I saw the fans and I was thinking ‘wow, I want that to be me [out there]’. Halifax has a big fan base so I’m excited to be a part of this team and play for these fans.”

While the 21-year-old’s first match proved to be a tough debut, Amla and his new Wanderers side still have eleven more matches to go in order to turn the season around – though by this point they’re a significant underdog for a playoff spot.

Amla wasn’t the only young face to make a first appearance in the matchday roster, with U-23 goalkeeper Aiden Rushenas riding the bench behind Christian Oxner.