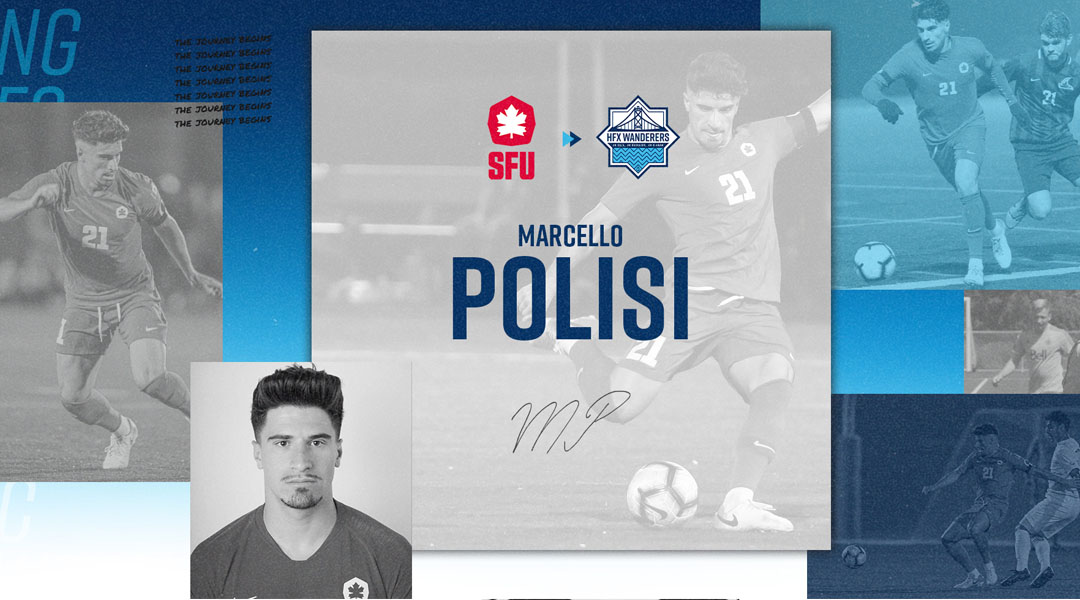 The Halifax Wanderers have signed Canadian midfielder Marcello Polisi to a one year contract with an option for a further year.

Both Marcello and his Pacific FC-bound brother, Matteo, had hoped to feature in the 2021 MLS SuperDraft. Instead, both will be looking to hold breakout seasons in the Canadian Premier League.

The 24-year-old midfielder rose through the ranks at the Vancouver Whitecaps Academy from the the age of 11 to 18 before diving into NCAA action with Simon Fraser University. At the same time, he also picked up some USL2 experience with the TSS Rovers before now getting his first professional playing opportunity.

Marcello is a central midfielder, more of a holding type midfielder, good passer of the ball, sort of gives more coverage for the midfield than we presently have which is a more attack-minded midfield. He’s a different type of player, he’s more of a traditional sort of holding midfielder.

Polisi has also featured for Canada at the U-15 level at the Copa Mexico de Naciones, though he hasn’t been part of Les Rouges at the U-23 or senior levels.

Due to tight timelines required for Polisi’s quarantine period, the club’s newest addition will be meeting up with his new teammates right in Winnipeg when both arrive separately for the bubbled start of the 2021 Canadian Premier League season.

With Polisi having been touted as being MLS-capable by his former head coach at SFU, there’ll be some high expectations awaiting him when he integrates himself into the squad.

For me, I want to establish myself right away and make an impact on the team as quickly as I can. I’m really looking forward to the opportunity to do just that.

While some fans may have been surprised to hear Polisi’s name as the newest addition as opposed to some of the trialists who have been seen at preseason camp, the 24-year-old explains that he’s kept in touch with head coach Stephen Hart over the last couple of years. This year, those chats progressed quickly into a professional contract offer.

The east coast Canadian Premier League team has now signed 22 of 23 players ahead of the upcoming season, which means only one roster spot remains to be contested for. Current trialists include former Raith Rovers full-back Jamie Watson, former Wanderer Luke Green, and local athletes Anthony Phelps, Brandon Phelps, Kaveh Wornell, Sulley Elomrani, and Domenic Lacroce, who are more likely to join the club’s U-23 Selects squad.

The club added four domestic signings over the last two days, with Scott Firth rejoining the side in tandem with 2021-CPL U SPORT Draft picks Stefan Karajovanovic and Kareem Sow.

The financial terms of Polisi’s contract were not disclosed by the Halifax Wanderers.