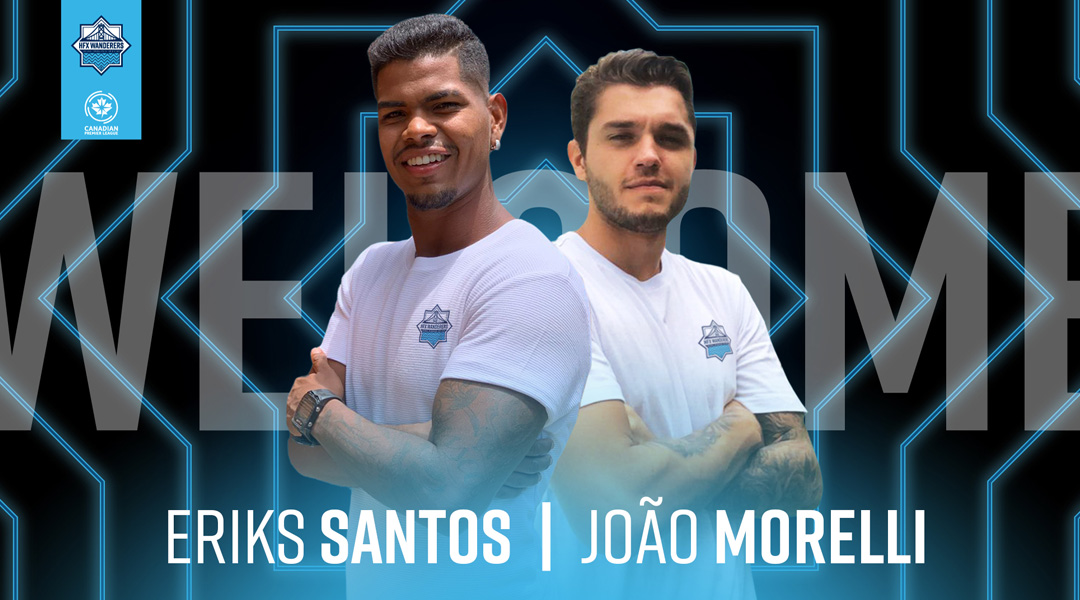 Today the Halifax Wanderers have confirmed the signing of two Brazilian players, with the east coast Canadian Premier League side bringing in attacking midfielder Joao Morelli and centre-back Eriks Santos.

Joao, 23, progressed through the academy at Brazilian side Ituano FC, where Juninho – who once played for the club himself – earmarked him as a one to watch for the future. The right-footed forward left Brazil to sign for Championship side Middlesbrough in 2015, becoming a regular for Paul Jenkins’ U-23 squad as he developed.

He signed a one-year extension with the side in 2017 before being loaned to Estonian side FCI Levadia, where he got his first taste of Europa League action in the qualifying rounds. Despite scoring an impressive 19 goals in 26 games over in Estonia, he then left Middlesbrough to sign for League One side Fleetwood Town on a free transfer before returning to Ituano FC and, briefly, back to Estonia with FCI Levadia where he contributed 11 goals and 11 assists in 29 top flight matches last season.


Morrelli plays in the number ten role, and as a proven goalscorer from midfield he’s expected to slot alongside attacking players like Jamaican international Alex Marshall and CCAA standout Ibrahima Sandoh.

I’m really excited, I see the football there is growing really fast in Canada and I think I can bring something different and some Brazilian blood and try to put on a show and bring victories and goals.

In the 2019 CPL season, the Halifax Wanderers had more free kick goal attempts (21) than any other team, but failed to convert any of those set pieces. Head coach Stephen Hart says that this is an area that Morelli – who has been attributed as a dead ball specialist – can help with, along with adding a dash of attacking flair alongside the likes of Alessandro Riggi and Aboubacar Sissoko.

Morelli can make that final pass and has shown he can score goals from open play or free-kicks which we lacked last season.

The other Brazilian newcomer, Eriks Santos, is a physical presence who will help shore up the Wanderers defense. Standing at six feet tall, the 24-year-old looks to be a solid addition to a Wanderers backline that has undergone some significant shifts from the 2019 season.

The fans can expect me to work hard every day and fight when I’m on the pitch and I want to win every time, I don’t care if we play low or high teams, I will fight the same every match.

Santos started his youth career as a thirteen-year-old with Brazilian Serie A side Internacional, and represented Brazil at the U-15 level at the Copa America. While he signed his first-ever professional contract with Internacional at the age of sixteen, he never made his debut for the senior team. He signed for Ukranian side Mariupol in 2017, and then transferred to Georgian side FC Dila Gori in 2018, where he went on to make 37 appearances in the country’s top flight.

Santos is composed at the back and looks very good in the air and of course his defending qualities have been developing in some difficult leagues.

Assuming that the club signs CPL-U SPORTS Draft picks Jake Ruby and Cory Bent, the club will then have 21 roster spots filled. The club has stated that these 21 players complete the squad, with two roster spaces left unused (though these can be filled later, assuming there’s cap space left to do so). This also means that the Halifax Wanderers have become the first CPL team to complete its roster for the 2020 Canadian Premier League season.

Given that the club released sixteen players back in November, that’s quite a feat for an east coast side which, on paper, appears to have delivered on its president’s promise to feature players of a higher pedigree for the club’s second season.

The Wanderers have used all seven available international roster spots for the club’s 23-man roster. Details pertaining to the contract length and financial compensation for either player were not disclosed by the Halifax Wanderers.