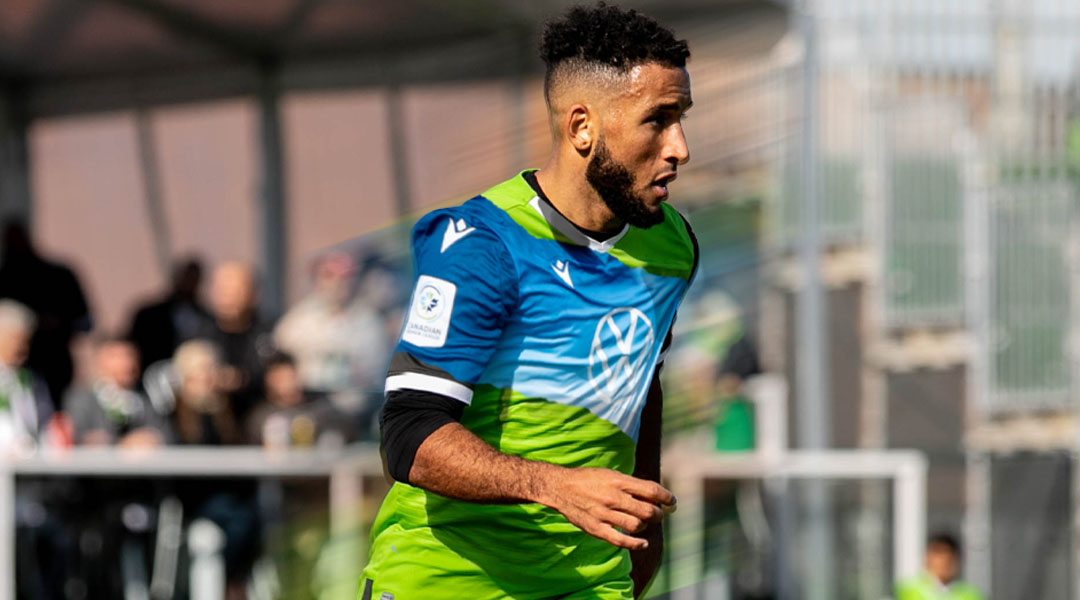 The 26-year-old full-back had mutually terminated his contract with York United two months ago, with the Halifax Wanderers quickly capitalizing on the opportunity to bring the right-back to Wanderers Grounds. Doner had made 36 appearances for the Nine Stripes, most recently completing an iron man season for them at The Island Games.

As it turns out, the transfer itself was largely sorted just days after the defender mutually agreed to terminate his contract with York United. While Doner was considering some options overseas at the time, Halifax Wanderers head coach Stephen Hart messaged the defender on the first weekday after his free agency took hold, with the quick approach giving Doner pause for thought.

That made me think about things differently, and he was quite direct with me and really wanted me to come onboard. For me, Halifax was something that was always in the back of my mind and I couldn’t give up the opportunity to be here.

It wasn’t the first time the duo had talked, with the Wanderers gaffer having expressed an interest in him prior to his first professional contract with York United. Evidently, that mutual interest hadn’t waned over the two years since those early chats.

By the time Doner exited the Nine Stripes, he had racked up some 3,240 professional minutes of action for the Canadian Premier League side. While his time with York United ended at his own request, he made it clear that he remained grateful for the opportunities he was given by the club over the last two years:

York gave me my first professional contract. Jimmy knows me from Aurora, and he’s always looked out for me. That’s something that meant a lot for me. We both respected eachother, and he’s given me a lot of chances for me to make a name for myself in the CPL. After the Island Games when I talked with a few players, after we didn’t play the best tournament, it was something that in the back of my mind that maybe I needed a change and a fresh start. Sometimes these things happen in football and in life, you just want something different. I had two good years at York, I gave everything that I could to the club, and now it’s a new chapter for me. I’m very excited for that.

If anyone would have given up a guaranteed contract in a pandemic to pursue higher aspirations, it would have been Doner. After all, he’s already exerted plenty of sheer will and ‘against the odds’ defiance to force his way into the professional game: years ago, a young Doner saved up travel money in order to ply his trade in Brazil’s lower leagues, and even his return to North America saw him trek out for a playing opportunity in Florida with the Palm Beach Suns in an effort to get noticed.

Once back in Ontario, he managed to convinced then-Aurora FC Captain Jim Brennan to let him trial with the League1 Ontario outfit, with the Collingwood-born athlete earning a spot in the semi-professional side. By the time York9 FC (now York United) launched, Morey had captained Aurora FC and was invited up to the professional level. In the following year, he won the fan vote for best right back and put out an iron man season in 2020.

It says a lot about his character.

I think it’s the way I was brought up. I come from a very small town, and I’ve tried to do the best that I can with what I have. I wasn’t really given the easy route: I haven’t been in a big academy setup and didn’t have any connections growing up, so for me it was just about given a hundred percent and what I do off the field, trying to make myself better so that when I have those chances I’ll be ready for them. I was lucky enough to have a chance at York9 FC and prove myself in the league, but now it’s about pushing off to that next level.

When York United announced his departure, the official statement made mention of Doner’s desire to pursue an overseas opportunity. When asked about that, the defender stated that he had a few options overseas that weren’t finalized yet before Hart pounced on the opportunity. While he still has aspirations of playing in Europe, the opportunity to play for the east coast CPL Finalists was something he couldn’t resist.

Halifax is one of those goals for me. I think the reason why I’m here is because I want to win championships. I was looking at their results and the way they played at The Island Games, and who wouldn’t like how they played? Of course, Stephen Hart won coach of the year too. That was something that I couldn’t pass up. I’m happy to be here, and it’s going to be a great start for me.

It’s something special. I think everyone can say that, whether they’re from the team or not. It was only my second game when I made my away debut there, and it was sold out, and the fans were so passionate. It was how I felt about football growing up, it’s a special feeling. What made it even more special is when we got off the field. A couple of teammates and I went downtown for a bite to eat after the game, and the Halifax fans were wearing jerseys around the downtown core in the pubs and came up to us and chatted, and made some jokes, and you could really feel the culture here. It’s something that is special, and it’s going to be something really great for me to experience. I know that if I give my best on the field, they’ll appreciate that as well.

While the Halifax-based club’s stadium was packed in 2019, the results didn’t exactly follow: the club finished dead last after a year of poor away form and several draws at home, with Hart admitting that the club’s playstyle was more fitted to his available players rather than the way he wanted to play. The gaffer replaced the majority of his roster last year, with his new squad then coming ninety minutes away from a North Star Shield.

In Doner’s observation, the Island Games was proof that the Wanderers’ new fluent attacking identity now matches what the club gaffer had always hoped to put out:

I think that Stephen Hart has the players that he wants now, and you can see that they’re playing a a good style of play on the field. I think that the first year everyone was still up in the air, and now you can really see his coaching abilities and the way that he wants to play. It’s very attractive to the eye. I think they were obviously one of the best teams at The Island Games, and they never give up and play right to the end. That’s something I can see in myself and pride myself on, giving my best on the pitch, and I think there’s mutual respect with Stephen and I.

Now in the midst of quarantining in Halifax, the 26-year-old is eagerly waiting for the next chapter of his playing career. He’ll once again don the number three, which Jems Geffrard left vacant after opting to take the number six left behind by Chrisnovic N’sa. He arrives on a one year deal with a club option for 2022.

Given that both right-backs essentially swapped clubs, there will be ample comparisons made between the duo. Assuming that home markets get the green light for the 2021 Canadian Premier League season, Doner’s first away trip to York Lions Stadium will be an interesting affair – especially with N’sa likely occupying his old spot on the Nine Stripes roster.

You kind of circle that on the calendar when you face someone that you’ve played for before, which will be a first in my professional career. In regards to Chris and I, he’s a versatile player who can play centre-back and full-back and for me I’m always going to be the right full-back. It’s good that he wanted a fresh start and so did I, and now we’re on two opposite teams, but it’s a familiar background and I walked out there for my professional debut. It’s a special place in my heart.

Circling back to Geffrard, the Haitian international is one of twelve Wanderers that a club roster update confirmed would be returning for the 2021 season, including standout players like Joao Morelli, Cory Bent, Andre Rampersad, and Golden Boot winner Akeem Garcia. When he looks at his new club’s roster, Doner is impressed with what he sees.

There’s quality there, and that’s why I’m here. I want to play with really good players, I want to get better as a player and a person as well, and these are things that I look for. It definitely meets my standards and I hope that we can do amazing things.

The Halifax Wanderers have a few more announcements slated for January, so by the end of the month fans should have a better idea of what the majority of the 2021 Halifax Wanderers squad looks like. Depth right-back Jake Ruby is expected to attend preseason camp later this year to fight for a spot in the squad, so for the moment it remains to be seen who Morey’s main competition at right-back will be.

Whatever shape the final roster takes, Doner arrives as a proven quality at the Canadian Premier League level searching for a fresh start within the domestic league. After seeing York United miss out on the group stage of The Island Games, he arrives eager to prove himself at a club that went even further in the bubble tournament.

The financial details Morey’s contract were not disclosed by the Halifax Wanderers, though the club did disclose he signed on for a one-year deal with a club option for 2022.