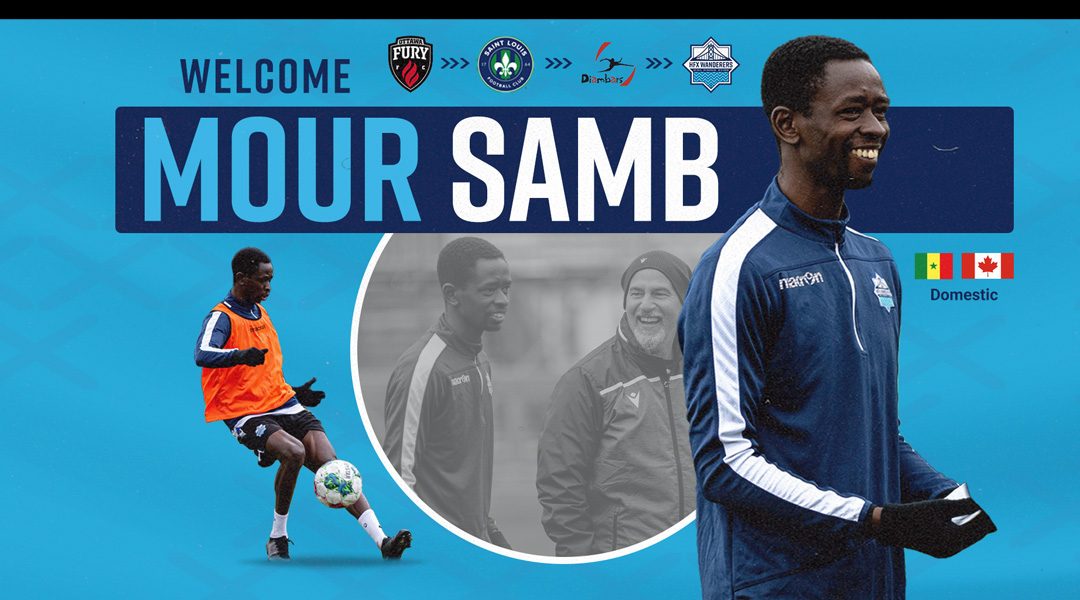 Make no mistake about it: when Joao Morelli went down at TD Place a few weeks ago, the entire Halifax Wanderers front office held its collective breath. So did the rest of the league.

It wasn’t long before last year’s golden boot winner and CPL MVP was confirmed out for the season, with the east coast side now tasked to find a replacement for someone who, quite simply, had performed without any equal at this level.

Two-and-a-half weeks later, the Canadian Premier League side has landed on Senegalese-Canadian forward Mour Samb for the tall task.

The six-foot-tall striker arrives to Wanderers Grounds with experience from Europe, Africa, and the USL Championship, where he’d played for the likes of the Ottawa Fury and Saint Louis City. Having most recently enjoyed a third stint with Senegal Premier League side Diambars FC, the club hopes he can help restore some of the goal tally that would have presumably been provided by Morelli.

It’s a search that the club said it wouldn’t rush, though they managed the feat in about two-and-a-half weeks, having reportedly skipped over on the hunt for Austin Ricci.

“We’ve been actively pursuing another attacking option to complement the squad right away,” revealed sporting director Matt Fegan. “Our priority was finding a player who we felt could best adapt to the CPL and immediately hit the ground running. In Mour, we’ve secured a player who has tremendous experience overseas as well as more recently in two seasons in the USL.”

The club’s new number eight began his career in Senegal, playing for Diambars before signing with France side Lille OSC. He spent three years with the B team, recording seven goals in 41 matches before returning to Diambars in 2015. He’d test himself in Europe with Norwegian side Tromso two years later, making 27 appearances throughout two seasons.

It was after that when he landed with Ottawa Fury, playing alongside the likes of both Aidan Daniels and Jeremy Gagnon-Lapare. He struck a prolific note in the USL Championship, contributing eight goals and six assists throughout just 19 matches – though by chance he was absent in the club’s cup clashes against the Wanderers back in 2019.

The Senegalese Sensation’s ties to Canada only strengthened when his daughter was born in Canada later that year.

With the Fury folding afterwards, he and Gagnon-Lapare both signed with St. Louis FC in 2020, where he went on to score two goals in 11 games before returning to Senegal. Given his familiarity with two key Halifax players, there’s an added believe he can hit the ground running.

“He has proven he can score at this level,” added Fegan, noting that the the Senegalese-Canadian can also play across a variety of positions in the front line, just like Morelli. Whether the truly follow remains to be seen, but he’s certainly an interesting addition who arrives with a high ceiling.

Mour shows a lot of desire and passion for the game, and his enthusiasm is always present. I think the fans will love his willingness to run at the opposition and his ability to play with both feet.

Samb arrives on a contract that will run for the remainder of the 2022 CPL season with a club option for a further year. He counts as a domestic player having achieved permanent residency status in the country.

The Halifax Wanderers also announced the arrival of Kareem Sow earlier this morning.