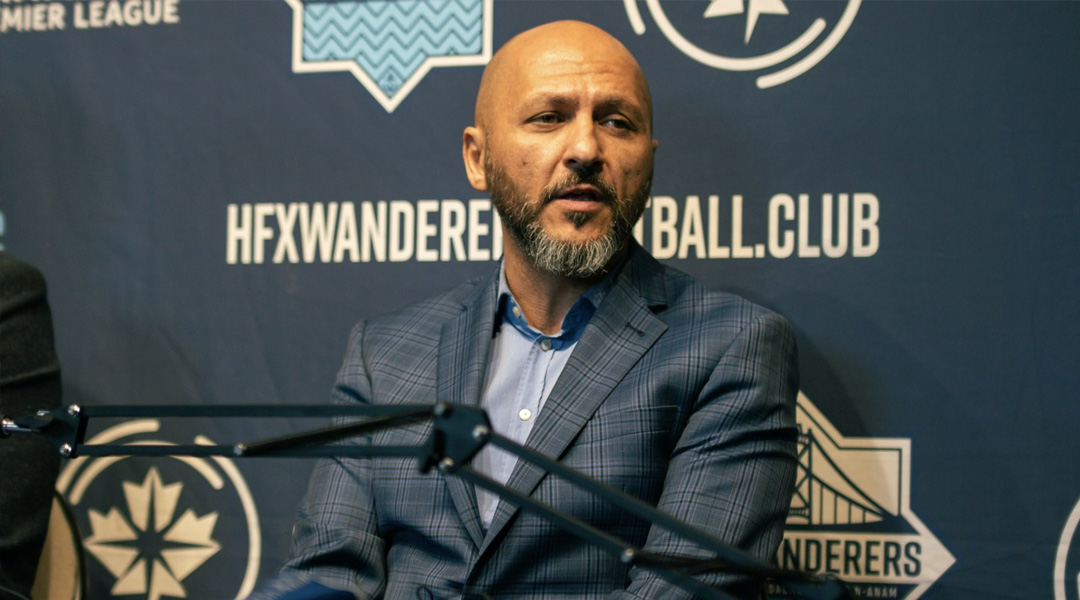 The Halifax Wanderers named Patrice Gheisar as the club’s second-ever head coach this morning, with the League1 Ontario veteran now set to lead the east coast CPL side into its fifth season.

Gheisar’s last two regular seasons in League1 Ontario saw his Vaughan Azzurri team remain undefeated, with his tenure ending with a championship win this summer, a +114 goal differential, and and an L1O coach of the year award.

The last two seasons have been comparably difficult for the Halifax Wanderers, who missed playoffs on both occasions while scoring the least out of any CPL sides. That led to the sacking of Stephen Hart 48 days ago, with Gheisar beating our over eighty applicants to succeed him.

Halifax has faith that Gheisar is the right man to steer the side into a bright future, with OneSoccer’s Adam Jenkins uncovering plenty of what fans can expect in an early discussion with the gaffer:

Gheisar’s Azzurri side stormed to a championship win this year on the back of a foot-forward, attacking identity, and that’s something that he’s now expected to bring into a Halifax Wanderers side that has struggled to produce from open play and, some thing, has been to conservative on the pitch.

“Our identity is going to be attacking philosophy. The principles will be combination play, pass and move into space,” says Gheisar. “I think we’re going to commit players into attack.”

The new Halifax gaffer believes a hard-working, attacking identity fits the city well, and he’s confident that fans will back the philosophy once they see it on the pitch. He’s also keen to take advantage of the rapturous, sellout crowds at Wanderers Ground to make visits out east more intimidating for the opposition.

“We need to bring fear, and for [other clubs] not to look forward to come to Halifax,” he adds, noting that players will be encouraged to take chances and work as a team to be on the front foot. Don’t expect two defensive-minded midfield pivots here, it seems.

The Halifax Wanderers have to endure a lot of travelling throughout a standard Canadian Premier League campaign: more isolated than either CPL side, the travel minutes mount quickly, and are detrimental to player fitness and training time.

To help the team perform on the road, fans can expect to see Gheisar implement an organized system of roster rotation to keep players from running out of gas.

“Our objective will be to have a key rotation system so everyone contributes. When you look at that, it’s key and exciting to every player because we’re not going to have players that believe they’re going to be bench players. We also don’t want to have players that believe that they’re going to play every minute of the game as well,” says the club’s new gaffer.

In addition to this, the head coach says he will need to utilize a deep roster to cope with a travel system that has describes as ‘certainly challenging’.

“We need every every member to be able to contribute so we can continue to be fresh. Meanwhile, we adjust our training sessions to make sure not only are we fresh, but also remain sharp because you could end up playing on a Saturday and you’re playing miles away on the Wednesday, and it limits your ability to train. “

It’s no secret that Joao Morelli has been a talisman for the club when healthy, but his absence through injury in 2022 was felt all season long, and even before that the club slipped out of playoffs in the month he was sidelined.

To that end, Gheisar wants a more balanced approach to goalscoring contributions.

“We don’t need everyone anyone to get twenty or twenty-five goals. I mean, that’d be great if we do, but we’re not going to look to put pressure on one player: we’re going to look to have contributing factors. A lot of that starts with making runs in key areas, putting numbers into the eighteen yard box, looking to stay connected. The assist is as important as the goal.”

Who Gheisar recruits to be part of this initiative remains to be seen: with the majority of the roster on club options, the new gaffer will need to select who stays and goes ahead of December 31. Club President Derek Martin surmised that up to half of the existing roster might move on.

Patrice’s appointment comes after he showed consistent domination in League1 Ontario, where his last regular season loss came in 2019. Having helped coach many current and former CPL players, in addition to the likes of World Cup players Dayne St. Clair, Kamal Miller, Jonathan Osorio, and Alistair Johnston, it’s clear he’s ready to coach the next level.

Still, some questioned the appointment of a head coach who doesn’t have professional experience at the club level, though three-time league champion Bobby Smyrniotis had a similar resume in 2019.

“I feel the responsibility of representing all the other coaches to show that this pathway should continue,” says Gheisar on the topic. “I want to thank League1 Ontario for providing a platform for players to succeed, but most importantly, for coaches to be a part of, and this is a clear indication that there is a pathway for not only players, but also coaches to move forward. Who knows where their journey takes them and how high they can go up?”

It remains to be seen if Patrice will name his assistant coach from his prior league, though it has been confirmed that goalkeeper coach Jan-Michael Williams will remain.

…That Player Pipeline Will Likely Be Used By Gheisar, Though.

Patrice knows League1 Ontario inside and out, and he believes that’s about 30-35 players in the semi-professional ranks who could play at the Canadian Premier League level. Given his intimate knowledge of the setting, it’s likely we’ll see Halifax recruit from this Ontario-based talent pool.

“There’s no one League1 game this past season that I didn’t watch for recruiting purposes,” says Gheisar, who states that the next big question is who on his shortlist have the ambition to play the professional level and keep growing.

Related: Five League1 Ontario Athletes Who Could Jump To CPL Next Year

“For me, again, when we go back to my first point is we need good people, I think it’s going to mean as much to set up the goal as it is to score the goal. That’s the attitude that we want in the locker room, I think that gets rid of and eliminates the selfishness of someone wanting to do too much, because we’re all gonna have to contribute in one way or another.”

Patrice and the Halifax Wanderers will have a flurry of big choices to make in shaping the club’s roster for 2023. We expect that roster decisions will be made in short order, and believe some have already been made behind the scenes.

Whatever happens next, it’ll be exciting to see how the League1 Ontario to CPL pipeline works out for Halifax’s new boss.