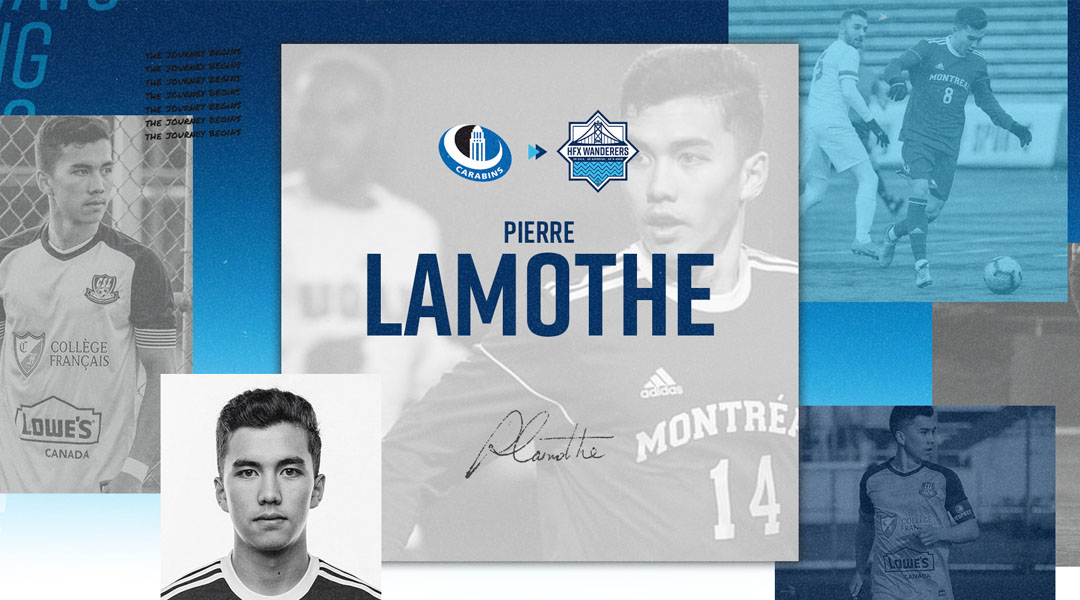 With yesterday’s news that the Halifax Wanderers have signed 23-year-old Pierre Lamothe to a professional contract, the youngster can breath a sight of relief: he’s been targeting the Canadian Premier League ever since it was announced, and he’s finally hit the bullseye.

The former Impact Academy graduate came close to the mark in 2019, making waves as a CPL-U SPORTS Draft shortlist pick as the Montreal Carabins put in a strong showing at the Montreal-based Men’s Soccer Championship. The draft came and went without Lamothe getting a nod, though his teammates Omar Kreim and Aboubacar Sissoko were offered professional contracts.

Lamothe kept in touch with the duo, eventually hearing that Wanderers head coach Stephen Hart was interested in signing the Longueuil-born midfielder. Things moved quickly after that, with today’s announcement taking its biggest strides in October, when Lamothe signed with the OBELISQ player agency.

While his first professional contract has come at the age of 23, Lamothe has a lot of experience under his belt: having joined the Impact Academy at the U-14 level, there was no youngster who had clocked in more youth minutes than him when the graduated at the age of 18.

After a short trial overseas with the FC Loriente reserves, he returned to Canada and got a handful of minutes in the USL with CF Montreal’s old affiliate side, FC Montreal, which was in its final months. The experience was short-lived, however, with Lamothe having nowhere to go after the side folded. He opted to pursue a university education while playing semi-professional football at the PLSQ level, joining hometown side CS Longueuil.

Lamothe describes his time with Longueuil as perhaps much better for him than it was for the team, which featured a lot of young faces and did not perform well in league action. Still, Lamothe found himself handed the captain’s armband and adapted to a lot of new responsibility with the side, crediting his coach for having faith in him even back then.

I improved a lot that year. It made me more confident on the field, I took more risks, and developed certain aspects of my play. I grew from that feeling.

With the eventual arrival of the 2019 CPL-U SPORTS Draft, Lamothe made the shortlist but ultimately went unselected. He had publicly set his sights on the Canadian Premier League by that point, and didn’t want the opportunity to pass. So, after three seasons with CS Longueuil, Lamothe made the decision to move to PLSQ title holders AS Blainville.

The chance of getting noticed is bigger, and it was one of the factors that made me make my decision. I knew they were playing in the Canadian Championship, but it was also getting in an environment where I can improve by training hard everyday with experienced players. I had to get to another level to continue developing as a player, and I felt Blainville was the best place for me to continue that.

Like so many others, unfortunately, Lamothe found his plans for 2020 largely curtailed by the COVID-19 pandemic. The PLSQ season had to end early, with AS Blainville retaining the title by way of having the highest points per game. Lamothe picked up an injury during the short campaign, only playing in one match throughout the shortened season. The Canadian Championship was also modified to exclude the semi-professional side, so he never got to showcase himself against CPL opposition.

Despite this, Lamothe heard from his former Carabins teammates Omar Kreim and Aboubacar Sissoko that Hart – who had watched him play at the U SPORTS Men’s Soccer Championship in 2019 – was still interested in signing him. Out of nowhere came the opportunity he’d been waiting for, and it didn’t take long before the ink was dry on a contract.

I think it’s a big weight off my shoulder. I’ve worked hard for so many years to reach this objective. Since I entered the Impact Academy, my goal was always to become a professional player. My dream just came true – I’m just very happy to join Halifax. I couldn’t think of a better place to start, and I’m excited to get there and begin.

Having fully recovered from the injury that sidelined him at AS Blainville some time ago, Lamothe – who follows a healthy diet and keeps himself fit – is ready to prove his worth at the Canadian Premier League level. He’s biding his time in Montreal, training and waiting. With players not required to be in Halifax until March and the season not tentatively set to begin until May, there’s a lot more waiting still ahead.

When the time comes and he is able to make his debut at Wanderers Grounds, the attack-minded midfielder believes he can bring something different to the east coast club. Given that he prefers to be in an attacking midfield role, he’ll likely be a depth option behind Brazilian forward Joao Morelli.

I always play in the middle, I can play different positions in the middle. I’m more of an offensive player, good in possession. I like to have the ball, and I think my number one quality is my technique. Over the last few years, I’ve worked a lot on what I can improve. I think I can bring something different to Halifax, something that we don’t see a lot. It’s a creative side of my play. You can find me a lot in the final third, but I can be the position guy too.

It’s been a long road for Pierre, and the time is almost here for him to don a Wanderers kit and show what he can really do at the professional level. If he finds success here, he’s not saying no to his old dreams of moving to Europe – but first comes showing that he can play at the CPL level.

The Halifax Wanderers have now signed sixteen players ahead of the 2021 Canadian Premier League season, four of which have now come in the last month alone. With the 2021 CPL-U SPORTS Draft set for this Friday, Pierre will have a much easier time watching the draft picks now that his professional contract has already come through.

He’s far from the only Wanderer who truly lived up to the club’s name in order to get here, too.

The Halifax Wanderers did not disclose the financial details of Lamothe’s contract, signing him on a one year deal that includes an option for 2022.

Hundal Hungry For Next Opportunity