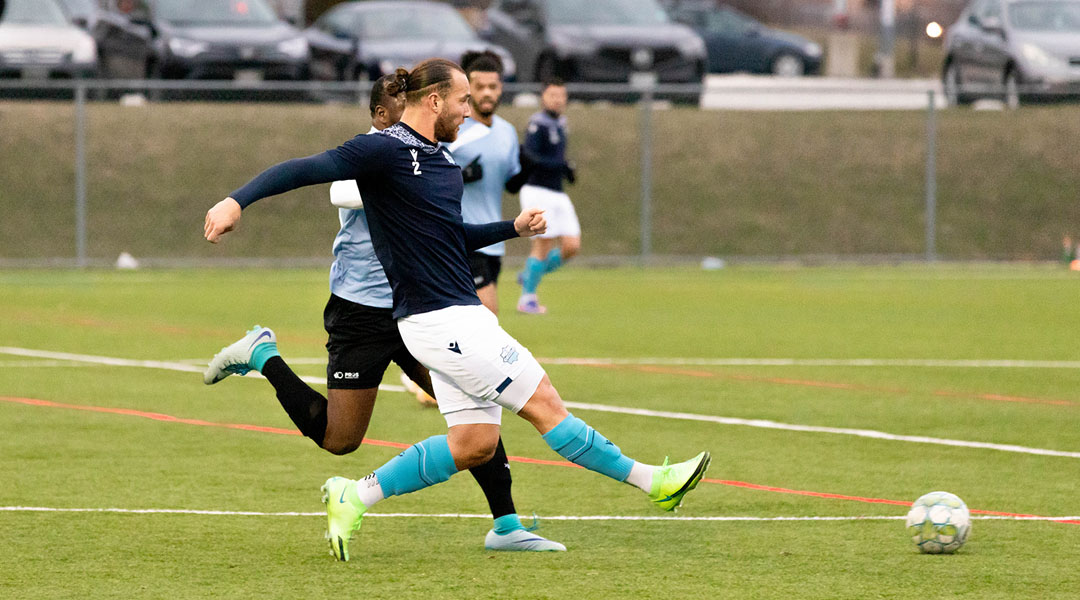 The Halifax Wanderers finished their Ontario-based preseason camp with a 1-0 win over League1 Ontario expansion side Simcoe Rovers on Thursday before coming home.

That means the east coast visitors concluded their time in the province having collected a 1-0 win against Vaughan Azzurri, a 5-0 win against the Woodbridge Strikers, a 2-1 loss against Forge FC, and Thursday’s 1-0 win over the Rovers.

While a handful of clubs flew either out of country or out to the west coast for their preseason trips, the Wanderers toughed it out in a province that saw its fair share of rain, snow, and wintry conditions.

“It’s been a bit trying, weather-wise,” admitted Hart after the match against the Rovers, “But all-in-all, not bad. We had some players come in late because of visa issues or injury issues, but I’m pleased that we’re making the right progress.”

A goal from Joao Morelli saw the side surpass League1 Ontario expansion side Simcoe Rovers, who’s best opportunity came through Leaford Allen during a breakthrough in the first half. The second half saw the Wanderers earn a penalty, and while it went high the club saw out the match and earned the majority of chances.

Last night’s 1-0 victory was a win, though it showed Hart some clear areas for improvement to make in the short time before the season kicks off.

“Each game we went into we try to we try to do something specific,” said Hart. “In the first first half of this game, we we were trying to attack the space behind on a regular basis. We ran out of our discipline after a while, and we just started keeping the ball and the second half was not what I like, but it is preseason, it’s gonna take a little while.”

The Wanderers will be returning to Ontario to play competitive action next week, opening their fourth CPL campaign against a York United side that will be hungry following a testing preseason campaign. It’s a Nine Stripes side that just barely edged out Hart’s Wanderers for a postseason spot last season, with Halifax dropping out of the top four whilst star player Joao Morelli was sidelined.

“If my memory serves me, we tied eleven games last year, and that’s that’s a killer. We should have been more efficient in front of goal. Even tonight, we have a lot of chances that we wasted and we can’t allow that to happen this year. If we keep doing the good things, and we learn to be more composed in front of goal, I think we win matches.”

Given that the Wanderers had finished last season was the same amount of losses as eventual winners Pacific FC, converting those single point pickups into three is likely high on the objective list out east.

Hart hopes to see his side start out on the right foot against York United next week, but Wanderers fans will need to be aware that the club doesn’t have a full bill of health. The biggest absence on the pitch right now is Mohamed Omar, the first round MLS SuperDraft pick who landed with the Wanderers after York United had eyed the highly-rated talent.

“We have a few players who will need a little more time, but we’ve got a nucleus that can come to the game. Aiden is settling in fine, he’s doing well, and the two new fullbacks are too.”

Hart looks to have built upon his roster smartly in the offseason, though how the side carries on in its fourth campaign remains to be seen. The full Halifax Wanderers roster isn’t set in stone quite yet, and that was evident with the number of young trialists with the team – some of whom, like defender Nic Gagan, were given further opportunity to impress in the final preseason match.