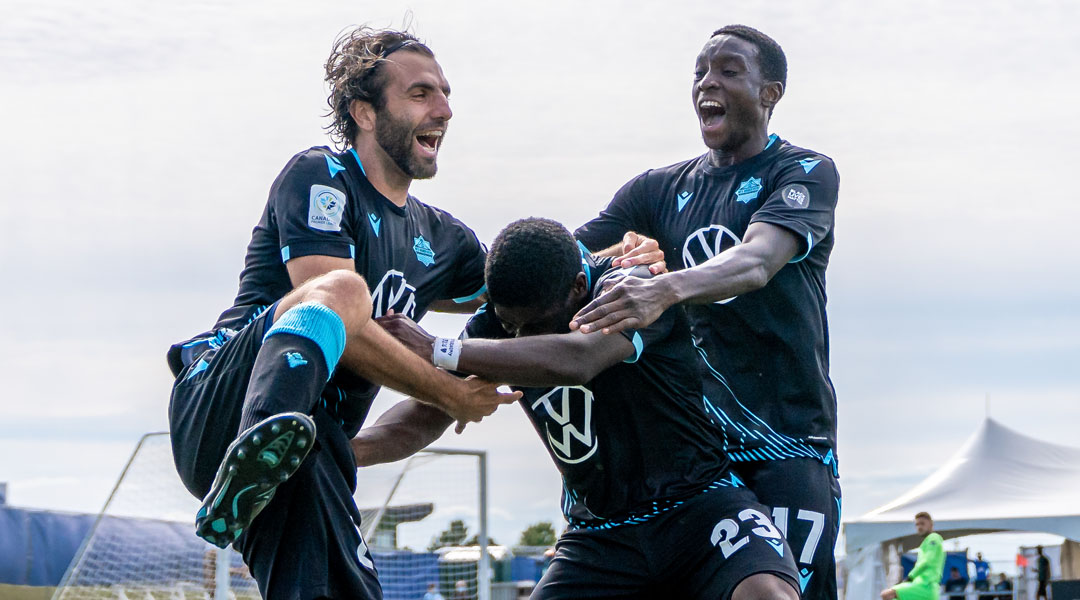 It’s an understatement to say that Aboubacar Sissoko’s first season as a professional was simply good: the 25-year-old turned heads at the Island Games, dominating in a midfield role that saw him become a firm physical presence and lead the league in terms of dribbling with a staggering 91% success rate.

With the Wanderers having now provided a transparent roster update regarding the current squad, it has become public that the club is still in the midst of contract negotiations with the physical midfielder. While there’s no doubt that fans on the east coast would like to see him back, Sissoko told the Journal de Montreal that there’s still some uncertainty with his future despite his positive feelings towards the move:

I don’t know what’s going to happen next year, my contract ends in January. They want to extend and we’re going to sit down with them, it’s a good city and a good environment.

He describes the 2020 Wanderers squad as a ‘good group’, noting that his integration into the much-transformed squad was made easier because of its large francophone contingent. His first season as a pro saw him appear in ten of the Wanderers’ eleven matches, racking up 706 minutes of game time in a campaign that saw the east coast club reach its first-ever CPL Final.

The stalwart midfielder did not view entering his first professional season as a 25-year-old as a challenge compared to what he had recently endured. His Mother, Yacine, had passed last May and was not able to see him capitalize on a stellar U SPORTS campaign to sign a professional contract.

He describes the bubble tournament as something that made him even stronger, and not just in the physical aspect:

On the one hand, it was formative, but on the other hand, I know my mental quality. It really forged me and it really made me stronger. Personally, it was pretty good on the field, I owe it to my teammates who made it easy for me.

Sissoko was drafted by reigning Canadian Premier League champions Forge FC back in 2018, but the Hamilton-based side passed on signing the midfielder at the time. He went on to win the Canadian University Male Athlete of the Year award, helping his university team to a second successive national final.

Catching the eye of coach Hart, Sissoko was signed to a professional contract by the Halifax Wanderers contract last November. Transitioning into the professional circuit is something he did well, and he credits that to the level of play that can be found in the U SPORTS circuit. In fact, he says a lot of his old teammates from Quebec are worthy of Canadian Premier League contracts:

From a soccer point of view, the transition was fairly easy because when I was at University of Montreal, eighty per cent of the players were qualified to play CPL.

One such player we’ve suspected is nearing a professional contract is Pierre Lamothe, who played alongside both Aboubacar Sissoko and Omar Kreim with the Montreal Carabins. Like the duo, he also signed with a Montreal-based player agency named OBELISQ, who represent a number of players in the burgeoning league.

It’s fair to say that the Halifax Wanderers exceeded expectations after capitalizing on Quebecois talent (the side’s Island Games roster featured seven athletes from the province), with former Wanderer Chrisnovic N’sa also echoing the sentiment that the province has more players like Mo Farsi and Felix N’sa ready to capitalize on opportunities at the professional level:

For real, there’s a lot of good talent of soccer players in Quebec. There’s still a lot. I can see every year there are a bit more Quebec players in the CPL. I know a lot of good players over there in Quebec that are waiting for this chance, to have just one minute, just one tryout with a CPL team. I think if they have that chance they will show that they got the level, and I’m excited to see if there is going to be another Quebec guy that’s going to sign in CPL, but I’m sure they’ve got the level for it.

Like Chrisnovic and Felix, Sissoko spent some time developing at amateur side CS Panellinios. He also played for PLSQ side St-Hubert while playing with the Montreal Carabins, and even earned two call-ups to the Mali U-20 squad prior to becoming a professional athlete.

Following his signing with the Wanderers, the economics graduate also earned a trial with the Vancouver Whitecaps during their preseason campaign. While Wanderers fans watched on to see if their new man might make the move to MLS before even representing the CPL side, this trial came and went without an offer – but the fact that it happened showed that Sissoko had something special.

Following a very solid showing at The Island Games, his future in Halifax is still up in the air. He ponders whether his first season as a professional athlete will open some doors for him, and at the very least it wouldn’t be surprising to see other CPL sides get in touch with the 25-year-old. After all, Chrisnovic N’sa and Joseph Di Chiara are living proof that roster moves can happen quickly following an individually successful campaign.

For the moment, Sissoko is now back in Montreal to enjoy the offseason and keep fit ahead of the new year. While many CPL contracts expired at the end of October, his runs until January, so fans may need to wait a while longer yet to find out what the future holds if he doesn’t re-sign with the club.