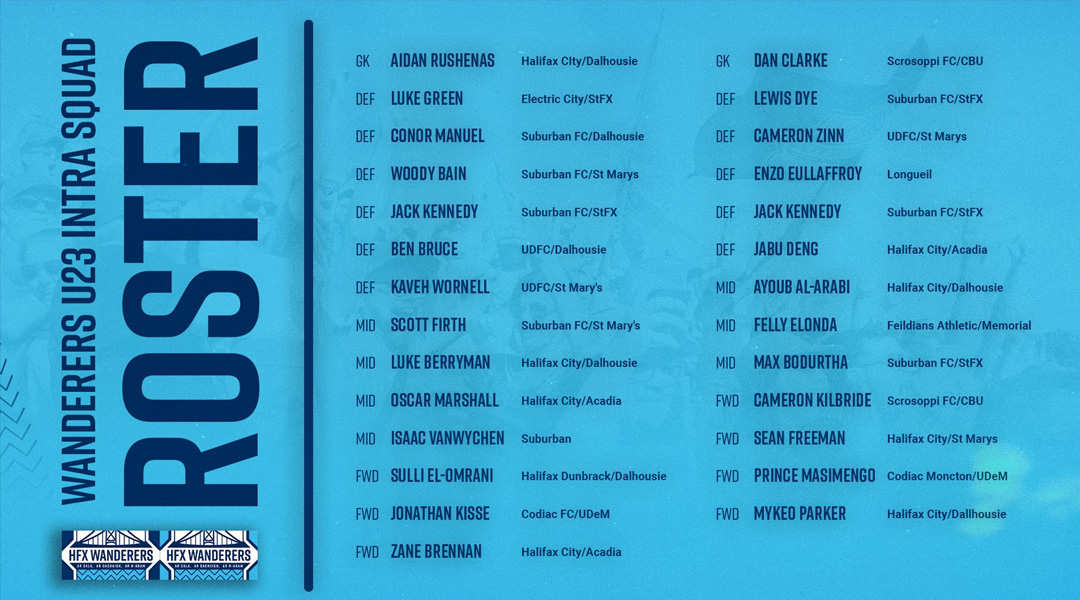 The Halifax Wanderers U-23 Team recently played its opening intra-squad match, with the east coast side revealing no less than 26 players who have been recruited by Mesut Mert.

The youth squad had begun talent ID camps all the way back in February, with the club revealing that it hoped to have a squad ready to play a sequence of exhibition matches this summer to help build a local player pathway up to the first team.

With the full roster having ben unveiled this week, we wanted to take a look at each and every youngster named to the Wanderers U-23 squad – especially as they harbor a chance to break through to the first team.

Without further ado, here’s a rundown of both intra-squad teams that we’ll simply refer to ‘A’ and ‘B’ for simplicity:

This six-foot-two Toronto-born goalkeeper has called Halifax home for the last few years.

Rushenas had spent a season training with League1 Ontario side North Toronto Nitros before enlisting with Dalhousie University, where he filled in the vacant spot between the sticks left by Ben Grondin and the injured Connor Aalders.

Rushenas finished his debut Tigers season as the league leader in saves, with a third-highest 0.827 save percentage. He was nominated for the AUS men’s soccer rookie of the year award, though that landed with Atletico Ottawa draft pick Jose Cunha.

Luke Green will be a familiar name to the Wanderers faithful, having played for the east coast side during the pandemic-impacted shortened season. He featured for a full ninety minutes in a group stage match against Pacific FC back then, and has been a regular with Peterborough’s Electric City FC this year.

The six-foot-two defender trained with the Wanderers ahead of his move to League1 Ontario, and holds AUS allegiance to Saint Francis Xavier University. Green had developed with local east coast side Suburban FC, where he credits Halifax Wanderers U-23 coach Mesut Mert for helping him reach professional heights.

Another Dalhousie Tigers addition, this six-foot-tall defensive midfielder – listed as a straight defender on the U-23 roster – hails from the CF Montreal Academy. A Haligonian born and raised, he trained with Halifax City SC and was eventually identified by Ante Jazic in a Canada Soccer youth camp. He now lists himself with Suburban FC.

This Dartmouth lad developed with Suburban FC and now features for the Saint Mary’s University Huskies. His highlight reel implies there’s plenty of versatility to Bain’s game, with the player stating he can play left back, left winger, attacking midfielder, and centre-back. Evidently, Mesut Mert wants him to hone in on his defensive qualities, though his assisting cross during the match’s opening goal shows there’s plenty to offer up top, too.

Born in Antigonish, Kennedy trained with both Highland and Suburban FC, and now plies his trade with Saint Francis Xavier University. The five-foot ten defender featured regularly for the them last year, even bagging a goal and an assist.

Another Dartmouth-born defender, Bruce developed with local side United DFC and progressed to the point where he had a tough choice between Dalhousie and Saint Francis Xavier. Choosing the former, the six-foot-one defender is now on the precipice of a professional call-up.

This centre-back also hails from Dartmouth, where he spent time with United DFC, and spent time playing alongside fellow Wanderers U-23 defender Woody Bain. He cracked the Saint Mary’s University Huskies roster in 2020, featuring in eleven matches last year.

Having spent three years with the senior Halifax Wanderers team, nobody on the U-23 squad has more professional experience than Scott Firth. The 21-year-old made 22 appearances during his time at the senior level, committing to the Saint Mary’s University Huskies this year.

Having had a prolonged taste of the professional game, Firth will be hungry to prove he can slot right back into it – and he wouldn’t be the first Wanderer to continue their education while playing pro ball, either.

2021 Atlantic University Sport All-Star Luke Berryman is an attacking midfielder born and raised in Halifax. He was named to the Novia Scotia provincial team back in 2019, which is when he made it to day two of the CPL Open Trial as a 17-year-old.

Having spent three years with the Vancouver Whitecaps Academy Centre, Berryman has a lot of upside to his game. After committing to the Dalhousie Tigers, he contributed five goals and one assist through twelve appearances last year.

Marshall arrives to the Halifax U-23 Squad with a lot of high level development to his name: he spent years progressing through the CF Montreal Academy system, participating in several competitions abroad with the MLS youth side and featuring in several youth national team camps, too.

Described as a youngster with plenty of composure, speed, and versatility, the Dartmouth-born midfielder was a regular face for the Acadia Athletics Axeman last season, and remains one for Halifax to watch for the future. Notably, all three Axeman found their way on the scoresheet in the intra-squad friendly.

Suburban FC centre-midfielder Isaac Van Wychen is certainly one of the youngest of the bunch, but he’s doing the right things at the youth level: this March saw his hat-trick for Nova Scotia secure a big win over New Brunswick, and now he’s getting an early taste against more developed athletes.

His time for the next level may not be now, but these are the kind of early experiences that can really help shape an athlete.

Halifax-born Suliman Elomrani has been a training player for the Wanderers since 2019. The six-foot-one winger played for Team Nova Scotia for four years, and he was a longtime member of the Halifax Dunbrack Soccer Club before committing to the Dalhousie Tigers.

He took to the pitch eight times for the Tigers last year, mostly as a substitute, collecting one goal and one assists in that time.

Hailing from Toronto, this five-foot-leven forward is one of the most senior players on the roster.

Kisse developed through the highly-touted Sigma FC academy system and even dipped his toes in League1 Ontario with the North Toronto Nitros. He then headed out west to Simon Fraser University, playing under current Eddies goalkeeper coach Clint Schneider and alongside current Wanderers midfielder Marcello Polisi.

22-year-old Acadia Athletics forward Zane Brennan was born in Fredericton, New Brunswick. The five-foot-nine forward has featured regularly for the Axemen over the last three seasons (with a pandemic gap in 2020), contributing four goals and four assists through 32 appearances.

The right-footed forward – who can play anywhere up at the top – had also featured in the Canada Games back in 2017, giving his kit to a young spectator and sparking a touching story.

England-born Cape Breton Capers goalkeeper Dan Clarke boasts a neat resume: he developed with the Northampton Town Football Club until his family moved to Canada, where he enlisted with the Woodbridge Strikers and, more recently, now features for expansion side Scrosoppi FC.

The 19-year-old had tested himself back in his native England with trials at Stoke City, Port Vale, and Leicester City, and has been hailed as one of the top young keepers in Canada by Deano Morley – a significant shout-out that should turn a few heads. Last year saw him help Cape Breton to a bronze medal against his Ontario hometown of Guelph.

Two-time AUS All Star Team alumni Lewis Dye is one of the top defensive prospects to watch for on the east coast. The Fall River-born athlete has made 34 appearances for Saint Francis Xavier University, where he’s been a regular face alongside his Suburban FC teammate Luke Green.

Lewis had trialed with the Halifax Wanderers during preseason, so it’s clear the club are keen to keep a close eye on him.

Bridgewater-born defender Cameron has been a regular starter with the Saint Mary’s University Huskies, where he’s made 27 appearances since 2018. He developed with UDFC.

Former CF Montreal U-23 prospect Enzo Eullaffroy has a lot of potential. The young left-back joins the east coast youth team from his native Quebec, where he most recently suited up for PLSQ side CS Longueuil, where Pierre Lamothe had also once developed.

Enzo is the new generation of Eullaffroy talent, with his father Philippe having played professionally for Troyes.

Halifax local Jabu Deng played his first season with Acadia Athletics last year, featuring in all eight matches, half of them as a starter. The youngster has featured regularly for Halifax City SC over the years, and – interestingly – is listed as a forward in many spots, though the Wanderers evidently like his defensive qualities.

Another Halifax local, midfielder Ayoub Al-Arabi made a good impression in his first Dalhousie Tigers season last year. Making eleven appearances and contributing three goals. He developed with Halifax City SC and was once selected to attend a Canada U-15 talent identification camp.

He represented Newfoundland and Labrador at the 2017 Canada Summer Games, and has laid claim to both the NLSA Senior Male Athlete of the Year award and the Johnson Insurance Challenge Cup MVP. All-told, the right-footed youngster is an intriguing prospect.

Standing at an imposing six-foot-two, midfielder Max Bodurtha marked his first season with Saint Francis Xavier University just last year. The Halifax City SC product made nine appearances in AUS action, most of which were starts. The 2003-born athlete now seeks an opportunity at a higher level.

Another Cape Breton Capers international coup, Blackpool-born Cameron Killbride has eyes for the CPL: he made himself eligible on the CPL-U SPORTS Draft, though only his teammate Jose Cunha would earn a professional contract.

While listed as a forward here, Kilbride typically plays as a midfielder or wingback for the Capers, where he posted one assist in eleven matches as the Capers brought a bronze medal back out east last year.

Freeman’s youth career saw him develop with Halifax City SC, where he played alongside other U-23 squad members such as Luke Berryman and Max Bodurtha.

Masimengo is a forward who has taken significant inspiration from the Halifax Wanderers as he carves out a life for himself in Canada. The forward arrived to New Brunswick as a refugee after his family fled the war in Congo, with his passion for soccer blossoming in Dieppe.

The former University of Moncton forward clocks in as one of the more experienced squad members. He had also played for the Moncton Codiac at Canada Soccer’s U-18 Cup in Vaughan several years ago, and prior to that won gold for Southeastern at the Jeux de l’Acadie in Saint John’s.

The six-foot-tall forward has spent time with the Vancouver Whitecaps Prospect Academy, and recently made a Tigers-to-Tigers switch: after a pandemic-impacted time in NCAA with the Memphis Tigers, he committed to a much closer-to-home Dalhousie Tigers squad for the upcoming season.

Parker-Christmas had made waves at the youth level after the Mi’kmaw youngster won the golden boot during the 2017 Toyota U-15 National Championship, with the Halifax City SC product bagging five goals at the Calgary-based competition. He repeated the golden boot feat again in 2019, too.

He isn’t the only Canadian footballer with roots to the Membertou First Nation, where Toronto FC’s Jahkeele Marshall-Rutty also has heritage.

The Halifax Wanderers U-23 team will be hosting two PLSQ sides this summer: they’ll play against CS St-Hubert next week, and CS Saint-Laurent the week after that. Both matches will take place at Wanderers Grounds, with tickets available here.

Fans who want to watch a replay of the Halifax Wanderers U-23 intra-squad friendly can catch it on YouTube.