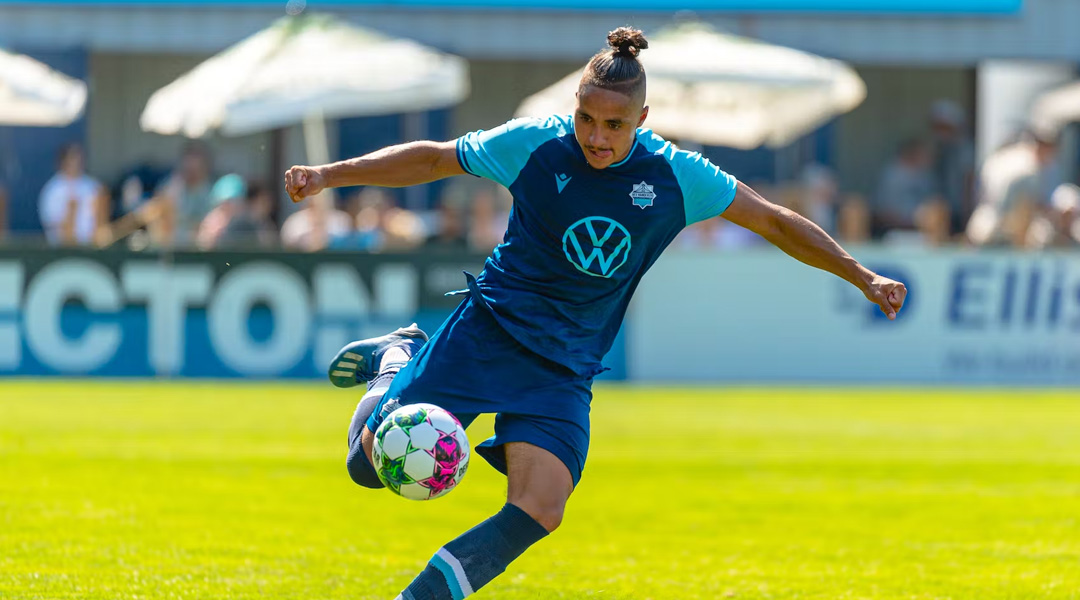 There was plenty of fanfare when the Halifax Wanderers confirmed the club’s young right back, Zachary Fernandez, was staying with the side after his impressive rookie campaign. He’s now signed a two-year deal with Halifax following a debut season that saw him lead the team in assists and establish himself as a starter in the professional ranks.

Fernandez says that the decision to commit to a new two-year contract that replaced his club option years was an absolute no-brainer.

“I think I made a good first year, but I’m far from my best. I think Halifax and the city knows that we were far from our best last year. I know the club has confidence in me, and I just want to express my talent out there on the field,” he says.

Fernandez has come a long way since arriving as a relative unknown from the PLSQ this spring. After impressing in preseason, he made his debut in an away match to York United and immediately locked himself in as a starting right-back for the CPL side. His rookie season saw him make 26 appearances, throughout which he led the team in assists with four.

“In my first game away, I was nervous. Then I got back to Halifax and with the support of the fans and my teammates who helped me to have a good season, it was great. It was a pleasure for me to enjoy what I like the most, and after that first match I didn’t doubt myself: I have the ability to play and I think Halifax, for me, is a great place to progress.”

The full-back states that he’s set his own areas of improvement both on the offensive and defensive end. For starters, he wants to be more clinical in the third phase. Despite leading the team in assists, he believes he has better quality in the final pass than what fans saw, and he’d like to polish his balance between going forward and defending.

It says a lot about his character that he can lead the Wanderers in chances created and assists, and still not be satisfied.

“I’m hard on myself. I always want to be better than the next day,” he says.

Anyone who watched the east coast side this year could see the joy Fernandez got when charging up the flank and taking on the opposition, and this comfort stems from the fact that he started out as striker and winger during his academy days with CF Montreal. They adopted him to a more defensive wingback role when he was 14, and he’s been making the position his own ever since. In fact, he says, he can be put in the middle of a back three, though obviously he’s most effective in his familiar full-back role.

There are just ten other players from the previous season who have been cleared to stay at Halifax, with new head coach Patrice Gheisar hard at work reshaping the team into what he hopes will identify as an attacking squad that keeps players on the front foot. It’s the second-biggest squad turnover in the team’s short history, and the first Fernandez has seen.

“It’s always sad to say goodbye to teammates, but I like this kind of action for the club take. It shows that they want to be competitive next year and they want to win the league. For me, this year is a statement year for Halifax because last year didn’t go as planned, and I think the supporters always come in and make so much noise. They deserve to have a competitive team.”

Fernandez has spoken with the new gaffer, who he says has taken the time to chat to each player on an individual basis. They have an attacking philosophy that matches well, and interestingly both of them had also competed against Wanderers before eventually landing with the team. Patrice led Vaughan Azzurri against the Wanderers in cup play back in 2019, while Fernandez played away to them with AS Blainville last year.

Both put up a good showing, but were bested by the professional opposition.

“You start the game out there one-nil down because the crowd there is so unbelievable,” reflects Fernandez. “That game was a surprise for me, it was my first time playing against a CPL team and the level was better than what I thought it would be. The stadium crowd was one of the things that told me I need to sign here.”

At just 21 years of age, Fernandez can’t put into words what it feels like to see an at-capacity stadium crowd cheering for him, and had a hard time believing that some fans had mounted an image of him along the stands as well.

“They always bring the love and the passion, and it helps us on the field,” he says.

There’s another right-back who’s career got a similar start featuring against the Wanderers before turning professional and impressing there, too. That’s none other than Alistair Johnston, who now plays for Celtic FC and someone who, it turns out, Fernandez had played with at the CF Montreal Academy.

“I made two preseason camps with the first team, so I played with him a bit. His journey, starting from the bottom, and now he is here. For me, I think everybody who wants to be at this level, I think they need to follow his journey, and that of all of the Canada team.”

For now, Fernandez is keen to show the footballing world what he’s capable of. He’s adamant that he has a lot more to show than what he put forth in what was already an impressive-season, and his personal ambitions match that, too.

“Maybe I dream a bit, but I want to double my number of assists, and win more defensive duels.”

With the 21-year-old having committed to a two-year deal at Wanderers Ground, there’ll be plenty of eyes seeing how the explosive right-back progresses out east. He hopes it’ll be a statement year for Halifax, who seek to return to playoffs for the first time since reaching the final in 2020.