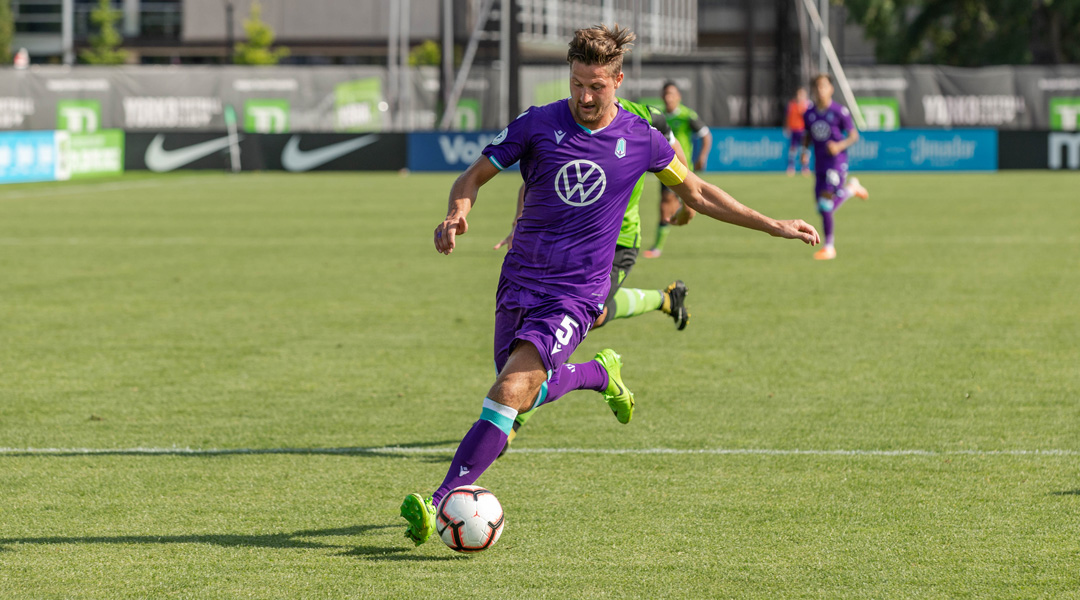 Despite a lengthy spell on the sidelines through injury, 28-year-old German defender Hendrik Starostzik has impressed during his time with Pacific FC: he scored the club’s first goal on his debut, he helps organize the club’s young defensive line, and he’s done a good job in the interim role of captain while Marcel de Jong recovers from an Achilles injury.

During a recent chat with Forbes about the club’s German influence, the veteran defender revealed that he believes that the level of play in the CPL is close to the third and fourth divisions of German football:

Hendrik has a solid basis for this comparison: prior to signing for Pacific FC, he plied his trade in the German third division with Hallescher FC. He had played in that division before with the Stuttgart Kickers, and had also accumulated a handful of second division appearances during a brief stint with Dynamo Dresden.


Whatever level the newly-formed league is playing at, it has certainly punched above its expected pay grade so far: spring season winners Cavalry FC made it to the semi-finals of the Canadian Championship, knocking out the Vancouver Whitecaps along the way. Meanwhile, Hamilton-based club Forge FC is representing the Canadian Premier League well in CONCACAF League action, recently recording a first leg win over reigning Honduran champions CD Olimpia.

Overall, the level of play that CPL clubs have shown on the pitch has impressed fans, pundits, and even coaches alike. In fact, Halifax Wanderers head coach Stephen Hart said the level of play sometimes surpasses the inaugural Major League Soccer season which took place in 1996.


Starostzik believes the burgeoning Canadian league’s level of play will continue to raise itself, and one of his big recommendations for improving play on the pitch is to have a less-congested fixture schedule:

The match calendar is too busy. We only play for seven months, and I think it should be eight. For example, in May, we had eight games. That is too much, especially when one considers the small squads, which are due to the salary cap. A longer schedule would allow more rest and improve the level.

In a league that operates coast-to-coast in Canada, it’s tough to find a balance: even after starting in late April, the first few games of the Canadian Premier League featured snow, rain, and plenty of adverse weather. It’s one of the reasons why Toronto FC typically starts off with several away games: though the MLS season starts in March, the month tends to be cold and wet one in the GTA. It’s even worse in other parts of Canada that Canadian Premier League clubs call home.


The congested schedule is made worse when one takes into account how much travelling takes place in a coast-to-coast league. When one looks for an example of travel fatigue in the CPL, they need to look no further than the away form of the Halifax Wanderers: the club has yet to win an away game in league play, and has to endure one of the longest domestic league away trips in the world. It’s home form, on the other hand, is fairly good.

CPL commissioner David Clanachan is hoping that some new expansion teams will establish themselves somewhat closer to the east coast, but so far he simply revealed he’d be happy with a single expansion club for 2020.


Pacific FC CEO Rob Friend extended on that during the recent Forbes interview, saying that to be sustainable as a league, the CPL must find the right ownership groups as opposed to the fastest. Expansion is coming, but it will take time. The same expectation can be placed on the league’s level of play.

With many of the league’s players going through their first-ever season as professional players, it’s likely that the level of play will continue to grow. Standout players like Tristan Borges, Marco Carducci, and Nico Pasquotti have certainly turned heads, indicating that the CPL is certainly mixing the right ingredients to eventually become an export League.


In the meantime, the Canadian Premier League is providing stability for domestic players who didn’t have a local professional environment that would give them time on the pitch to develop, which is something that the country didn’t previously have on a coast-to-coast level. The surprisingly high level of play has resulted in some great highlight reels of late, with goals that have featured on the likes of ESPN and the 433 Instagram, which has some 22 million followers.

If the Canadian Premier League can build upon the high level of play that it has shown in its first few months of action, it’ll be exciting to see both how much the league will grow over the next few years and how many Canadian players will benefit from it. We’re guessing that it’s going to be a lot.