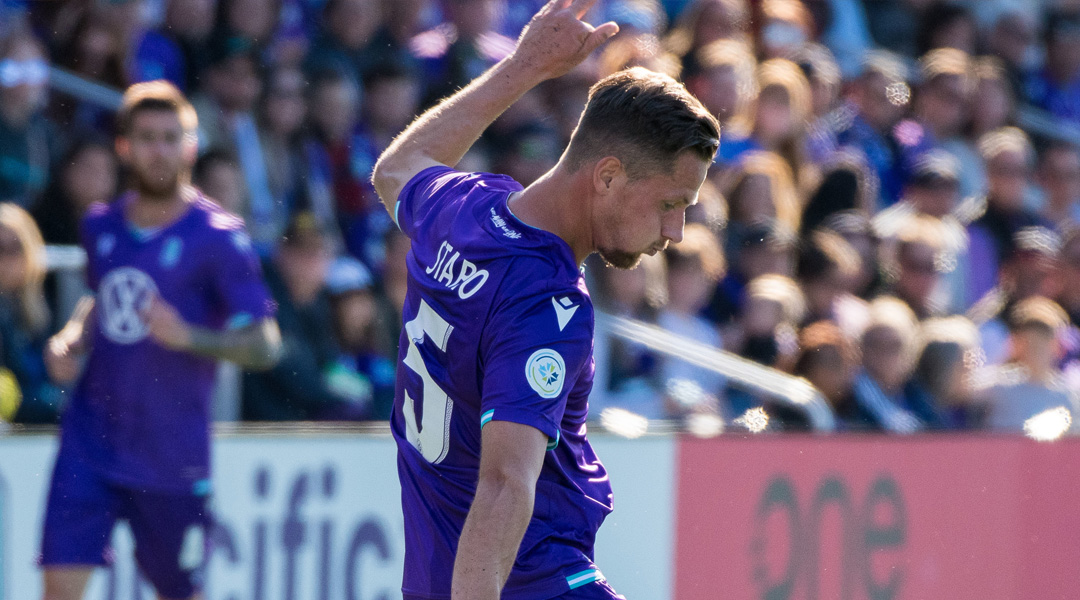 When Pacific FC signed Marcel de Jong, the 32-year-old left-back was brought in to take on a leadership role in a group of young players. The same ideology came into play with the signing of 28-year-old defender Hendrik Starostzik, who was signed by Pacific FC barely a week before de Jong went down in training with a season-ending Achilles injury.

Starostzik impressed on his debut for the Vancouver Isle side, scoring the game’s only goal in the 23rd minute and putting in a solid defensive shift for the PFC backline. After the game, Canadian Premier League stats-tracker SportslogIQ rated him a 96.25/100, but the 28-year-old defender has been a missing presence ever since: after picking up a knock to his foot during the game, the medical team has evidently discovered a longer-term injury that has kept Starosztik off the pitch for the last month-and-a-half.

This weekend, Starostzik was spotted returning to the pitch for individual training, and gave a thumbs up when CPL reporter Tyler Bennet asked if he had goosebumps. While there’ll still be some downtime before Hendrik makes his full return, it’s good to see him back in a pair of boots and putting in the recovery work as construction at Westhills Stadium continues:

The good news comes just a week after Marcel de Jong began some light solo work of his own, telling reporters that his recovery was ‘looking really good’. With Pacific FC maintaining the youngest back-line in the league – and conceding a league-high eleven goals in eight games as a result – fans will be hoping to see Starosztik back in a starting spot as soon as he’s cleared to play.

Of course, Pacific FC’s injury problems don’t end there: in the club’s midweek match against Valour FC, veteran target man Marcus Haber went down after an awkward landing and had to leave the game. He’s been sidelined previously in the spring season, and it’ll be touch-and-go to see if Haber returns to the lineup for tonight’s match against FC Edmonton. If he doesn’t, it could be another chance for young goalscorer Terran Campbell to impress – though he did look gassed by the end of his midweek performance.

Each club has faced a congested league schedule for the spring season, with lots of midweek games and plenty of action on turf surfaces. This schedule won’t get any better come the fall season in July, especially with three CPL clubs continuing on in Canadian Championship action.

In any event, it’s good to see Hendrik Starosztik progressing in his recovery. With only 21 players signed to the club’s roster – and one of them out for the season – the club could use all the depth it can get.