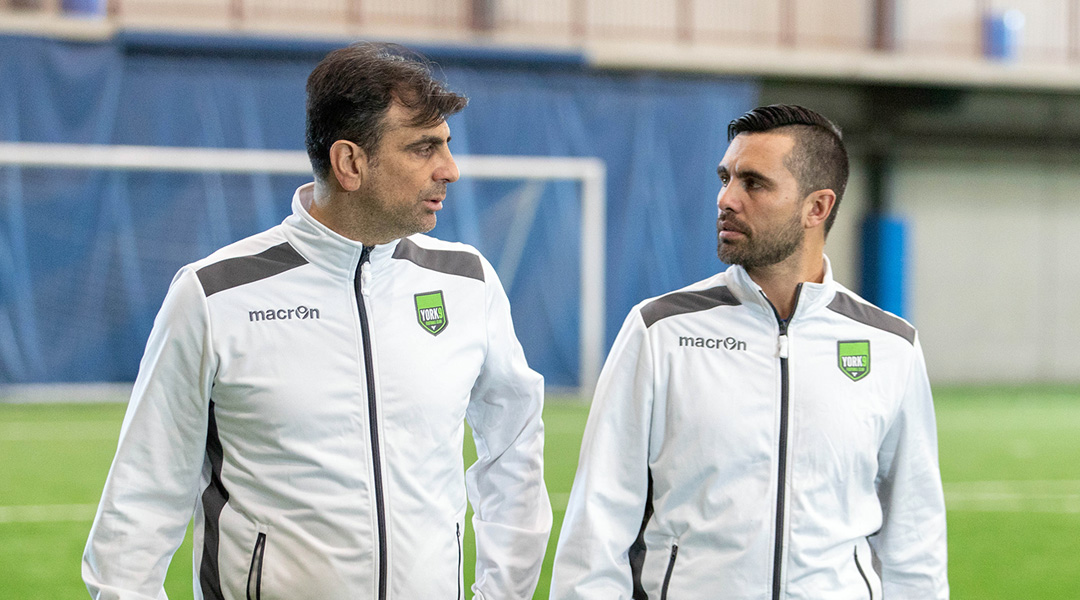 York9 FC assistant coach Carmine Isacco makes no bones about it: when it comes to the USL and the CPL, he feels that that the Canadian Premier League is the best platform for young domestic MLS loanees to develop their talents and grow as professionals. The Nine Stripes assistant coach touched on the subject of Ryan Telfer’s loan from Toronto FC during a recent episode of the Barn Burner podcast, and during the conversation he wasn’t afraid to take shots at the Ottawa Fury for not giving its three TFC loanees more time on the pitch.

Isacco played a key role in convincing Ryan Telfer to come to York9 FC instead of taking a loan option with the Ottawa Fury, though Toronto FC brass still opted to send Robert Boskovic, Aidan Daniels, and Shaan Hundal to the USL-based outfit. In Isacco’s view, this wasn’t the right move for their development since the trio of loanees aren’t getting much game time during their tenure with the USL club.

I may be pointing the finger at TFC when they chose to send some players to Ottawa rather than send them to CPL, but you look at Boskovic who was having a fantastic year in USL2 [in 2018], and hasn’t played a minute for Ottawa. You look at Aidan Daniels, who’s a fantastic young player with an amazing upside, and has played maybe five minutes a game. That’s important for us to look at, and if you’re developing an MLS player like an Aidan Daniels, you need to put him in an environment where he’s going to grow.

In actuality, Boskovic has made two appearances for Ottawa this season, though he only accumulated two minutes of gametime between them. Aidan Daniels has been slightly more active, clocking in 102 minutes across nine appearances. While they’re not completely unused, it’s fair to say that their time on the pitch has been fairly minimal. The only Fury player to have less appearances than Boskovic is Shaan Hundal, the other TFC loanee. He’s only made a sole five minute substitute appearance for the Ottawa Fury so far this season.


Ryan Telfer came into preseason with the biggest reputation out of all the TFC loanees, and has accumulated 1,558 minutes of game time for the York Region club across all competitions, scoring several big goals in the process (including the league’s first). He was recalled to Toronto FC for a sole match, getting a crucial assist and attributing his success to his time spent in the CPL.

At face value, it’s a stark contrast to his USL-loaned counterparts, and Isacco believes giving Telfer regular minutes on the pitch was integral to his growth as a professional athlete:

Ryan Telfer has grown, and Ryan Telfer has been given the opportunity not only to play, but to be a leader and to be looked upon, and that’s important. That’s important for the growth of a professional. All the experiences he’s having here are invaluable to his growth. I wish Bill Manning took a different look at it, at certain situations, and saw the value not only as a professional league – because we saw the values of a professional league, because to be honest we should have beaten Montreal, and Vancouver went in and they tied Calgary – so all those things are something we need to take a look at right now. The overall picture of professional soccer in Canada. The overall picture for our national team. We have to see how we all value eachother, and we all grow and develop. Ryan Telfer is the perfect prototype of what the CPL is in the development of a player.

There are currently three Canadian Premier League players on loan from MLS sides, and all of them are regular starters: Blake Smith for Pacific FC, Emery Welshman for Forge FC, and Ryan Telfer for York9 FC. These players are 28, 27, and 25 respectively, so it’s not exactly an apples-to-apples comparison to the likes of Boskovic (21), Daniels (20), and Hundal (20).

Still, the Canadian Premier League abides by roster rules that heavily encourage clubs to play young Canadians. Each club must have three domestic U-21 players to its roster, and these players must accumulate 1,000 minutes of gametime between the spring and fall seasons. The league also requires that at least six out of each club’s eleven starters be domestic players, which is a higher requirement than the Canadian Championship itself.


Isacco’s comments are likely to stoke the flame between some CPL and Ottawa Fury fans. The USL-based club was widely expected to be the eighth team to join the domestic league for its inaugural year, but snubbed the league in favour of staying in the USL. CONCACAF made moves to remove sanctioning for the Fury to play in the USL, but ultimately backed down – though it’s still unknown what will happen when the next season arrives.

York9 FC will be required to clear up roster space ahead of the 2020 season if the club is to meet the league’s required number of U-21 players, so it’ll be interesting to see if Jim Brennan can utilize his TFC connections to bring over any young loanees from the Reds next season. Now that the quality of play in the burgeoning league has proven to be at a good level, one has to think that it’ll be easier to convince Canadian MLS sides that the CPL is a good destination to help young players grow as professionals.

In any event, it’s clear that Carmine Isacco believes that young Canadian talent will get more playtime in the CPL compared to leagues like the USL, and if Pacific FC is any indication, he’s probably right.