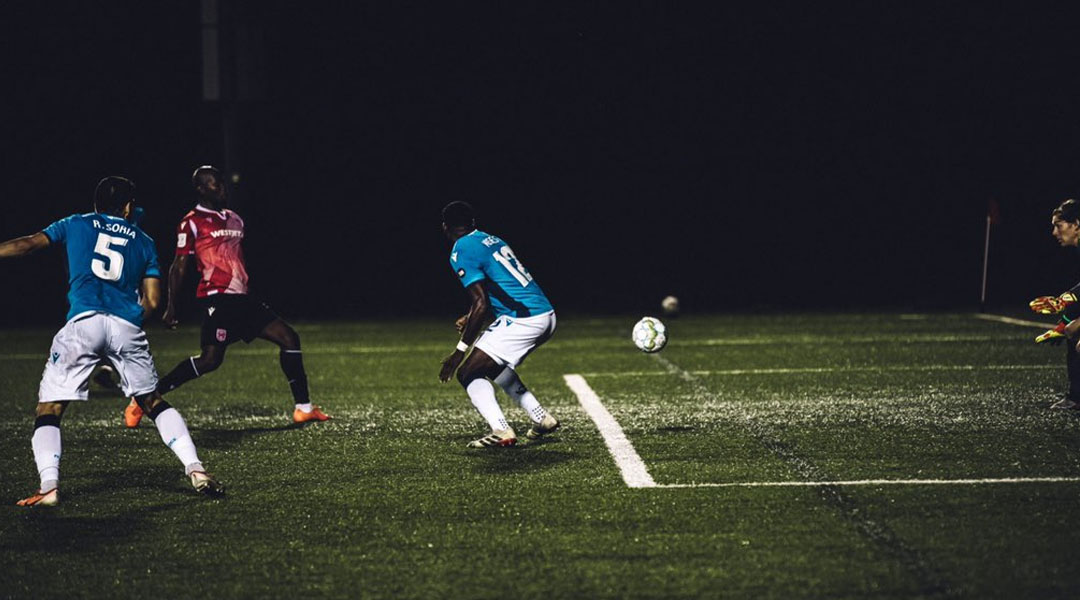 Cavalry FC marched to the top spot of the Canadian Premier League table with a comfortable two-nil win over ten-man FC Edmonton. The results puts them two points ahead of rival side Forge FC.

On the opposite flank, Tommy Wheeldon Jr. called on a three man backline of Boskovic, Trafford, and Zator to deal with FC Edmonton, with exciting newcomer Mohamed Farsi starting for the second match in a row. With a front three of Oliver Minatel, Jordan Brown, and Nico Pasquotti, the Calgary-based side certainly didn’t hold back from a strong roster selection for the only Al Classico matchup in the Island Games’ regular season.

The derby’s first big chance came with Nik Ledgerwood crossing in a quick ball for Pasquotti, with Kareem Moses – who scored an own goal four days ago – safely hitting the ball out for a corner to keep Cavalry FC without a shot attempt in the opening twenty minutes.

What looked to be a fairly tame game saw things spring to action at the end of the first half, with Zator pushing forward and distributing a tidy pass to Elliot Simmons. The good team buildup continued with Farsi collecting the ball on the right flank, curling an inwards cross to Oliver. The Brazilian quickly flicked it to Jordan Brown, who fired in the opening goal unmarked to tally up his sixth career Cavalry FC goal.

With FC Edmonton ending the first half without a shot, Paulus switched in Easton Ongaro for former NASL standout Hanson Boakai in an effort to change his club’s striking fortunes (or lack thereof).

Things would go from bad to worse for the Eddies in the forty-ninth minute with Terique Mohammed getting a straight red for a high challenge of Mohamed Farsi, with the Toronto FC loanee’s departure leaving FC Edmonton with it all to do.

Mohamed’s red card is the third one season overall at the Island Games, with Atletico Ottawa having seen both Vashon Neufville and Milovan Kapor getting two yellows (and thus, a red) apiece from two concurrent matches. Mohamed’s red card was the first straight red of the tournament, however.

A rare chance for the Eddies saw Easton Ongaro drop the proverbial ball, with Jordan Brown later sneaking up on Jeannot Esua to nearly double the Cavalry FC lead in the sixty-fifth. The resulting corner would see Nico Pasquotti fire a shot from outside the box, but the near-goal deflected off of substitute striker Marcus Haber.

The big man would find himself with another near-goal opportunity when a tricky set piece for Cavalry saw a rebounded Adekugbe effort nearly fall for the striker, but the resulting effort went wide.


Cavalry FC youngster Elliot Simmons found himself creating more opportunities late in the game, delivered a great cross out wide to Nico Pasquotti, who fired his shot high. The former Halifax Wanderers midfielder has had an impressive start for Cavalry FC so far, with the highly-touted youngster simply just not fitting into Stephen Hart’s system last year.

Connor James made the save of the game to deny Haber ten minutes from time, keeping his side in the game by kicking out to block a close range effort. Moments later, Zator would find himself denied off dangerous Cavalry FC set piece, too.


A driving run from Easton Ongaro would see FC Edmonton get a freekick from just outside the box, with commentator Gareth Wheeler calling the freekick a soft call after Ongaro appears to have simply fallen down while in possession. Regardless, the young striker fired well high of the net from the set piece.

Eddies fans then held their breath as youngster Antony Caceres weave into the box moments later, but the resulting ball to Ramon Soria was called for offside. At the other end of the pitch, Jordan Brown drove into the box and went down from an Essua challenge that will be the subject of some debate, with the 23-year-old English striker delivering both the first brace of the Island Games from the resulting penalty, and three points for his side.

Winless side FC Edmonton will now face Atletico Ottawa on Sunday, with both side’s seeing one player apiece suspended for the match. Later that evening, Cavalry FC will take on the Halifax Wanderers with a chance to solidify the side’s spot at the top of the table.

Both matches will be available live on OneSoccer and CHCH TV, with MEDIAPRO Canada also recently penning a deal with an Indian sports channel to see the CPL occupy the evening time slot overseas in India.

Both team’s respective supporters’ groups had previously decided that the Wildrose Cup would not be awarded to any club this year due to the regular season seeing the sides only match up once.