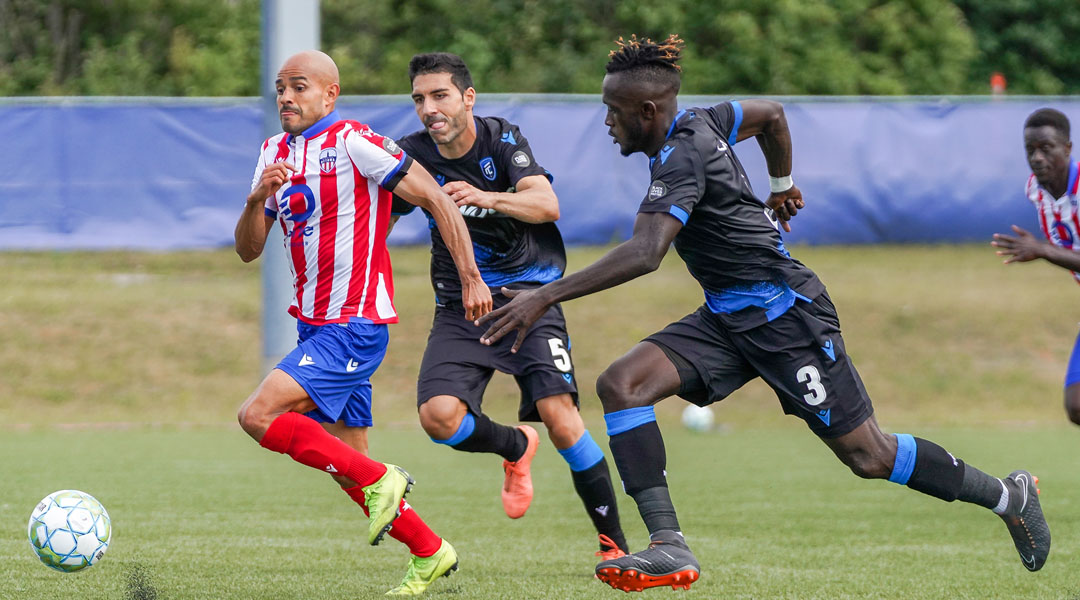 In the years past, a matchup between Edmonton and Ottawa hearkened to derby days in the NASL. In 2020, both FC Edmonton and Atletico Ottawa ply their trade in the Canadian Premier League, and their third match of the Island Games tournament saw them both needing to pick up points after difficult starts to the tournament.

The match saw Atletico Ottawa deliver the Canadian Premier League’s fastest-ever goal as Acuna recorded a brace but saw his side concede two late goals to the Eddies, who remain winless but finally broke their goalscoring streak just before the final whistle.

Atletico Ottawa head coach Mista was without centre-back Milovan Kapor due to suspension, but saw English left-back Vashon Neufville return at the same time. Malcolm Shaw continued to hold the starting striker position over Maksym Kowal, with Ben Fisk leading the midfield in a 4-1-4-1 formation that pushed high into the opposition half. Former Eddies man Ajay Khabra would start, too.

After a slow start to his time with FC Edmonton in the CPL, Jeff Paulus dropped former NASL standout Hanson Boakai to the bench and fielded a front three of Tomi Ameobi, Easton Ongario, and exciting newcomer Keven Aleman, who occupied a deeper number ten role in the middle this time around.

It was also no surprise to see Jeannot Esua earn another start, with the 2019 Eddies Player of the Year having put in two good performances for Paulus so far despite the side losing both games.

Atletico Ottawa handed the captain’s armband to Brandon John, who tragically lost his father in the days preceding the game.

It took only twenty-two seconds for Atletico Ottawa to shock the Eddies with an immediate goal, with a poor pass from Erik Zetterberg allowing Malcolm Shaw to sneak a pass through to veteran midfielder Francisco Javier Acuna, who slotted it beyond Connor James for his first goal of the campaign.

The goal is the fastest one in Canadian Premier League history, beating out a Marco Bustos goal for Valour FC that took place thirty seconds into a match against Forge FC last year.

FC Edmonton would show capabilities of returning fire after the disastrous start, with Allan Zebie procuring an ambitious volley effort that Nacho Zabal was able to handle as the ball dipped below the bar.

Moments later, Mohamed Kourouma almost bagged his second of the season for Atletico Ottawa, with his shot crashing off the crossbar after he received a cross from Vashon Neufville. The pair had connected in the club’s inaugural game to score the first goal in club history.

Acuna showed great quality to score the second brace of the Island Games tournament fifteen minutes in, driving into the box and rifling home a shot that drove beautifully into the side netting to double the Atletico Ottawa lead.

Thus far, both braces at The Island Games tournament (the first scored by Jordan Brown) have come against FC Edmonton, which is a stat Eddies fans will rue given he club’s defensive injuries.

An early knock to Kareem Moses would see the side forced to take off the Trinidadian five minutes after going 2-0 down, with depth option Sam Gardner coming on. With Amer Didic still out injured, the Eddies’ defensive back line is now stretched thin.

A confident Atletico Ottawa side would see the first half mostly take place in the opposition half, with the Eddies unable to provide much service to the likes of Tomi Ameobi and Easton Ongario, the latter of whom did have a long solo run that ended with the six-foot-six striker getting dispossessed.


The second half took place without significant momentum from either side for the majority of the game, with a battle in midfield seeing plenty of disruption to the run of play.

FC Edmonton were able to get bodies forward in the game’s dying minutes, with Vashon Neufville blocking a shot right near the Atletico net. The Eddies finally broke through in the eighty-seventh minute, with new addition Keven Aleman blasting home rebound to finally get FC Edmonton off the mark.

With the pressure of the first goal finally off, The Eddies rallied hard and made it happen: Hanson Boakai collected the ball and, surrounded by Atletico Ottawa players, got the ball to Antony Caceres who edged it up for Easton Ongaro. The striker was then able to awkwardly slice over the line from a tight angle: after two games without a goal, the Eddies were suddenly rampant in the game’s dying minutes.

The final whistle then sounded to end a game rifle with drama: for the second time in Atletico Ottawa history, the side dropped a 2-0 lead as FC Edmonton finally found its finishing touch. Both of the expansion side’s collapses came without Francisco Acuna on the pitch, which is food for thought for head coach Mista.

Both sides are now three games into the season without a win, with Atletico Ottawa on two points and FC Edmonton now on one.

The Eddies will regroup and hope that they can continue to find the net against the Halifax Wanderers on Wednesday evening.

Mista’s Atletico Ottawa side will now face tough tests against Cavalry FC and Forge FC as it’s next two matches, with the expansion side taking on Cavalry FC on Thursday evening.

Our sincere condolences go out to Brandon John and his family in this difficult time, along with the friends and family of Chris Kooy, the former Eddies captain who recently passed away.