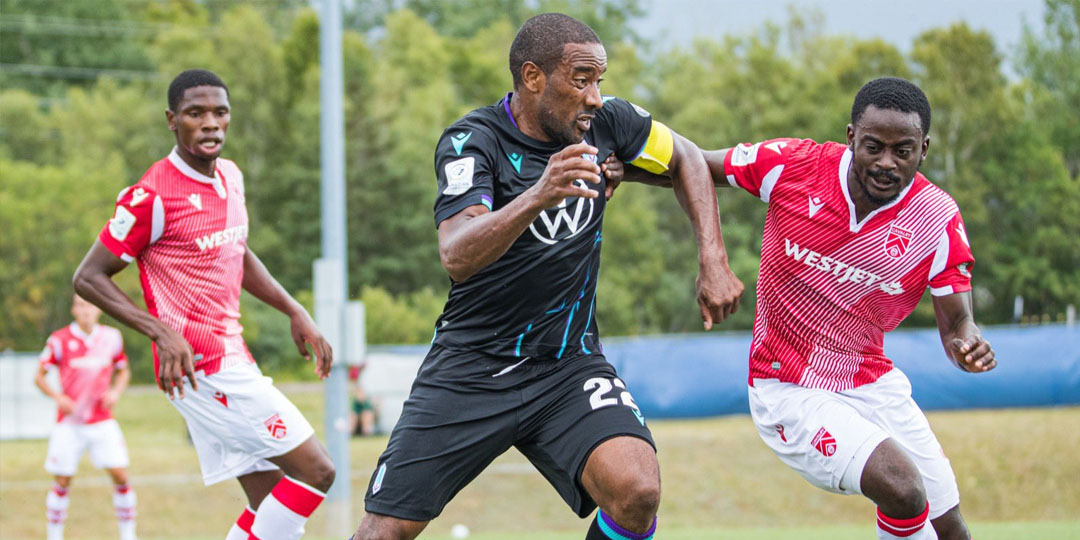 Cavalry FC entered its Sunday morning looking to set things right after falling to a surprise two-nil loss to Atletico Ottawa a few days ago, but the Alberta-based side found hard competition in Pacific FC: the west coast side dominated the first half, ultimately seeing out a two-one result to hand Cavalry FC its second loss in a row.

Cavalry FC still remains a the top of the table, but with the next four teams behind them all within three points reach (and with a game in hand), the Alberta-based side has it all to play for in its closing match this weekend.

Pacific FC rise to third in the table with its second win in a row, with the west coast side looking much more consistent over the 2019 edition of the squad.


Cavalry FC fielded a 3-4-3 with big target man Marcus Haber starting up front against his former club, flanked by the usual suspects in Oliver Minatel and Nico Pasquotti. Nathan Mavila returned on the left wing, with the defender still a surprise edition to the gold boot race. While Jordan Brown started on the bench, the expectation was always that the in-form English striker would come in later on in the game.

Pacific FC head coach Pa-Modou Kah elected to give both Callum Irving and Sean Young consecutive starts, with Alejandro Diaz once again starting up top with the Chung-Bustos combination continuing on the right. With Marcel de Jong being rested at the start, former Ottawa Fury man Jamar Dixon took the captain’s armband tonight.

The west coast side came out of the gate firing, with the Blasco-Diaz-Bustos press giving the Cavalry FC plenty of early problems.

A giveaway from Boskovic saw Jamar Dixon send Marco Bustos into the box, with the tricky midfielder getting the best of Trafford to cut inside and fire home a great left-footed effort to give the west coast side the lead.

Cavalry responded immediately when a long freekick met the head of Toronto FC II loanee Robert Boskovic, who looked to have made amends for his prior error before the goal was called back due to a narrow offside call.

Diaz would make his next chance count after a great run and cross from Victor Blasco saw Diaz get the ball right in front of the net, with the striker tapping home the ball to double the Pacific FC lead.

The Pacific FC dominance nearly paid off in the fourtieth minute, with Blasco once again providing a great ball for Bustos, who cut the ball back for Diaz. His shot went wide, but inadvertently ended up at the feet of Matthew Baldisimo, who fired a shot right into the crossbar from just about a foot out: it should have been 3-0.

Boskovic would see another set piece chance slip away when an Adekugbe freekick saw the six-foot-three defender get a head to the ball, but the effort went well wide.

Marcus Haber got the second half off to a promising start for Cavalry FC when he put in a good low ball, but it was too quick for Oliver to get a boot on. Zator would drive the ball forward minutes later, slotting a great ball in through the middle for Pasquotti. Callum Irving, however, was able to stop the opportunity from progressing.

Cavalry FC would get a golden opportunity just after that, with full-back Jordan Haynes bringing down former Eddies man Bruno Zebie with contact just outside of the box. The referee signaled for a penalty – perhaps incorrectly – with Nathan Mavila firing home his third goal of the Island Games to make the score 2-1.

His prior goals this year came via a penalty kick against Forge, and an audacious effort that caught Wanderers goalkeeper Jason Beaulieu off-guard.

As the rain started pouring down, Tommy Wheeldon Jr.’s side continued to press hard: a freekick opportunity forced a diving save from Irving, with substitute striker Jordan Brown calling him back into action again moments later. Cavalry FC were on the hunt for the equalizer.

Yet another Adekugbe freekick would see a lot of movement in the Pacific FC box, with the Tridents forced to concede a corner. The pause in play would see Peruvian forward Jair Cordova step onto the pitch for his first Cavalry FC appearance.

Final Pacific FC roster addition Josh Heard found himself with space on the right flank in the game’s dying minutes, but the illusive insurance goal wasn’t to be with his shot rising well high of the net.

Substitute Mohamed Farsi went down at the edge of the box in the final minute of added time, but the referee ended up handing him a yellow card as opposed to a last-gasp freekick opportunity.

Despite a hard-pushing Cavalry FC having the better of the second half, Pacific FC held on to secure a big two-one victory over the league leaders.


The result is the first time Cavalry FC has ever lost back-to-back matches in the regular season. The side did see back-to-back losses in the CPL Finals and in the semi-finals of last year’s Voyageurs Cup, but today marks the club’s first repeat losses in regular league play.

Cavalry FC now has just one game remaining in the first stage of the Island Games, with the Alberta-based side due to wrap up its regular season campaign against York9 FC at 3:00PM next Saturday. Cavalry FC has never lost to the Nine Stripes, finishing with a head-to-head record of four wins and one draw.

Third-placed Pacific FC now has two games remaining, with matches against lower-placed sides Atletico Ottawa and FC Edmonton set to determine if the west coast Canadian Premier League can accumulate enough points to stay in the top half of the league table and move on to the group stage.