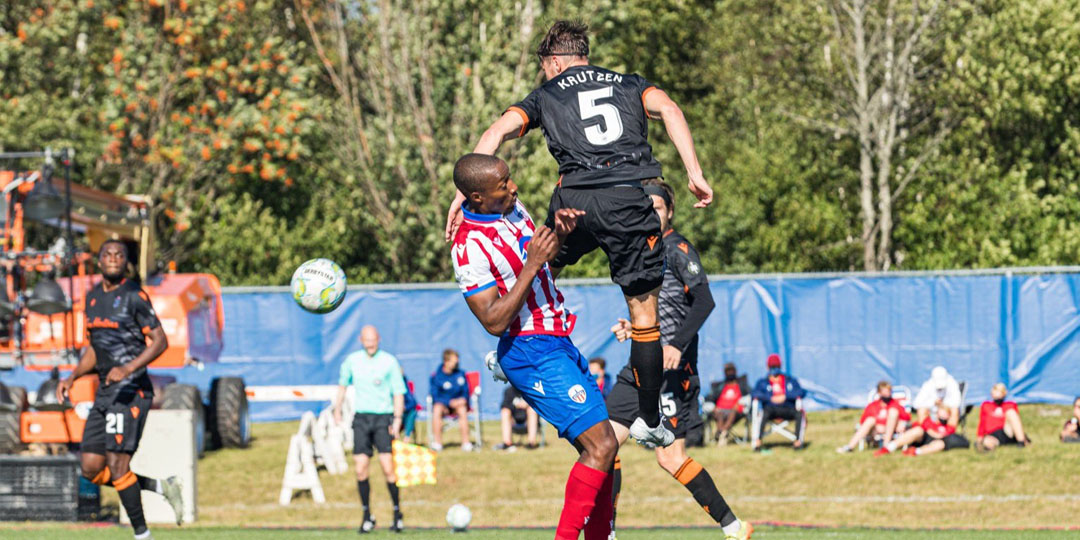 Forge FC found itself under pressure to fill the required domestic U-21 minutes, with only Monti Mohsen and Baj Maan available for the club’s second-last game of the regular season, although a recent tweet from Oliver Platt suggests that the club may be allowed to fill this requirement in the tournament’s second stage – contrary to what we were informed just a few days ago.

Forge FC head coach and technical director Bobby Smyrniotis started Mohsen up high on the left flank with Jordan Dunstan behind him. Full-back Maxim Tissot was shifted out to the middle (which he revealed might happen earlier), with Anthony Novak starting up top.

Atletico Ottawa fielded a familiar roster, with most of today’s starters having bested Cavalry FC just a few days ago. While Mista said his club has shown great growth at the bubble tournament, he remained wary of the threat that Forge FC was set to bring today.

Malcolm Shaw retained his starting spot, but impressive left-back Vashon Neufville was rested after picking up a hamstring aggravation. League1 Ontario standout Jarred Phillips stepped in to fill in for a tough test against Forge FC.


Twelve minutes into the game, Forge FC was forced to make an early adjustment with Kadell Thomas replacing Chris Nanco, who picked up a knock early on.

The game only truly got going after the first half hour, with Maxim Tissot sending in a curving freekick that missed the head of David Edgar and nearly found its way into the back corner.

Belgian defender Daniel Krutzen broke the deadlock in the thirty-sixth minute, with the hammers’ go-ahead goal coming courtesy of a set piece opportunity which saw Tissot deliver a high ball that dropped just above Zabal’s reach for Krutzen to head home.

One of the last touches of the first half saw Acuna slip in Atletico Ottawa captain Ben Fisk, who fired a well-placed shot to the right that saw Triston Henry stretched out to make the save.

The opening of the second half saw very little momentum build for either side. Plenty of stoppages in play were called from referee Carly Shaw-Maclaren, who was familiar with Forge FC after making her CPL first official debut in an earlier Island Games match between Forge and Edmonton.

Substitute Mo Babouli nearly injected a much-needed spark in the match with a well-struck effort from distance in the seventy-fifth minute, with the effort going on the wrong side of the post.

Mista would also hand Michel Djaozandry a debut near the end of the match, with the 22-year-old Trois-Rivieres full-back replacing Jarred Phillips.

A run from Monti Mohsen saw the youngster play a smart ball in for David Choiniere (who replaced Kadell Thomas, who was himself a substitute), but the Atletico Ottawa defense cleared to deny an insurance goal for the hammers.

At the end of regular time, David Choiniere – who has struck the killing blow for Forge FC before – was involved again as he collected a tidy pass from Sabak. He delivered for his side once again, dribbling through the Atletico Ottawa defense to slot in the second goal for the hammers!

While there was plenty of animosity shown between the two sides as the match wore on, no further goals were to come with Forge FC securing a fairly comfortable two-nil match that, truthfully, didn’t have much to it.


The win sees Forge FC jump to the top spot in the league table following Cavalry FC’s back-to-back losses, with the hammer now on an impressive eleven points after six games played. The Hamilton-based side will close out its regular season campaign against Valour FC next Saturday.

Mista’s Atletico Ottawa side could have seen a Pacific FC-esque jump in the league today, but instead the expansion side finds itself in seventh place after one win, two draws, and two losses at The Island Games.

An outside bet to make the postseason, Atletico Ottawa will face Pacific FC this Wednesday before closing the regular season against the Halifax Wanderers.