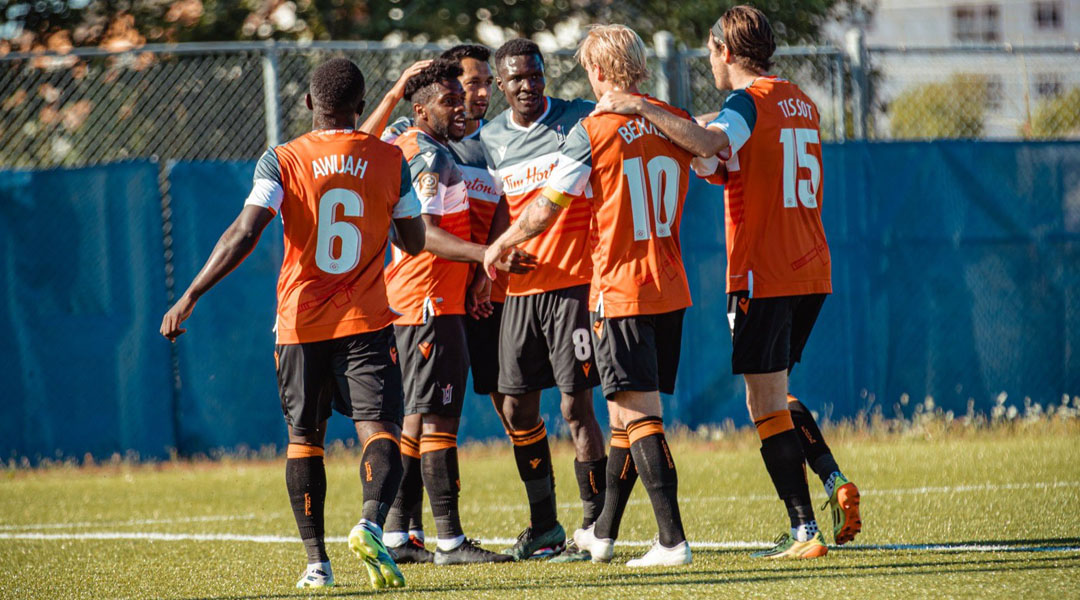 Reigning Canadian Premier League champions Forge FC top the the Island Games table thanks to an early goal from Chris Nanco and a last-gasp goal from team captain Kyle Bekker.

The match saw three goals in all, with an early goalkeeping error from Nolan Wirth giving the side an early lead, a set piece opportunity seeing Pacific FC draw level, and end-to-end action in added time resulting in heartbreak for Pacific FC.


Forge FC head coach and technical director Bobby Smyrniotis once again fielded a familiar backline, but saw his attacking options rotated with CPL-U SPORTS Draft pick Gabriel Balbinotti coming in. The 22-year-old signed a developmental contract just one week ahead of the tournament, with Chris Nanco and David Choiniere starting on the wing and causing early troubles for Pacific FC.

Smyrniotis also deployed Tissot as a defensive midfielder, with the former Ottawa Fury man having previously teased that the club had been testing him out in multiple positions.

Liga MX veteran Alejandro Diaz would get his first start up top for Pacific FC, with high-profile midfielder Marco Bustos being deployed on the right and team captain Marcel de Jong getting his second start in a row.

Balbinotti took just 36 seconds to fire his effort effort at Pacific FC goalkeeper Nolan Wirth, with his initial effort going wide. Just under a minute later, the fast start would continue with Forge seeing a good low cross from Choiniere coming just inches from finding Nanco at the end of it.

After some back and forth action, a sloppy pass from Nolan Wirth delivered possession back to Nanco, who quickly ran into the box to fire a well-placed shot beyond the flustered goalkeeper to give Forge FC an early lead:

Just three minutes later, Balbinotti should have doubled the side’s lead after Choiniere sent in a quick low cross from a quick counter, with the Montreal-born striker miss-timing his slide just in front of the goal line.

Pacific FC proved why it’s not a side to be overlooked, however, with the squad drawing level in the twenty-sixth minute from a set piece opportunity. A poor punch from Henry saw Marco Bustos fire an effort which saw the ball rebound to former Ottawa Fury men Thomas Meilleur-Giguere and Jamar Dixon, with the veteran defender scoring from close range to open his account with the west coast club.

That equalizer would be the second time Pacific FC have drawn level through a set piece opportunity, with the side having rescued a point against York9 FC from a corner last week.

Forge FC would respond with some close chances from Cisse and Balbinotti, with Wirth being kept quite busy in the opening forty-five minutes.

The second half kicked off to a slow start, with Forge FC finding themselves repeatedly offside and a Diaz – Marco Bustos linkup creating a good opportunity, though the west coast side’s best newcomer couldn’t finish the chance.


Victor Blasco had a second half to forget, missing three opportunities from good spots, the most egregious of which came in the seventy-third minute.

A wonderful freekick from Daniel Krutzen caught the Pacific FC defense off guard, with the curling effort clanging off the post with the score still locked at one-one.

Six minutes of added time saw an injury concern arrive for David Edgar, but he was able to return to the pitch.

Pacific FC almost pinched all three points at the death, with Terran Campbell striking the crossbar (yes, again). Forge quickly got the ball up the pitch, and Molham Babouli driving down the pitch to the right of the net. He cut the ball back to team captain Kyle Bekker, who fired home the cross to steal all three points for the hammer and secure Forge FC’s spot at the top of the table:

For the proverbial icing on the cake, the goal means that the Forge FC team captain is leading the club’s scoring chart after having scored against Cavalry FC, too.

The Hamilton-based side now tops the table with eight points after four games played, and will take on geographic rivals York9 FC this Wednesday. With the Forge FC engine seemingly operating on full-steam, it’ll be a tough test for the rival side.

Pacific FC will have a few days to recover from the last-gasp defeat before taking on Valour FC this Tuesday. With the west coast side finding itself with just two points after three games played, this midweek match is starting to look like a must-win result for head coach Pa-Modou Kah.