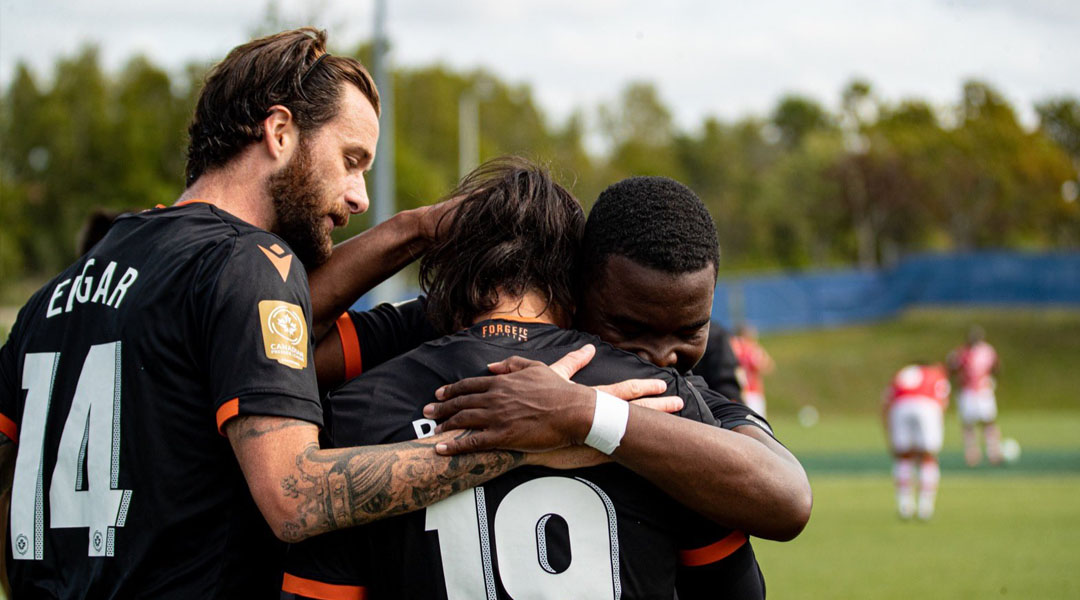 The second-last match of the Canadian Premier League group stage saw the league’s best rivalry produce another heated match between two teams that fought for every inch on the pinch.

A wonder goal from Mo Babouli was enough to secure both a win and a spot in the CPL Final for reigning champions Forge FC, who dispatched rival side Cavalry FC in a hard-fought one-nil victory today.

For the second time in just as many years, Tommy Wheeldon Jr.’s side finds itself without a North Star Shield after finishing top of the regular season, with the CPL Final now due to be contested between Forge FC and the Halifax Wanderers.

For today’s match, Forge gaffer Bobby Smyrniotis gave former TFC striker Molham Babouli his first start of the group stage, with Marcel Zajac on the left and the ever-versatile Jonathan Grant on the right. Belgian midfielder Paolo Sabak also returned to the starting lineup behind the trio.

Cavalry FC had confirmed that both Pasquotti and Camargo were out for the season, joining Oliver Minatel (long-term leg injury) and Nik Ledgerwood (day-to-day decision) on an ever-growing injury list. To keep his front three going, Wheeldon Jr. fielded Brown, Haber, and impressive youngster Farsi, though notably the side had zero midfielders left on the bench for of the match. A suspension to Jay Wheeldon lowered the selection options even further for the Alberta-based side.

Despite that, Cavalry FC got off to the better start, spending most of the game’s opening minutes in the Forge half and forcing a few fouls in the process. The first big chance came with a strong out-of-the-box effort from Simmons, with Edgar blocking the long range shot to concede a corner.

Marcus Haber ran free along the right flank in the twenty-first minute to deliver a great low cross into the middle of the box, but Triston Henry was able to collect it before it found a Cavalry boot.

Against the run of play, the reigning champions struck first blood after a fast pass from Bekker allowed Babouli to break free, with the striker firing a clever chipped effort that struck the crossbar and dropped beyond the line to give Forge FC the lead!

The Hamilton-based side had a good opportunity to double the lead in the final minutes of the first half, with Zajac finding space in the box before firing an awful effort both high and wide.

The side almost rued the missed chance moments later, with Jordan Brown coming in close to Henry and nearly getting his feet to an effort that would have equalized for Cavalry FC in its must-win match.

The second half saw a hard-fought match continue between the sides, with Tommy Wheeldon Jr. making some predictably attack-minded changes in the 62nd minute.

Smyrniotis made a few attacking changes of his own, bringing on David Choiniere – who struck the killing blow against the side in the CPL Finals last year – on in the sixty-seventh minute to replace Grant on the right wing.

A set piece opportunity for Cavalry in the seventieth minute saw Nathan Mavila hit in a great ball for Robert Boskovic, who saw his headed effort go agonizingly wide of the post.

The Alberta-based side continued to press, with one attack a minute later leading to a penalty shout that the referee quickly waved away, with Henry forced to deal with an awkward ball just seconds after that as Jordan Brown competed for possession.

Some late game magic from David Choiniere saw the former Montreal Impact player dance into the Cavalry FC box beyond Mavila, though the chance ended with his shot going wide.

Despite more late game pressure from Cavalry, Triston Henry would retain his clean sheet (a league-leading fourth of the season) as Forge FC sought out a hard-fought one-nil victory to secure its passage to the final game of the tournament.


Forge FC will now face the Halifax Wanderers in the CPL Final this September 19, with the reigning champions looking ready to defend their title against Stephen Hart’s much-transformed side.

Tommy Wheeldon Jr. will be left wondering what could have been as his side now exits the group stage after sustaining the worst injury problems of the tournament, with the regular season winners once again outdone at the last by their Hamilton-based rivals.