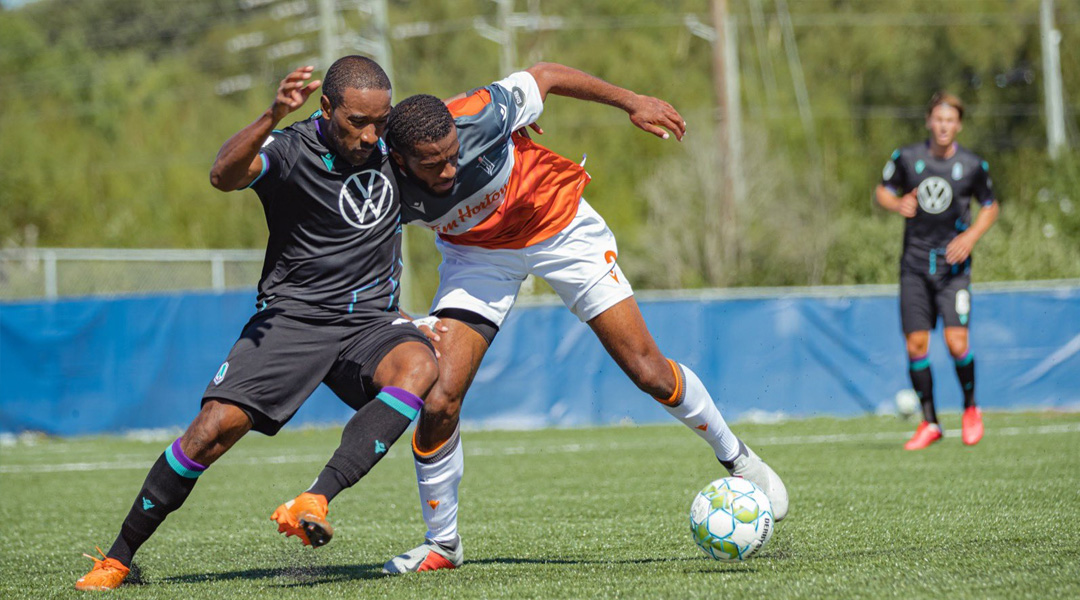 A bright Saturday afternoon Group Stage match between Forge FC and Pacific FC saw the reigning champions sneak one foot into the door of the CPL Final with a two-nil win over Pacific FC.

Goals from Daniel Krutzen and Anthony Novak secured the result for the Bobby Symrniotis’ Hamilton-based team, who entered the match knowing they were lucky to have earned a draw against the Halifax Wanderers a few days ago.

While Pacific FC head coach Pa-Modou Kah didn’t want to call the match a must-win for his side following their defeat against Cavalry FC last week, the west coast team went into the match knowing that securing a result would be a requirement if the side was going to secure a first-ever berth in the CPL Final.

Kah fielding a familiar-looking attacking line that saw Mexican striker Alejandro Diaz start ahead of a strong midfield featuring Blasco, Young, Dixon, and potential CPL MVP Marco Bustos. Impressive defender Kadin Chung was on the right, with veteran Marcel de Jong on the opposite flank and Thomas Meilleur-Giguere pairing up with Lukas MacNaughton in the middle after Abdou Samake found himself dropped following a weak performance against Cavalry FC.

Forge FC gaffer Bobby Smyrniotis shuffled his line-up, handing Jonathan Grant his second appearance at The Island Games up top on the left, a far distance from his last appearance in the Island Games opener as a right-back. The attacking rotation continued with Gabriel Balbinotti named as the starting striker and David Choiniere slotting in on the right side, with versatile Forge man Elimane Cisse replacing Paolo Sabak in midfield.


The opening minutes of the match proved to start slowly for both sides, with the match taking a good twenty minutes or so to open up as both teams sought their footing – though when it opened up, the flowing attacking game produced no shortage of chances for both sides.

Blasco nearly bagged himself an Olympico in the twenty-third minute, but Henry proved himself up to keeping the scores level as the ball dipped low on the near-side post. It was almost a like-for-like reproduction of the side’s last-gasp goal against York9 FC, though this time the ball didn’t find its way into the net.

U-SPORTS standout Gabriel Balbinotti attempted a cheeky backheel in the twenty-eighth minute to cap off a chance which started with a good press from team captain Kyle Bekker, who has been linked with the Vancouver Whitecaps. The pace of the cross, however, made it easy for Callum Irving to read and react accordingly.

Moments later, impressive Islander Sean Young found himself closing in on Triston Henry before an offside call saw his chance dismissed early. It’s been a great campaign for the 19-year-old, who now has eight appearances at The Island Games in his debut season as a professional.

A great ball from Bekker to Grant saw the 26-year-old break into the box, with Chung bringing Grant down to concede a penalty and collect a yellow. Pacific FC head coach Pa-Modou Kah will need to look at his side’s defensive play this offseason, with the Tridents having now conceded six penalties in just nine games.

Krutzen stepped up to take Forge’s third penalty of the tournament, continuing the side’s perfect penalty kick record with a strong finish to the left to hand the hammers a one goal lead. The side converted from the penalty spot last week, too.

A wonderful break moments later saw Jamar Dixon release Blasco on the left, with the Spaniard coming in close to release a ball across the box that found no PFC player waiting for it.

At the stroke of half time Alejandro Diaz fired a shot (or, perhaps, a cross) from just inside the box that rolled just beyond the far post after taking a deflection. Pacific FC should have bagged one moments later when Blasco took advantage of an error from Samuel to cut inside the box and fire a close effort, but his right-footed shot was parried away well by Henry.

The resulting corner saw the west coast side nearly score its third goal in just as many minutes, with a close headed effort from MacNaughton being fired right at Henry with Krutzen quick go clear away the rebound. Despite the last-gasp first half opportunities for Pacific FC, it was the reigning champions who went into the break with the goal advantage.

A slow second half would eventually break away with Kadell Thomas putting forth a nice pass to Anthony Novak, who did well to fire a left-footed shot for his second goal of the tournament to double the Forge FC lead.

With their backs against the wall, Pacific FC now had it all to do in order to save the season – something they left until the last moment in the first round against FC Edmonton to do.

Maxim Tissot made a good run right after being substituted on after the drinks break, but saw his cross blocked out by Meilleur-Giguere in the seventy-eighth minute. While Pacific FC tried to make moves happen through playmaker Marco Bustos, it was the hammer who forced possession into PFC’s half of the pitch for the majority of the second half.

At the final whistle, it was Forge FC who collected a big three points as Pacific FC went winless in its second group stage matchup.


Forge FC will close out the round robin group stage with a crucial match against rival side Cavalry FC this Tuesday, with both teams still in contention to re-create the 2019 CPL Finals at The Island Games this year.

Pacific FC now finds itself mathematically eliminated with today’s loss, and will close out the group stage with a coast-to-coast clash against the Halifax Wanderers on Tuesday.