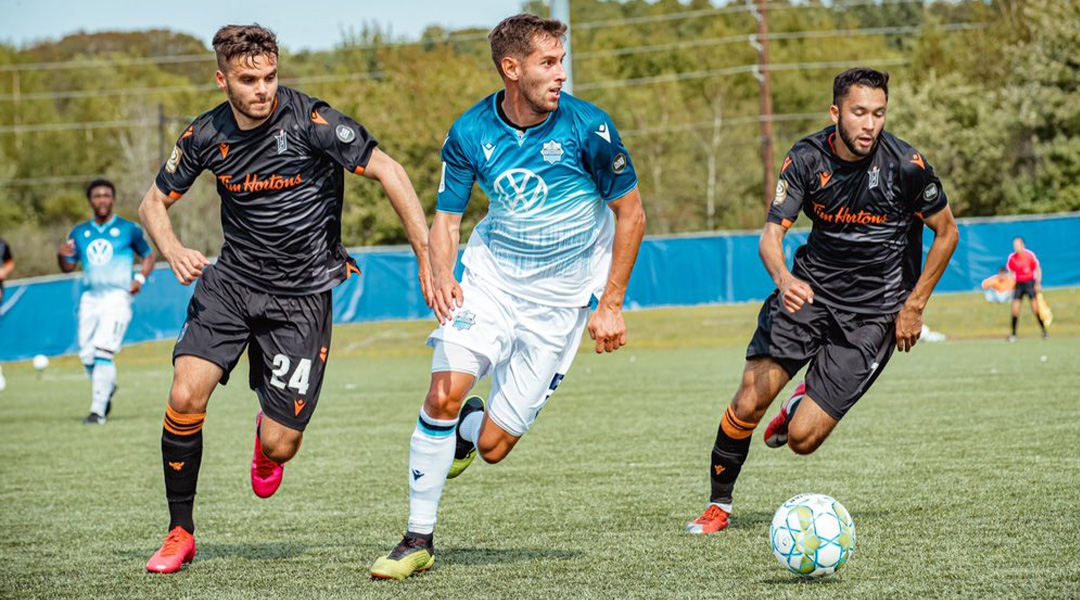 The Halifax Wanderers squad that took to the pitch in Charlottetown tonight looked a night and day difference to the squad that finished last in the fall campaign last year.

Having finished second in the regular season of the Island Games, the club looked the more threatening side for most of the opening group stage match against Forge FC as both clubs battled to a one-one draw.

Hart called upon local goalkeeper Christian Oxner to start the match, with the 24-year-old once again the de facto starting choice after Jason Beaulieu was given a few starts in the beginning of the campaign.

A strong Wanderers midfield was bolstered by the return of Brazilian attacker Joao Morelli following his two match suspension, with golden boot leader Akeem Garcia getting the expected start in the pole attacking position.

Forge FC gaffer Bobby Smyrniotis continued to rotate his attacking options, with Maxim Tissot starting up left with Novak in the middle and Choiniere on the right. With the club’s U-21 commitment now sorted, both of the side’s healthy youngsters returned to the bench ahead of the opening group stage matchup.

The Wanderers opened up with a confident high press that nearly paid off immediately, with Trinidad and Tobago international Akeem Garcia collecting an errant back passing and firing a shot just wide of the post.

Just four minutes into the match, that same press would see Morelli force the ball off of Achinioti-Jonsson, slotting in a nice through ball for Garcia to bag his fifth goal of the tournament and give the Wanderers the first goal of the group stage!

Remarkably, Garcia’s twelfth goal for the Wanderers was his fifth against Forge FC, with the striker having last put one beyond Henry to equalize for the Wanderers in their first round draw just a few weeks ago.

Former Montreal Impact youngster Daniel Kinumbe nearly the doubled the lead in the twenty-first minute, sneaking beyond Edgar and firing a shot within the box that was promptly blocked by Achinioti-Jonsson.

The Halifax Wanderers dominance would also see Alex De Carolis break clear into the left side of the box, though his cross rebounded back off of him and out for a goal kick.

Belgian midfielder Paolo Sabak lost his temper a few minutes from time, throwing a ball off the pitch and earning a yellow card for his physical dissent. It was a fitting prelude to the heated nature of the second half to come.

Moments later, David Choiniere would nearly make good of Forge’s best opportunity of the first half with a sharp shot from outside the box which rolled inches wide of the post beyond a diving Christian Oxner.

As the first half concluded, it was clear that Forge FC was having difficulty countering the Wanderers’ press, with the Hamilton-based side looking less dangerous when on the ball than their east coast counterparts – though the last few minutes of the first half did show promise for them.

The second half would hand Forge FC a golden opportunity to equalize when Jake Ruby was harshly penalized for a handball in the box, with his arm having been struck while tucked in to his torso. Sabak stepped up for his second penalty of the tournament, firing beyond Oxner to equalize for the Hamilton-based side.

The official’s call was near-universally criticized by pundits, fans, and even some official CPL figures alike, with the general consensus being that the handball call was a big mistake.

Morelli nearly capitalized on another defensive turnover moments later, but his run in to the box was cut short by a well-time challenge.

Substitute Gabriel Balbinotti nearly saw a cheeky chip from the right side of the box dip into the the net beyond Oxner – who had rushed out – but the potential late match winner went wide of the far post.

The second half saw Forge FC look more dangerous on the counter than it had in the first, though neither side would find the back of the net with the first match of the group stage ending in a draw.

Prior to that, the group stage action will continue tonight with a match between Cavalry FC and Pacific FC in the evening.