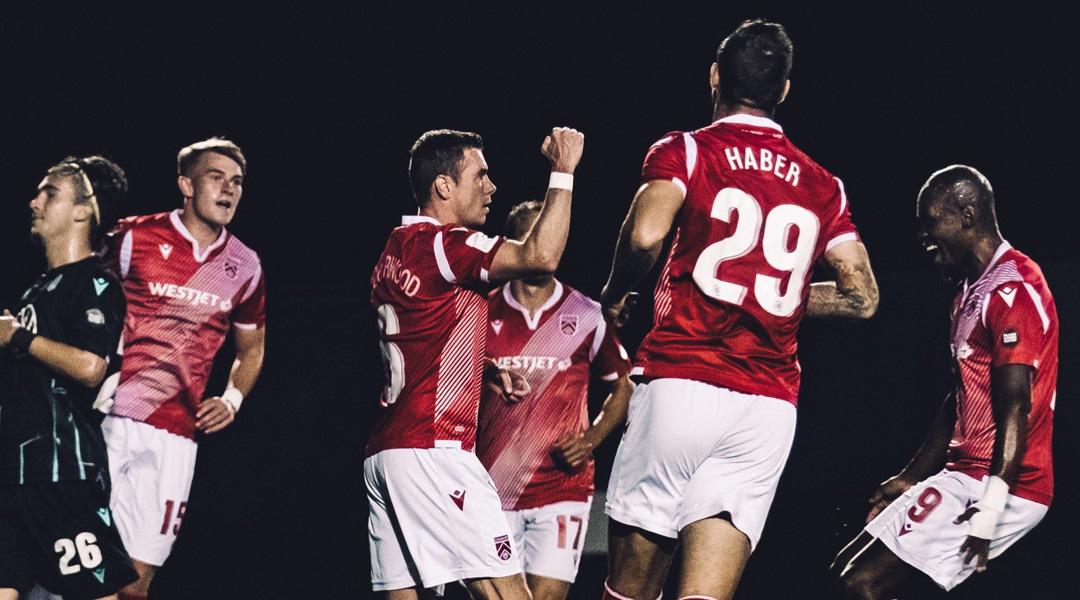 If today’s earlier match between the Halifax Wanderers and Forge FC saw a big wave rise for new title contenders, Cavalry FC’s match against Pacific FC tonight was all about restoring the status quo: Tommy Wheeldon Jr.’s side absolutely dominated the match, comfortably dealing a 3-1 defeat to Pa-Modou Kah’s west coast side.

Goals from Legerwood, Adekugbe, and Farsi saw the side jump to the top of the Group Stage after the first matchday of the round robin tournament, putting last year’s CPL runners-up in the pole position as they seek to qualify for the second-ever CPL Final.

With Brazilian forward Oliver Minatel out with a long term leg injury, Tommy Wheeldon Jr. called upon a front three of Pasquotti, Haber, and Brown to do the work up top with team captain Nik Ledgerwood leading from midfield.

Pacific FC head coach Pa-Modou Kah once again named a front three consisting of Blasco, Diaz, and Bustos, with in-form defender Kadin Chung resuming his role on the right flank and Abdou Samake earning his second start in the defense.


Cavalry FC set the tone of the match with a high, tight press that immediately gave the Pacific FC backline all kinds of problems: it took just five minutes for the game’s first big chance, with Mavila bringing in a ball that Nico Pasquotti squandered by blasting a shot off-target.

Pasquotti would find himself involved again a few minutes later, heading a smart lead ball into the path of Marcus Haber, though the former Pacific FC man fired his shot right above Irving’s head with the goalkeeper forcing the ball out for a corner.

The ninth minute saw the ever-involved Pasquotti dance across the Pacific FC box, but the 24-year-old Lethbridge native waited too long to release his pass. When the ball came back to him, his shot was immediately blocked by a PFC defense that had time to react.

The high tempo action from Cavalry paid off when Abdou Samake – who had a great match against FC Edmonton last week – brought down Mohamed Farsi in the box after going to the ground. Nik Ledgerwood stepped up to take the opportunity, firing his shot to the top right while sending Irving the wrong way to give Tommy Wheeldon Jr.’s side a well-deserved lead in the fifteenth minute.

The midfielder’s day would end early with Pasquotti going down during the drink break after having struggled with a leg injury throughout the match, with the 24-year-old year old stepping off the pitch in the thirty-first minute to be replaced by former Eddies man Bruno Zebie.

The first half dominance for Cavalry FC continued when Brown got through the defensive line after a bad chested ball from Alessandro Hojabrpour, with Brown then rounding Irving only for his shot to be cleared before it crossed over the line by a hastily-retreated Hojabrpour.

Bustos nearly scored an absolute wondergoal in the fourty-third minute with a spinning volley backheel from outside of the box that flew just wide of the net. Had the ball gone in, there would have been controversy abound given that the play was incorrectly called offside.

The second half saw the Alberta dominance continue with substitute Elijah Adekugbe – who replaced Ledgerwood at half time – making a wonderful bursting run into the PFC box to pick up a loose ball and fire home a smash-and-grab hot start for the Alberta-based team.

Pacific FC responded well to earn two straight set pieces, though today’s theme of referee controvesy continued with the second of those being an incorrect call in Pacific FC’s favour. In any event, the west coast side saw the corner piece incidentally fly in off the back of Dominick Zator to bring the west coast side within striking distance of an equalizer.

A smart layoff from Bustos saw Alejandro Diaz call Carducci into action in the fifty-seventh minute, with the goalkeeper making a great save to deny the Mexican forward an equalizer.

Farsi did well to make space for himself on the right flank a few minutes later, cutting inside the box and firing a shot that was awkwardly deflected away by Irving, with the chance ultimately ending there.

The impressive full-back shocked Pacific FC after Haynes lost possession following an awkward distribution from Irving. The impressive Cavalry FC newcomer burst into the box and fired an absolute rocket in off the post to give the Alberta-based side a well-deserved insurance goal, which was one of the best of the tournament to boot:

Minutes later, Brown made space in the box and fired a hot shot from a similar angle, though this time it flew wide of the post. In the game’s dying minutes, the Cavalry party should have continued with Zator firing a great through ball for Bruno Zebie, who miss-cued his tap in to send the ball wide.

Despite the last-gasp miss, it was all smiles for Cavalry FC as the side finished three-one victors over Pacific FC, with Tommy Wheeldon Jr.’s side in control for the full duration of the evening match in Charlottetown. With three points on the board, it’s a dream start for the Alberta-based side’s postseason progress.

Pa-Modou Kah faces a quick turnaround time to get the Tridents firing again in time for Saturday, with the club due to take on reinging champions Forge FC this Saturday. Tommy Wheeldon Jr.’s side will then face the Halifax Wanderers a few hours after that to round out the second matchday of all-important group stage action.