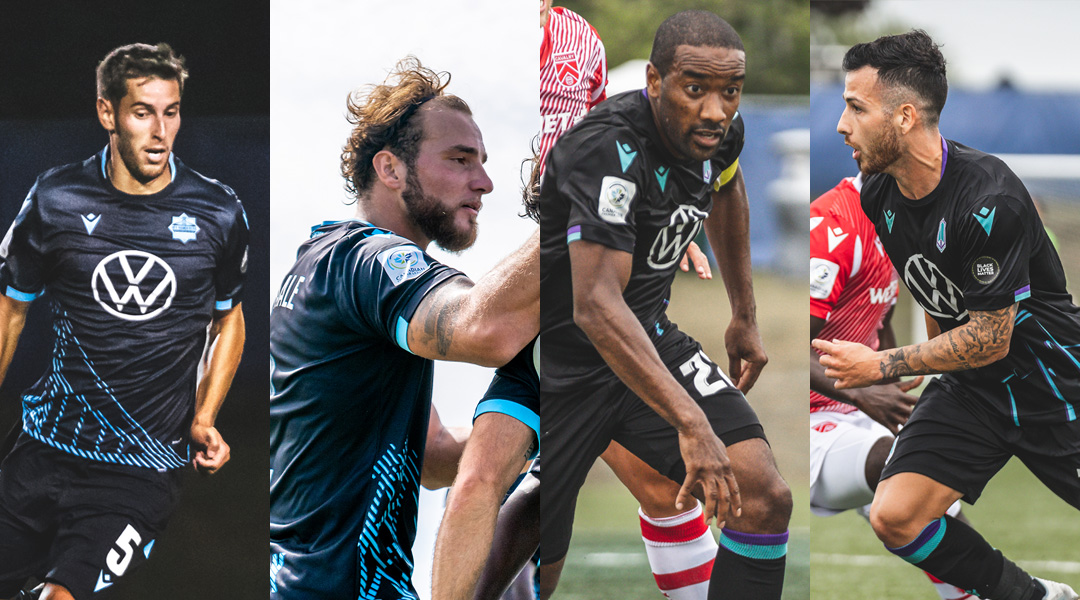 With The Island Games now entering its group stage, players have been battle-tested out on the turf field in Charlottetown through up to seven matches by now. With the league table showing plenty of parity, it hasn’t been an easy path for any of the four remaining teams – so it’s no surprise that there are currently four different players sitting on the precipice of a suspension via yellow card accumulation in the group stage.

Without further ado, let’s take a look at the four players who are one caution away from missing a crucial postseason match. Forge FC and Cavalry FC can sit this one out, as all four athletes hail from either the west coast or the east coast this time around:

The high-profile Pacific FC talisman has been a standout player in Charlottetown, with the 24-year-old midfielder racking up three left-footed goals and one assist in just seven games for the west coast side. Bustos is confident on the ball, taking on multiple defenders and drawing others near him to create space elsewhere, too.

With three group stage matches ready to go, Bustos will miss a postseason game if he picks up a yellow in any of the next two games against Cavalry or Forge. Given that he has the most touches on the ball out of any attacking PFC player, head coach Pa-Modou Kah will be hard-pressed to find someone to fill his shoes if he’s given a suspension – though the likes of Dixon, Young, and Blasco have proven capable in midfield, with Josh Heard also a possibility after his performance against FC Edmonton, too.

Still, one thing is clear after the first seven games: there’s no midfielder in the league right now that stacks up to Bustos. Pacific FC need him on the pitch.

The former Valour FC midfielder has featured for the Wanderers in every regular season game of The Island Games so far, but a somewhat unnecessary yellow collected against Atletico Ottawa last week means that the Quebec-born midfielder must now be careful in the group stage.

The Wanderers have had several standout performances from new players this year, so Beland-Goyette has found itself a bit lost in the noise from that. Still, he’s a sturdy centre-midfielder capable of fighting for the ball (where it’s easy to collect yellows) with a good eye for distribution and a fairly good pass success rate of 82%.

The Wanderers already had to go through two regular season matches with Joao Morelli due to suspension, with Beland-Goyette being one of the midfielders who stepped up to fill that void. If he collects one more yellow, however, his team will need to step up for him, too.

The only defender on the list, the Wanderers fan-favourite has given away three yellow cards that all came in the last twenty minutes of different matches. The former Cape Breton University man has played every single minute of possible action in PEI so far, but given that he’s already picked up yellows against Forge and Cavalry it’s fair to say he’s one of the likeliest players to pick up a yellow card accumulation suspension in the postseason.

The 2020 Canadian Premier League season has seen Schaale partner with Jems Geffrard at the back, with the duo helping the Halifax defence concede just seven goals in just as many games (which ties them with Cavalry FC and York9 FC as the best defense in the league).

With Brazilian centre-back Eriks Santos having been unable to join the side for the tournament and Jake Ruby a clear depth option, the Wanderers backline may be forced to undergo a stress-test without Schaale in the group stage.

The former Ottawa Fury man has proven to be a great player and leader for Pacific FC, with the 31-year-old featuring in every game and scoring a goal against Forge. He leads Pacific FC for expected goals per shot (0.28), making 89% of his tackles and linking up strongly with Marco Bustos to form one of the most threatening midfields in the league.

The Pacific FC midfield has proven itself quite a capable machine, but Dixon’s ability to keep it organized while both on-and-off the ball could prove a challenge for the west coast side to replace should the veteran midfielder pick up a one match suspension.


There are seven players who are currently on two yellow cards, which puts them on an outside chance to potentially miss the final game of the group stage through yellow card accumulation should they pick up back-to-back yellows in the upcoming week. Five of them are defenders, with two from Cavalry FC and two from Forge FC making the list.

As the regular season of Island Games action has already proven, there’s a propensity for drama in a congested bubble tournament filled with tired legs, high tempo counters, and plenty of nerves that play in to matches that carry a lot of weight with them. What ultimately unfolds on the pitch at UPEI remains to be seen, but one thing is certain: should any of the above four players be sidelined for a match, they’ll be a big miss for their respective sides.