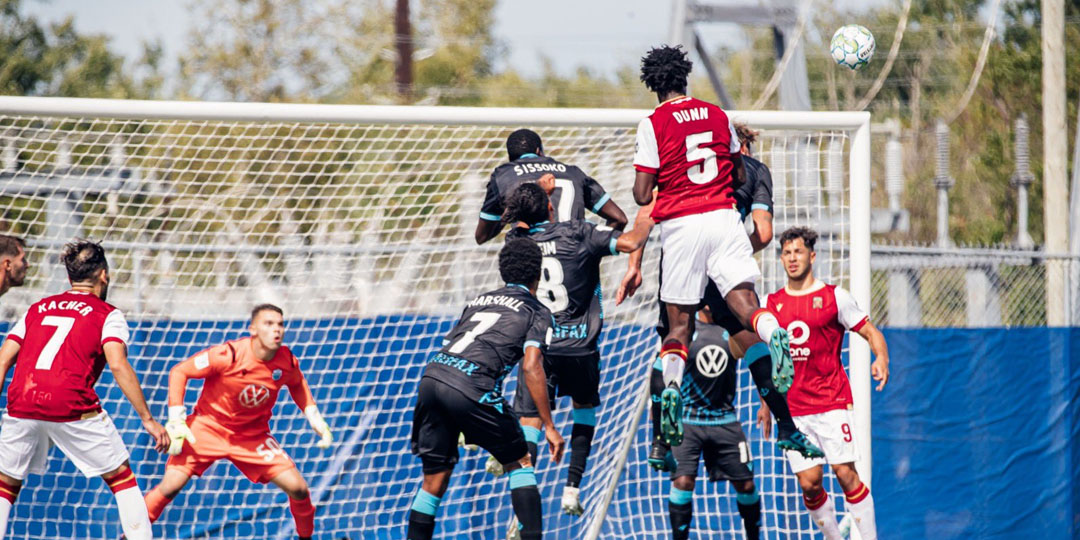 Charlottetown, Prince Edward Island played host to an fiery affair this afternoon, with the Halifax Wanderers coming out to a surprise two-nil victory despite Valour FC having dominated most of the game.

Both teams entered the match knowing it was now make-or-break time at The Island Games: a loss would eliminate the Wanderers, while a win for either side would go a long way to putting them in good position to qualify for the group stage.

Stephen Hart called upon Christian Oxner to continue his run in net, while giving Omar Kreim a start following his impressive performance against York9 FC. Andre Rampersad was rested for the match, with Aboubacar Sissoko entering the lineup and Akeem Garcia resuming his duties up front.


The Wanderers look to have broken through early with a great ball flying in to Cory Bent, who was only just offside (if so). The youngster has been one of the most impressive newcomers for the Wanderers so far, though it’s fair to say there’s certainly no shortage of contenders there.

Drama would ensue on the opposite end after a fast cross from Levis saw a headed effort cleared off the line, with Oxner missing the ball completely. On the replay, it’s a tough call as to whether the ball went over the line before N’sa helped to clear it.

Haitian international Andrew Jean-Baptiste then took a bad knock – not his first of the tournament – and was forced off the pitch. As a result, former Wanderers defender Chakib Hocine came on against his old team.

A fast, low shot from Masta Kacher flew just wide of the post, with the 24-year-old having scored an absolute rocket last week against FC Edmonton. Moments later, Ricci saw an opportunity go wide of the post, but the signs were there: Valour FC were making the most opportunities and were significantly out-passing their competition.

Trinidad and Tobago international Akeem Garcia found himself taken down at the edge of the box while taking a shot, which still didn’t miss by much. With Galan handed a yellow card for the foul, Alex De Carolis fired a freekick which deflected off Raphael Ohin to give the Wanderers the lead against the run of play!

Despite Valour’s dominance in the first half, things went from bad to worse for the Winnipeg-based side when a bad giveaway from Chakib Hocine saw him lose possession to Cory Bent, with the top CPL-U SPORTS draft pick firing home his first professional goal to double the Wanderers lead!

Despite some 64% possession, nearly double the passes, and firing seven shots to three, Valour FC went into half-time two goals behind their east coast competitors.

The second half would see Valour continue to press, with Ricci coming close and Brett Levis nearly seeing a shot deflect into the net after a partial block from Louis-Beland Goyette, who made it clear that he’d have no qualms celebrating a goal against his old side – though this one nearly went in for them!

With just over twenty minutes on the clock, Halifax nearly made a corner set piece opportunity pay when a tight-angled shot from Garcia found its way to Sissoko, but the former Whitecaps trialist fired his shot well off target.

Peter Schaale had a close handball non-call when his arm was tucking into his body, though the incident will give Rob Gale pause for thought: between that and the suspect off-the-line clearance, that could’ve been two goals for Valour FC.

Substitute Chakib Hocine went down in the seventy-sixth minute with a hamstring injury, with youngster Federico Pena replacing the man who had originally replaced Andrew Jean-Baptiste. New year, same problem: the VFC backline was in for a severe trial by fire through injury.

Pena would get a straight red card in the game’s dying minutes for a hard challenge on Andre Rampersad, meaning that Valour FC will need to play its final match with Pena suspended and both Jean-Baptiste and Hocine potentially out injured.

Riggi came close to opening his account for the Wanderers with a curled effort moments later, but Pantemis did well to dive low and parry the shot to safety. Despite a good performance from Valour FC for the majority of the match, the side saw itself fall two-nil to the Halifax Wanderers with ten men on the pitch.

As things stand, Valour FC will now need to hope for both a win in its final regular season match and for other results to go their way if they’re to reach the postseason. The club faces a tough tie against Forge FC to close out its Island Games regular season campaign. The match will take place at 12:00PM EST this Saturday, with CBC Sports airing a tape delay one hour later.

All things told, the Winnipeg-based club has shown significant improvement compared to the 2019 squad, with the club showing a much better defense, stronger attack, and a much faster rate of youth minutes.

The Halifax Wanderers will have an extra day of rest before closing out the season against expansion side Atletico Ottawa, who have proven to be somewhat of a wildcard this season in terms of results. The Wanderers have snuck a toe into a playoff spot, though Pacific FC could retake the spot this evening.