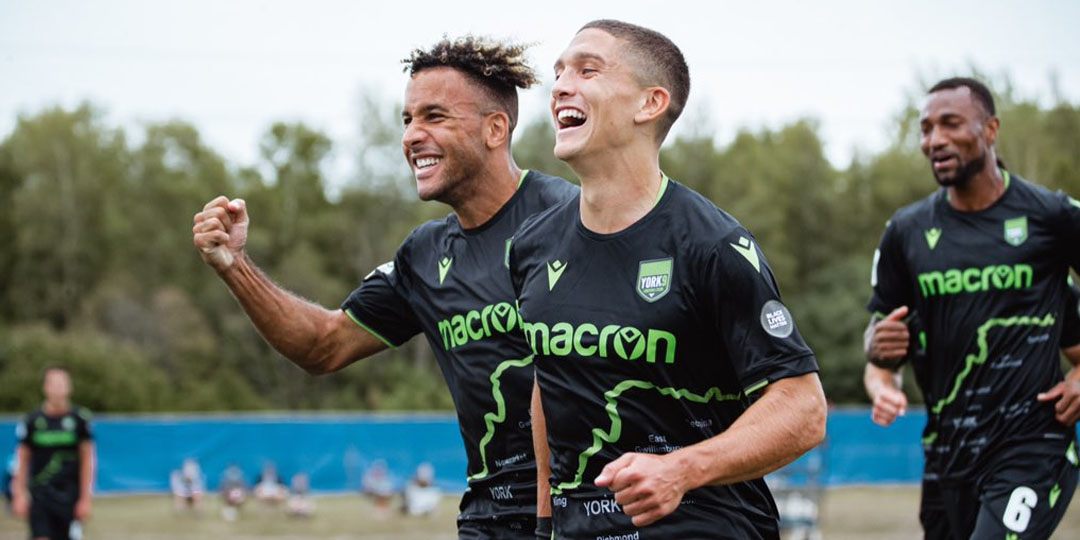 Both the Halifax Wanderers and York9 FC entered the pitch today knowing that a win would go a long ways to securing a top half finish for each respective side, especially after Valour FC’s win earlier today.

It was the Nine Stripes who looked the more likely victors, going a goal up as the Halifax Wanderers went a man down in the first half – though the Wanderers would see an added time freekick rescue a big point for the east coast side.


With Nathan Ingham out injured, York9 FC was forced to start 17-year-old goalkeeper Ezequiel Carrasco for today’s game, with emergency goalkeeper Evan Couturier (from UPEI) being called up for a bench role.

As revealed by the league today, a two-man emergency goalkeeper pool consisting of two athletes within the region has been curated for the Island Games. At the start of the campaign, the Wanderers rostered goalkeeper coach Jan-Michael Williams under similar injury circumstances.

Fugo Segawa would continue to fill in for the sidelined Abzi as well, with Alvaro Rivero starting up top ahead of a Nine Stripes midfield featuring Di Chiara, Aparicio, Telfer, Porter, and youngster Ijah Halley. Former Ottawa Fury manh Chris Mannella remains sidelined for the tournament so far.

After an impressive performance last week, it was little surprise to see Halifax Wanderers head coach Stephen Hart feature a front three of Riggi, Garcia, and Marshall, with Joao Morelli once again operating in a number ten role. On the opposite end, Christian Oxner’s run in net continued after an impressive match (and a penalty save) against FC Edmonton.

An early chance for York9 FC saw Luca Gasparotto get a headed effort on goal, but the ball was cleared off of the line by Akeem Garcia to keep things even in the game’s opening minutes.

Ten minutes later, standout midfielder Joseph Di Charia would cleverly feint beyond Matteo Restrepo to fire a shot in from a tight angle, with Oxner able to make the save after rebounding the ball straight up in the air. Di Chiaria has been in fine form at the Island Games, securing three goals from his first four matches.

Moments later, international players Alex Marshall and Akeem Garcia combined for a nice move, with Garcia chesting the ball down before being ultimately unable to convert a shot for what would have been his fourth goal in five games.

Twenty-two minutes into the match, Manny Aparicio opened his account at the Island Games after winning and taking a freekick from right outside the box, blasting an absolute rocket beyond Oxner to give the Nine Stripes a crucial lead:

More drama would quickly ensue with Brazilian midfielder Joao Morelli collecting a straight red card one minute later after elbowing the throat of Joseph Di Chiara, who has won more fouls for the Nine Stripes than any other player.

While paramedics did take to the pitch, Di Chiara was able to resume play after taking a few minutes to collect himself from what Jim Brennan called a ‘massively out of order’ challenge. Incidentally, Di Charia found himself on the receiving of a controversial elbow last year, too.

Morelli and the Wanderers, meanwhile, will be wondering what suspension will come with the violent conduct call, which could see the Brazilian suspended for the rest of the regular season. In short, it’s a suspension that could have huge ramifications for the Wanderers’ 2020 campaign.

The club had a red card shout of their own, too, with a high boot from Fugo Segawa catching Alex Marshall with studs to the face. Marshall was required to leave the pitch to stem the bleeding, with the Wanderers temporarily down two men as a result.

The first half would see fifty-one minutes of action, with the Halifax Wanderers able to keep things down to a one-goal game at the half-way point after being out-shot six to two.

The second half nearly got off to a wild start with Ryan Telfer trying to squeeze beyond two defenders in the box, with the Trinidad and Tobago international going down under pressure. Referee David Barrie made it clear no penalty shout was forthcoming.

What looked to be a well-timed run from Alex Marshall saw the Jamaican international close down on Carrasco, but the play was called back for a tight offside call. The youngster would be called into action moments later, reminding the Nine Stripes that the Wanderers weren’t going down without a fight.

To that end, substitute Cory Bent would later get the best of Segawa, instigating a Wanderers counter-attack that nearly saw Garcia through on net. The east coast side earned a freekick from the counter, which was smartly delivered by Marshall and forced a tight clearance from Gasparotto.

TFC Academy product Ijah Halley nearly forced Oxner into a save in the seventieth minute, with Jim Brennan then replacing the teenager with more young legs in Max Ferrari. With Carrasco making his debut tonight, York9 FC has now used five of its six teenage players.


Sturdy Wanderers defender Peter Schaale would pick up the fifth yellow card of the match from referee David Barrie, meaning that if he collects on more yellow he’ll get a one match suspension through yellow card accumulation.

Things got heated in the game’s dying minutes as an incensed Wanderers side demanded a penalty kick, with Di Chiara and Rampersad getting into things – in fact, an elbow from Rampersad could have seen things go from bad to worse for Halifax.

Both players collected a yellow card apiece for the altercation, with Joseph now joining Schaale as co-leader of the aforementioned yellow card accumulation table.

The Wanderers should have converted in the final minute of regular time, with substitute Omar Kreim lofting in a ball right to Garcia, who headed an effort straight at Carrasco. Had the header gone anywhere but the goalkeeper, it would have been an equalizer.

Thus far, both Kreim and Sissoko have seemed like wonderful pickups from the Montreal Carabins for the Wanderers.

The late game Halifax resurgence continued with Omar Kreim firing in a wonderful curled freekick that caught out Carrasco, rescuing a point at the death for the east coast side.

For York9 FC, it marks the second time a late game set piece has been their undoing, which will likely be a talking point for the Nine Stripes’ season as a whole.

The result means that York9 FC now finds itself back in third place after five games played, with the York Region team still the only undefeated side at The Island Games. Still, conceding in added time (again) will be a frustrating experience for the Nine Stripes, who will see this as two points lost.


York9 FC will close out its regular season matches against Albert-based competition, facing winless FC Edmonton on Tuesday before wrapping up against league-leaders Cavalry FC next Sunday.

The Halifax Wanderers will face more top half competition with a match against Valour FC scheduled for Wednesday, before closing out against wildcard newcomers Atletico Ottawa.