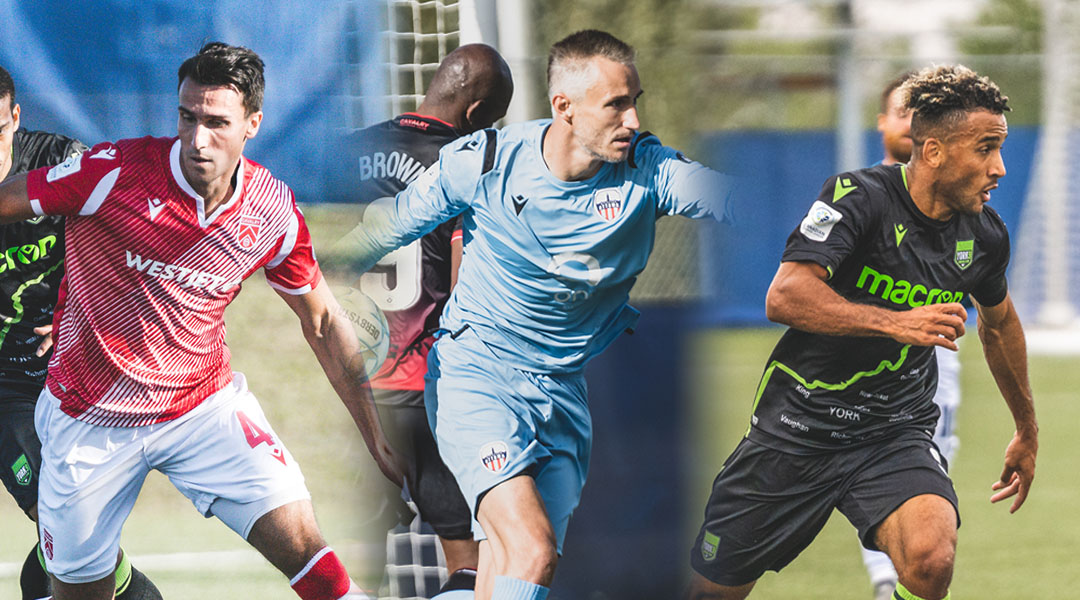 Despite that, there are ten players from the across the league who made it happen, representing six of the league’s eight teams. We’ve included the minute-leader from each CPL Finalist too, since neither of them had a single athlete who appeared for every single minute of Island Games action.

Without further ado, here are the ten Iron Men of the Island Games:

The Canadian Premier League expansion side proved to be a competitive force at The Island Games, with head coach Mista settling on a starting eleven which didn’t feature too much by way of rotation. While some minor player swaps, late game substitutions, and a few suspensions knocked most of the regulars out of iron man contention, two players participated in every minute of the team’s inaugural campaign: Spanish goalkeeper Nacho Zabal, and Canadian youngster Malyk Hamilton.

Zabal earned a starting spot ahead of domestic goalkeeper Ricky Gomes, making a league-leading 24 saves across 7 appearances as the expansion side found its footing. Former Cavalry FC youngster Malyk Hamilton found himself deployed as a right-sided full-back under head coach Mista, recording an assist against the Eddies and putting in a few good shifts which landed him likely just outside of a U-21 player of the year nomination.

While Transfermarkt will tell you Zator was substituted out in the final group stage match against Forge, that was actually Bruno Zebie – Dominick Zator completed a full 900 minutes for Cavalry FC, playing every single possible minute in Charlottetown under Tommy Wheeldon Jr.

Last year saw Cavalry FC standout Dominick Zator earn a national team call up from his consistent performances, and the six-foot-two defender proved to be one of the league’s best yet again at The Island Games. Zator became the first athlete to score in the competition (against rival side Forge FC, no less) and would go on to lead the league with an astounding 675 passes over ten appearances, appearing solid at the back and threatening on set pieces.

With all of that, it’s no surprise we were quick to name him the side’s best returning player after the tournament’s start.

Spanish defender Ramon Soria was a key player under Jeff Paulus last season, and things were no different for the centre-back this year: the 31-year-old played in all seven FC Edmonton matches, finishing the year with a fairly solid 82.2% passing rate and winning 70% of his aerial duels.

While it was a tough campaign for the Eddies, Soria stepped up and donned the captain’s armband for the majority of the year, something he only did once in the 2019 campaign. With only Mele Temguia accumulating more appearances for FC Edmonton in the CPL era, the 31-year-old will be expected to be a leader both on the pitch and off of it if he remains contracted to the Alberta-based club.

Over the span of his ten matches at The Island Games, Meilleur-Giguere made an astounding 25 interceptions (the second most in the league), while completing 613 passes and proving a consistent option for the west coast club.

While MacNaughton and Samake flipped places a few times, Meilleur-Giguere found himself a staple selection for new PFC head coach Pa-Modou Kah. Pacific FC conceded an astounding six penalties over the course of the tournament, with Meilleur-Giguere finishing his iron man season as the only PFC defender not to concede one himself.

Valour FC head coach Rob Gale will look at these two with mixed emotions: his iron men had great campaigns, but both arrived to the CPL side as loans and are no longer with the team.

Toronto FC loanee Julian Dunn brought his burgeoning career to new levels by way of forming a tight-knit centre-back pairing with Andrew Jean Baptiste, helping bring down the club’s average goals conceded per game from 1.86 in 2019 to 1.29 this season.

Meanwhile, 23-year-old Montreal Impact goalkeeper James Pantemis made great use of an opportunity to showcase his talent at The Island Games, recording two clean sheets and making 19 saves (the highest of any non-top four club goalkeeper beside Nacho Zabal). He returns to the Impact as the club’s only Canadian goalkeeper, but faces tough competition in Clement Diop and Evan Bush.

The Nine Stripes saw Jim Brennan rely heavily on a relatively unchanged defensive lineup, with the centre-back partnership of Gasparotto and Thompson featuring for every possible minute, and right full-back Morey Doner earning the nod for the entirety of the Island Games, too.

Last year saw Roger Thompson‘s season get off to a very late start due to injury, but the sturdy six-foot-three defender was fully fit for the duration of a York9 FC campaign which saw them knocked out of a playoff spot with five minutes left in the regular season. To his right, Morey Doner made plenty of good runs forward and proved to be a consistent defender, remaining a trusted selection for Brennan after breaking in to the Nine Stripes squad last May.

Of note, Luca Gasparotto has become the only Canadian Premier League athlete to compete in every possible minute of action for his club through two season running, with the 25-year-old now having racked up 3,204 minutes of game time for the York Region side – more than any other player in the club’s short history.

Belgian centre-back Daniel Krutzen just missed out on a full iron man campaign, having missed some 29 minutes of action by way of being substituted off against Valour FC in club’s final match of the regular season. The 24-year-old Genk Academy product led the league with 34 interceptions, while also completing the second-most amount of passes from any player this year with 647.

Krutzen also proved a threat on set pieces, scoring his first goal of the season against another iron man and scoring a group stage go-ahead goal against Pacific FC, too. Often coming in underrated in league play, Krutzen has actually accumulated more minutes for Forge FC than any other player in the club’s two year history – including team captain Kyle Bekker, who has racked up the second-most amount of minutes behind Krutzen.

Haitian international Jems Geffrard entered the campaign with less competition than was originally expected after Brazilian centre-back Eriks Santos was unable to enter the country. Fortunately for Stephen Hart, Geffrard stayed fit and formed a concrete partnership with fan-favourite Peter Schaale, with the six-foot-three defender playing all but 45 possible minutes of his side’s amazing Canadian Premier League campaign.

Born in raised in Montreal, the Haitian international counts as domestic player on the Halifax Wanderers roster. Stephen Hart had attempted to sign him last year, finally getting the move across the finish line in February. At just 26 years of age, Geffrard has plenty of minutes left to give at the professional level – though whether Hart can keep him in Halifax remains to be seen.


Interestingly, the ten full iron men are a complete split: exactly half are newcomers to the CPL, while the others took part in the league’s inaugural campaign. The quality of play seemed to have increased despite the pandemic situation precluding a traditional preseason, and it’ll be interesting to see which of the iron men will remain in the league come 2021.

The Island Games concluded over the weekend with Forge FC retaining the North Star Shield, qualifying for a Canadian Championship final against Toronto FC and securing entry to the 2021 Concacaf League. With ten players having proved crucial enough to lock in every possible minute at The Island Games, it’ll be interesting to see what’s in store for these players next year.