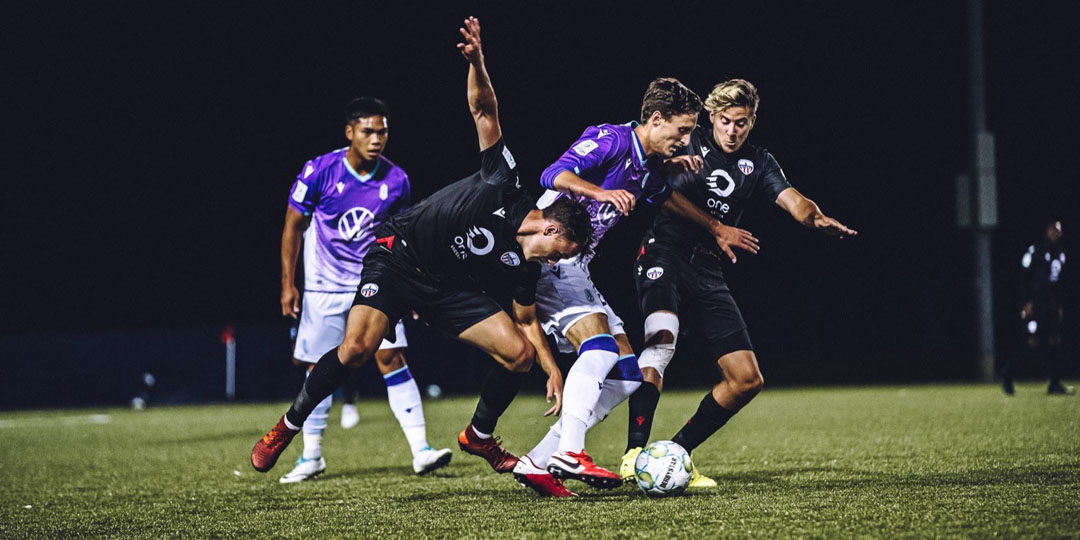 In a match where finishing was painfully absent in the final third, Atletico Ottawa forced home a late goal to keep the club’s group stage aspiration alight.

The result means that Pacific FC and Atletico Ottawa are now both on eight points in the Canadian Premier Table, but both sides will need favourable results next week if they’re to make the postseason stage of the competition.

Pacific FC coach Pa-Modou Kah elected to return Marcel de Jong to the starting lineup, with Kadin Chung rested on the right and Zach Verhoven stepping in to replace him. A front three of Blasco, Diaz, and Bustos returned, with the trio having played a big part in dismantling Cavalry FC a few days ago.


The opening minutes of the match saw both sides exchange chances, with a strong header fro MacNaughton going just over the bar and a great counter attack led by Malcolm Shaw being ended by a nice interception from Marcel de Jong.

Jamar Dixon showed a flourish of nice footwork to make space beside Kapor and fire off a fast-paced shot from within the box, but the effort went disappointingly high.

Against the run of play, Atletico Ottawa found itself with a great counter opportunity when a great pass saw Ben Fisk rushing towards the Pacific FC box. He unselfishly played it out wide to Malcolm Shaw, who’s low shot was blocked by PFC goalkeeper Callum Irving to keep the scores level.

A flashy run from Marco Bustos in the forty-first minute saw him nutmeg Kapor to get into space, with the shot deflecting out for a corner. The first half ended without a goal.

The second half got off to a promising start when Kapor conceded a freekick just outside the box after a handball call, but Blasco fired it wide of the net.

Atletico Ottawa had another great opportunity following a freekick minutes later, with Kapor heading a ball across the box to Viti Martinez, who’s tame effort didn’t pose a challenge for Irving.

Seconds later, Blasco got another repeat freekick attempt in a similiar spot just outside the box after a foul from Brandon John. This time the shot went into the wall.

Both sides had chances as the second half wore on, but the finishing for both teams left a lot to be desired. Ben Fisk nearly had the winner in the eightieth minute, but Irving dived low to save the shot from the Atletico Ottawa captain.

Moments later, Noah Verhoeven was in on net after a great lofted ball, but Nacho Zabal proved up to the one-on-one challenge with a fantastic leg save.

In a moment of absolute madness, the ball dropped for Malcolm Shaw right in front of the net, with Irving coming up big to make the save. The rebound came off a defender, with Irving punching that out for a corner.

Atletico Ottawa would get the breakthrough in the last minute of regular time, with Viti Martinez making good on the club’s second corner in a row to keep his team’s group stage dreams alive.

In the last minute of the game, Terran Campbell fired a quick shot that went just inches wide of the post, but the 21-year-old was still left goalless at the bubble tournament.

The final whistle would prove heartbreak for Pacific FC, with Atletico Ottawa taking a big three points this Wednesday night.


Pacific FC will close out its campaign against FC Edmonton on the final day of the regular season. With the Eddies already eliminated and winless at The Island Games, the west coast side will need to deal with players fiercely proving why they deserve contracts in 2021.

If Pacific FC are going to make the group stage, they’re going to need a result against the Eddies.

With Atletico Ottawa officially still in contention for the postseason, the club will close out its inaugural season this Sunday against the Halifax Wanderers, who will be playing another must-win match to keep their own hopes alive. The match will be available live on OneSoccer and CHCH TV.