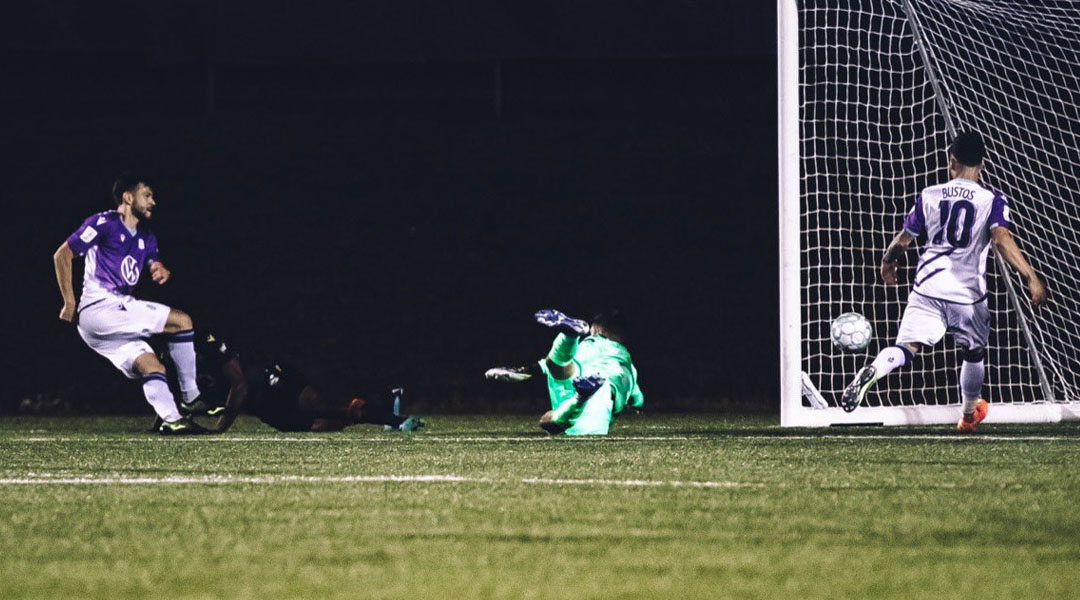 West Coast Canadian Premier League side Pacific FC recorded its first win of the Island Games tournament to leapfrog Valour FC up to third place in the league table.

The two clubs clashed on a wet evening in Charlottetown, Prince Edward Island that saw a fairly even game tilt in favour of Pa-Modou Kah, who made a passionate speech about supporting black lives ahead of tonight’s match.

After Nolan Wirth conceded five goals in three games for Pacific FC (including one due to poor distribution), Kah opted to give former Ottawa Fury man Callum Irving the start between the sticks. The lineup would see Kadin Chung and former Valour FC man Marco Bustos link up on the right flank once again, with Mexican forward Alejandro Diaz getting another opportunity to impress up top. 19-year-old midfielder Sean Young also made history as the first Victoria native to start for the side.

In a bit of history separated by plenty of physical distance, Matthew Baldisimo got the start for Pacific FC while his brother Michael made his MLS debut with the Vancouver Whitecaps.

Rob Gale continued to give the impressive centre-back duo of Julian Dunn and Andrew Jean-Baptiste the start, with Shaan Hundal returning to the starting spot up top and Masta Kacher adorning a number ten role behind him. Despite tonight’s 2-0 loss, the side has looked like a marked improvement over the 2019 roster.

The Tridents got things off to a great start when Chung – who has had a great first half of the tournament – slid in a low cross that went just in front of an outstretched Pantemis and underneath a slipping Dunn to allow Diaz to receive the ball and fire a shot beyond Pantemis for his first goal in purple-and-white:

The rest of the first half was fairly tame, with Irving running out to safely cut off a Valour FC chance, Dylan Carreiro making a good run resulting in a blocked shot, Bustos nearly edging in for a shot against his old team, and Jamar Dixon collecting his second yellow card of the season. It was a better half of Pacific, who recorded seven shots to Valour’s three while making one of them count.

A slow start to the second half eventually gave way to more back-and-forth action, with both sides instilling quick transitions in the hopes of catching their opponent out – though poor shot area selection did neither side any favour.


Hundal would come close to an equalizer in the sixty-fifth, making a darting run between Thomas Meilleur-Giguere and Lucas MacNaughton to force a tight save from Irving, with Hundal still unable to force home his first goal for Valour FC.

Toronto FC loanee Julian Dunn, who made an uncharacteristic defensive error earlier in the match, accidentally let another ball through in the second half. This time around, Pantemis was able to save the youngster from having more egg on his face by swooping up the resulting shot from Pacific FC.

Late-game fatigue set in for the Winnipeg-based side with Federico Pena going down hard with a cramp, with youngster Dante Campbell forced to come on as a result. This further builds on Valour FC’s impressive amount of domestic youth minutes, albeit not under great circumstances.

Sean Young found himself in space near the end of the second half, but the youngster was quickly closed down by veteran Andrew Jean-Baptiste to keep his side in the game. On the other end of the pitch, former York9 FC forward Austin Ricci saw his shot edge beyond Callum Irving, but the effort was cleared by Meilleur-Giguere.

Valour FC continued to press, but it was Pacific FC who would strike blood next when Victor Blasco made a great run and found himself with both space and time to settle a shot beyond James Pantemis, who was able to get an arm to the shot but couldn’t stop it from going in.

The late game drama continued (as it seems to consistently do in this tourament) with Austin Ricci being fouled by MacNaughton in the box, with team captain Dylan Carriero stepping up to take the CPL’s tenth penalty of the tournament.

For the first time this year, a goalkeeper made a penalty save with Irving diving to his right to stop the shot, which then deflected right back to Carreiro. In a moment the Canadian midfielder would like to forget, he then blasted his shot over the bar from close range as Valour FC fluffed a significant change to keep the side in the game.

Things almost got even worse for Valour FC when Matthew Baldisimo fired an audacious effort from well outside the box, forcing Pantemis into a fine diving save to stop the second half from getting even more lopsided – though the 2-0 scoreline does seem harsh for Valour FC.

No further action of significance would take place, with Pacific FC seeing out a 2-0 win over Valour FC. The Winnipeg-based side becomes the first side to miss a penalty opportunity at The Island Games, and drops to fourth place in the league table.

With five points now on the board, Pa-Modou Kah will now look towards a tough Sunday matchup against Cavalry FC, which will be available from coast-to-coast through both OneSoccer and CHCH TV.

Valour FC will be looking to shake off its second defeat of the season ahead of a Saturday noontime bout against FC Edmonton, with head coach Rob Gale stating that he was confident the attacking qualities of his side will show this weekend.