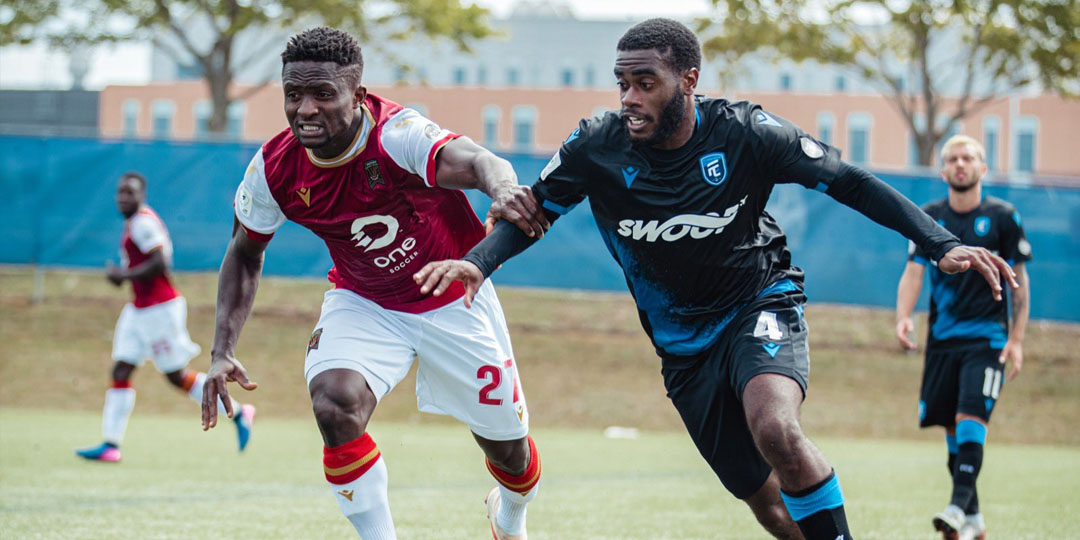 In a match with big ramifications for the top four ambitions of both Valour FC and FC Edmonton, a two-one win for Rob Gale’s side has greatly increased their chances of securing top half finish at The Island Games.

The result sees Valour FC rise to third place in the league table, with seven points after five games played. FC Edmonton, meanwhile, remains winless at The Island Games with a goal difference of minus seven.

Jeff Paulus recalled Easton Ongaro to the front line today, with the six-foot-six striker having struggled with knocks throughout the campaign. Behind him saw an increasingly familiar combination of Caceres, Boakai, and Aleman, who all came close to scoring a few days ago against the Halifax Wanderers.

Austin Ricci’s impressive chance creation saw the striker start up top for Valour FC once more, with Solomon Kojo Antwi earning his first-ever start out on the left flank with Cebara on the right, and further rotation seeing Jose Galan start in the middle of the pitch. As expected, the centre-back pairing of Andrew Jean-Baptiste and Julian Dunn returned, while youngster Dante Campbell found himself in for a test run at right-back.


The Eddies got off to a strong start in the match, making plenty of good runs and spending most of the opening fifteen minutes in the Valour half. Ramon Soria, donning the captain’s armband with Ameobi on the bench, nearly got things off to a flyer when a headed effort went just wide of the post in the game’s second minute.

Cebara force a ball through on the right flank in the twentieth, but his attempt to play the ball back to Raphael Ohin didn’t quite land for Gale’s team and the chance ended without a shot – a theme that would continue throughout the first half.

The Eddies continued to dominate after the Valour chance, regaining possession deep in the final third in the twenty-sixth minute with Aleman firing wide, and Easton Ongaro later seeing two great individual runs that didn’t result in any forced saves.

Despite the FC Edmonton dominance, the best chance of the first half fell to Raphael Ohin, who fired an absolute rocket from just outside the box that ripped just upwards of the net. Had it gone in, it would have been one of the best goals of the season so far.

As the first half entered its final minutes, a great run from from Austin Ricci saw him dart beyond two defenders and fire in a low cross which almost forced an own-goal from Duran Lee. Minutes later, Lee would pick up a knock that forced Paulus to replace him with Terique Mohammed.


After 45 minutes played, both sides went into the tunnels even with six shots fired but none of them being on target. After sparking a moment of magic against Halifax, Paulus would bring on Marcus Velado-Tsegaye to open the second half.

Cebara and Ricci would nearly link up in the Eddies’ box a few minutes later, but a timely interception from Jeannot Esua – who has impressed this season – stopped the play dead in its tracks.

A great through ball from Raphael Ohin would see Cebara one-time a great effort from the right side of the box which pinged off the crossbar, with Valour off to the stronger start in the second half’s opening minutes.

FC Edmonton would counter and see Easton Ongaro keep possession for an agonizingly long time in the Valour box, but the club would be forced to play it back out of the box under pressure, with the resulting effort ultimately being blocked.


FC Edmonton would then see former Eddies man Daryl Fordyce take to the pitch against their side, with the 33-year-old utility player now stepping onto the pitch for Valour FC. He scored 34 goals for the Eddies in the club’s NASL days, and to this day remains their top goalscorer.

Momentum would swing Valour’s way moments later, with Austin Ricci winning a contentious penalty for his side after appearing to be tripped up by Mele Temguia as both players approached the ball.

Fordyce (who else?) stepped up to take the shot, firing to the left with Connor James making the save. The rebound went right back to Fordyce, though, and he promptly knocked it into the opposite right side to score his first goal in Valour colours.

Valour FC has now scored two of its three penalty shots, with Fraser Aird taking the club’s first, and Carreiro missing the club’s second in a two-nil loss against Pacific FC.

While FC Edmonton haven’t been able to strike first at The Island Games so far, they have shown the power to fight back: substitute full-back Terique Mohammed fired a great cross in to Ongaro, with the six-foot-six striker converting the chance to tie things up late into the second half.

A great run from Esua on the right flank saw a cross cleared inches away from Ongaro shortly after, with the youngster nearly finding himself supplying the side’s first go-ahead goal of the Island Games campaign.

Ameobi came within touching distance of securing this in the eighty-sixth minute, when he fired a close-range chance that Pantemis got a piece to. The ball continued its momentum, going just wide of the net.

The miss would haunt FC Edmonton, with Valour FC then finding the net moments later with a tremendous right-footed rocket from Masta Kacher securing a big three points for his team.

The Eddies would push hard in the game’s dying minutes, with a last minute corner from FC Edmonton resulting in a close-range block before the final whistle saw Valour FC collect all three points.

With two games left to play for both teams, Valour FC now finds itself in a group stage position ahead of a tough end to the regular season: the club will square off against in-form Halifax Wanderers and reigning champions Forge FC to close out the first stage.

FC Edmonton – who’s hopes for a top half position are now all but done-and-dusted – will face York9 FC and Pacific FC before the regular season comes to a close at The Island Games.