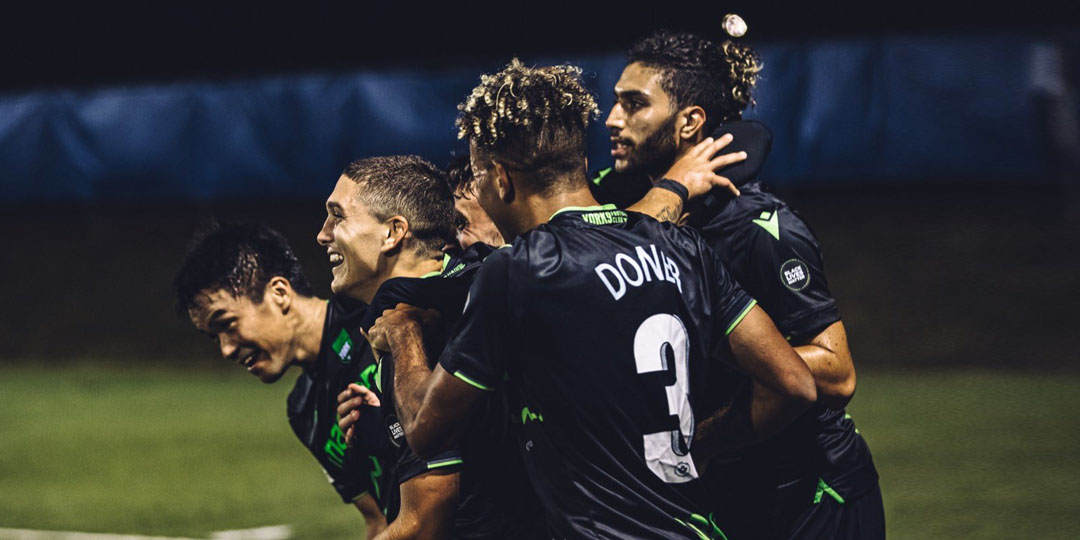 Tonight’s result means that York9 FC remain the only undefeated side in the tournament, though a remarkable amount of parity in PEI means that the club’s postseason placement still isn’t a sure thing.

On the other end of the table, the Eddies featured a heavily rotated roster that failed to secure the side’s first win at the bubble tournament after seven games played.


After missing his last match through injury, Nathan Ingham returned in front of an unchanged back line for the Nine Stripes. The club put out Diyaeddine Abzi as a left winger, which is a position he frequented back in his AS Blainville days. Alvaro Rivero was named the starting striker once again, with Porter, Telfer, Aparicio, and Murofushi rounding out the rest of the midfield.

While York9 FC’s leading midfielder Joseph Di Chiara missed tonight’s match due to yellow card accmulation, the bench did gain a noteworthy face: former Ottawa Fury FC midfielder Chris Mannella, who had missed the entirety of the tournament so far through injury.

FC Edmonton saw a big return of their own with Amer Didic, who missed every match following the club’s season opener. The club rotated in goalkeeper Dylon Powley for his first appearance of the tournament, with the 23-year-old having re-signed with the club last December a few months after he was initially released.

The first half opened to some back and forth action that saw York9 FC earn three set piece opportunities in a row, with Powley being tested on a few occasions on his first shift of the season.

While the Eddies had a few counter attacks, York9 FC would be the team applying the pressure for most of the first half. A run from Ryan Telfer saw him dribble beyond two defenders before Esua was able to stop the play, and shortly after that Abzi won a freekick right outside the box at the stroke of half-time.

It was a similar position to where Manny Aparicio scored an absolute rocket last week, and he channeled a wonderful freekick goal once again tonight for his second goal of the tournament:

For these keeping count, that was Aparicio’s fourth goal for the Nine Stripes: three came from direct freekicks just outside the box, while the other was an out-of-the-box rocket against Pacific FC that earned him ESPN Top 10 honours.

The second half opened up to a York9 FC set piece that saw Alvaro Rivero nearly net his second of the tournament, with his headed effort looping above the net.

Wataru Murofushi connected well with the chance outside the box in the sixty-first minute, with the fast-paced shot going just north of the crossbar.

The Eddies showed signs of danger from a set piece one minute later, though the ball went out for a goal kick. Moments later, another cross towards Ongaro went agonizingly just behind the tall striker’s run.


Murofushi then played provider for Telfer, with a wonderful high pass seeing the Trinidad and Tobago international through just steps ahead of Powley. With Telfer unable to get a clean hit on the ball, Powley safely collected the ball.

Wataru would be substituted off the pitch moments later, with Chris Mannella stepping on to make his debut for his hometown club.

A high ball for Easton Ongaro saw Ingham charge out, but the six-foot-six striker was able to chip an effort above the keeper that bobbled wide of the net. The match opened up, with a returning theme for both sides at The Island Games: The Eddies found momentum late in the game, while York9 FC struggled to close out the match.

In the game’s dying minutes, the pace of the match started to wean as the Nine Stripes held onto a one-nil lead at referee Myriam Marcotte’s final whistle.


The big three points sees York9 FC rise up to third place in the league table, with the York Region side having secured four draws and two wins to remain undefeated at The Island Games.

The club will now close out the regular season with a big match against Cavalry FC that could decide if Jim Brennan’s team has a group stage to look forward to.

FC Edmonton is now officially eliminated from postseason contention, with the eighth-placed side finishing its time in Charlottetown against Pacific FC this Sunday. Following that will come an offseason which could see head coach and interim general manager Jeff Paulus reconsider his position with the club.